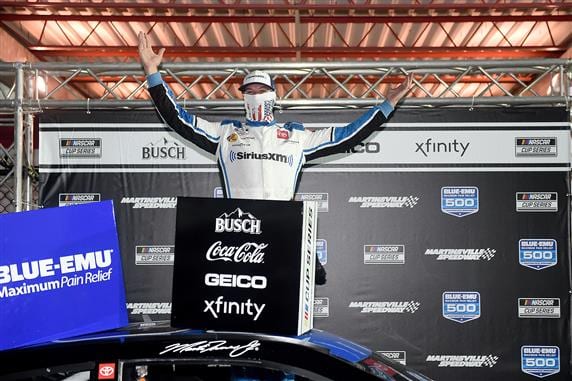 In a race where all Joe Gibbs Racing Toyotas encountered issues, Martin Truex Jr. was the stable’s lone driver to overcome a setback and win at Martinsville Speedway Wednesday night (June 10).

Truex raced his way back from a penalty after the stage one caution and took advantage of some lapped traffic to take the Grandfather Clock in the Blue Emu Maximum Pain Relief 500.

“We’ve been working a long time at trying to figure this place out, just chipping away at it,” Truex said. “The last couple of years we’ve been really strong. (2018) was a heartbreaker going at the end of the race there, last year to get the win and this year.”

Not only was this Truex’s second win at the Paperclip, but it was also crew chief James Small’s first victory, as longtime crew chief Cole Pearn retired after the 2019 Cup season.

The No. 19 car of Truex took the lead away from Brad Keselowski on lap 370 and never looked back.

Ryan Blaney finished second ahead of his Team Penske teammates Keselowski and Joey Logano, while Chase Elliott was the highest Chevrolet driver in fifth.

Just behind Elliott was his Hendrick Motorsports cohort Alex Bowman in sixth. Matt DiBenedetto finished seventh, then the Chevrolets  of William Byron, Kurt Busch, and Jimmie Johnson completed the top 10.

The race began with Aric Almirola quickly getting past polesitter Blaney for the lead. However, the caution flag waved within the first five laps for debris from Austin Dillon’s flat right-rear tire. Dillon’s troubles began on the first lap when his tire cut down, causing him to drop to the back. Soon after, the tire went down completely and left quite a bit of debris on the racing surface.

Caution! Early tire trouble for Austin Dillon in the No. 3 machine. pic.twitter.com/ecRFJpANfU

Dillon would later have to be removed from the car due to the heat and fumes entering the car thanks to crush panel damage, a panel knocked out from his tire incident. He was taken to the infield care center where he was treated and released.

Also during that first caution, Joey Gase’s No. 51 car left a battery pack on the track.

Almirola maintained the lead position from the restart until lap 20 when Logano passed him.

The No. 22 Ford Mustang led 234 laps in total but saw moments where he was overtaken by Johnson (who led 70 laps) and his Penske cohorts. One of the latter instances came when he, Keselowski and Truex approached some lapped traffic around lap 365. Keselowski got around Logano to lead a few more laps before Truex passed the No. 2 car.

Truex wasn’t the only one to overcome a penalty. Late in the race, Blaney’s tire changer had a slip up on pit road and the No. 12 car was penalized for a man being over the wall too soon. He restarted at the end of the leaders and worked his way through traffic all the way up to second place.

However, it was Truex who stood tall above the rest and claimed the victory.