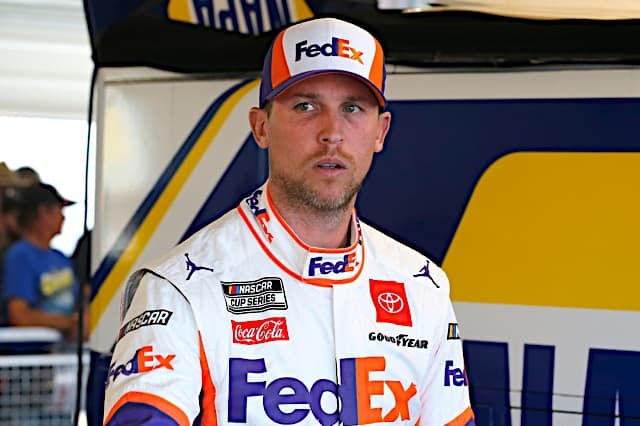 Denny Hamlin continues to move up a certain all-time ranking in the NASCAR Cup Series with his 2020 success, but it’s probably not a conversation he’d care to be part of.

Hamlin has two wins thus far in 2020, the most recent coming in the second Darlington Raceway event of the season last month. That puts him tied for 20th on the all-time Cup wins list with 39 victories since 2006, drawing even with Tim Flock and Matt Kenseth.

But Flock and Kenseth have something Hamlin doesn’t: a Cup championship. In fact, so do most of Hamlin’s contemporaries ahead of him on the all-time wins list.

With his latest win, Hamlin draws nearer the mark for the second-most wins in Cup history without a single championship to a driver’s name. One more and he’ll tie Mark Martin, one of the sport’s most famous non-champs, who scored 40 Cup wins over a two-decade period but never hoisted the title at season’s end.

Martin is 10 victories behind the all-time leader in this category: Junior Johnson, who won 50 times between 1955 and 1965 but finished no higher than second in points, twice. (To Johnson’s credit, he went on to be a multi-time title-winning owner in the series.)

Martin’s woes actually stretch deeper, though. In addition to having the second-most Cup wins without a championship (and, to boot, five runner-up points finishes), he’s also in the top 10 of the winningest — but title-less — drivers in both the Xfinity and Gander RV & Outdoors Truck series, too.

In fact, Martin notched 49 Xfinity wins between 1987 and 2011, but he could only manage a top points finish of eighth that first year, making him the Xfinity competitor with the most wins but no title. Meanwhile, in the Truck Series, he’s tied for seventh all time in this category thanks to seven wins in the series between 1996 and 2006. Of course, a championship eluded him in part because he never tried for one, only competing in over half the season once, when he competed in 14 of 25 events in 2006 and finished 19th in points.

Most of the top 10 drivers in each series without a respective title have long since moved on from the sport. On the Cup side, Hamlin is the only active full-time competitor,with Dale Earnhardt Jr. (tied for six; 26 wins) the only other driver still racing, albeit rarely. And in the Xfinity Series, the championship-less racers still driving (such as Joey Logano, Matt Kenseth and Christopher Bell) may never compete for a championship there again, barring a step down from Cup. Truck Series? Same situation; though who knows, perhaps Kyle Busch will try to lead his self-owned team to a title following his Cup retirement.

Here’s a rundown of all three series’ top 10s, including each driver’s best points finish, from Martin’s five runner-up finishes to Dale Earnhardt never even coming close to an Xfinity title (not that, of course, he ever tried).

Most Wins Without a Championship, NASCAR Cup Series

Most Wins Without a Championship, NASCAR Xfinity Series