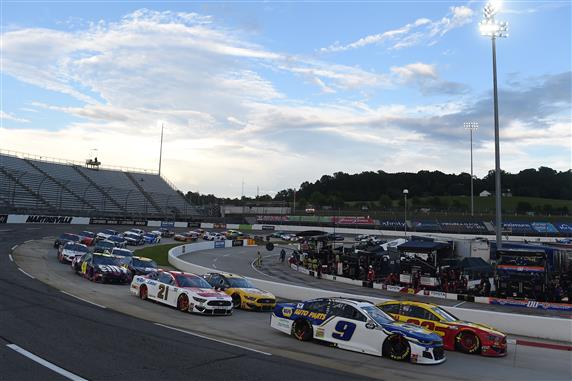 Martin Truex Jr. wasn’t happy with the No. 19 early on at Martinsville Speedway, but as the night wore on, it got better, and better … and better. And once he got to the lead in the final stage of the race, it was lights out for everyone else. Truex was able to open up a lead of over four seconds at the checkers. His Joe Gibbs Racing teammates didn’t fare quite as well, with Kyle Busch, Erik Jones and Denny Hamlin finishing out of contention in 19th, 20th and 24th, respectively, but Truex made sure the trophy went back to the shop anyway.

The Team Penske Fords were hot all race long, and that extended to quasi-teammate Matt DiBenedetto for satellite team Wood Brothers Racing, who scored his first top 10 at Martinsville with a solid seventh place. The No. 21 team has made some gains this year after struggling in 2019 with Paul Menard. DiBenedetto is a talented short-track driver, and that made for a great combination on Wednesday night. DiBenedetto has been improving steadily since moving to the No. 21, the best ride he’s had by far in Cup, and it’s looking like a fruitful match so far.

No track has been in NASCAR longer than Martinsville — it’s been a part of the sport as long as NASCAR has sanctioned races. But until Wednesday night, the little half-mile nestled in Virginia’s foothills had never hosted a NASCAR race under the lights. It was a typical Martinsville race, with plenty of bumper tag and some short tempers, but it was also a solid race with lots of comers and goers and plenty of battles throughout the field.

And if this preview video, with the grandfather clock ringing in a new era, didn’t give you goosebumps, I don’t know what will.

Polesitter Ryan Blaney fought his car from the drop of the flag.  By the time the competition caution came along, Blaney had lost a lap to Joey Logano, and the frustration was palpable. But the No. 12 team didn’t let it get to them. They were able to get back on the lead lap, and from there, Blaney had one of the fastest cars on track. As the laps ticked away, he made his way up to the lead … and then came a round of pit stops.  Not only did a tire changer drop his air gun, but Blaney was penalized for a man over the wall too soon, dropping him to the back of the field on the restart.  It took him the rest of the race to recover, and he did recover to finish second, but it was still a disappointing finish for the driver who looked like he had the car to beat.

Atlanta winner Kevin Harvick had a solid opening run. A couple of spotters reported smoke coming from the No. 4 around lap 95, and Harvick soon was reporting a dead battery. He was able to continue with the backup, scoring first stage points, and raced in the top five for a good portion of the night, but he struggled late in the going, dropping out of the top 10 to finish 15th, a lap down to Truex.

Active Martinsville win leader Jimmie Johnson started 21st, which can mean a long, difficult race at Martinsville, but he mowed his way through the field early, gaining 17 spots by lap 40. However, he used up his Goodyears in the process, dropping from fourth to sixth by the time the competition caution flew at lap 50. He recovered to finish third in stage 1. Stage 2 was vintage Johnson, with the driver taking the lead from Logano and then stretching it out. He struggled on short runs and restarts, though, and that’s never good at Martinsville. As the night wore on, the No. 48 got tighter and tighter, and Johnson had to settle for 10th. It was a solid night but not the one the team needed.

Defending spring Martinsville winner Brad Keselowski definitely didn’t hit the setup early on, and as a result, his teammate Logano lapped him before lap 50. That’s usually the kiss of death at Martinsville, because the leader laps cars at a rate that makes getting laps back extremely difficult. But like teammate Blaney, Keselowski made it happen, and from there he was able to march forward. After an epic battle with Logano for the top spot, he wound up third to Truex.

Along with the smaller spoiler NASCAR mandated for short tracks this year, Goodyear brought a softer tire than we’ve seen at Martinsville in some time, and the tire wear made for some great racing and fantastic strategy. Saving tires on long runs was more important than it has been at Martinsville for some time, and tires proved more valuable than track position in the pits — Wednesday night, two tires was not a wise option.

This is one direction NASCAR should be looking at. The more tires wear out, the better the races generally are. And yes, there is a safety aspect—we need tires that wear out, not blow out. There can be a fine line, but Goodyear has done well, and this tire was a great choice.

The next race is just a few days from now, and it’s the first one where teams will have to travel more than a couple of hours from home as all three national touring series head to Homestead-Miami Speedway. Like Atlanta and Martinsville, HMS is a track teams don’t have a lot of information on running in the summer heat. The track has had a late fall date since it came on the scene and was supposed to run in March this year. The current forecast is for 84 degrees, and they’ll be humid days with a high chance of thunderstorms. The following weekend features Talladega Superspeedway with a current forecast of 90 degrees and thunderstorms.

Modern cars are very sealed off, and, as we saw in Atlanta, the heat is hard on drivers. These next two races will especially be a test of how they handle it.

Austin Dillon wasn’t feeling well after the heat from his exhaust system was able to enter the cockpit on the No. 3 due to a damaged crush panel. Dillon was helped from the car and was awake and alert according to team communication.

So maybe the real question here should be how come he was allowed to continue racing with a damaged crush panel? It’s not an area of the car that’s often compromised, but if it is, it should be a mandatory fix before allowing the driver to continue.

That’s because an ill, woozy driver is a potential hazard to others as well has jeopardizing his own health. If he can’t concentrate behind the wheel, even for a fraction of a second, things could go south fast. NASCAR should look at Dillon’s exit as an opportunity to make a safety mandate to prevent it