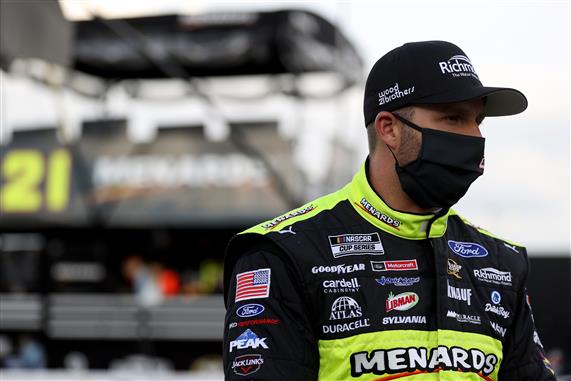 A race at Homestead-Miami Speedway in June? Yep!  Get your daily fantasy NASCAR DraftKings rosters ready for a sizzling summer race near Miami.

The NASCAR Cup Series heads south to Florida for the Dixie Vodka 400 on Sunday, June 14 at 3:30 p.m. ET. Local FOX stations as well as MRN radio will provide coverage of the 267-lap event.

This race was originally scheduled for March but postponed because of the COVID-19 outbreak. Additionally, there won’t be any practice sessions, as has been the case since May, since NASCAR is trying to limit the number of people at the track. The starting lineup’s already been set, and Denny Hamlin was randomly drawn to start from the pole.

Just like last Sunday (June 7) at Atlanta Motor Speedway, drivers will encounter heat and high tire wear at Homestead. Those who manage their Goodyears well will probably be in the hunt for the victory by the end of the race. Since there’s already been a few races at abrasive tracks, you can use previous data from those events to form your DraftKings lineup.

Before I move on to this week’s picks, here are the results from Wednesday night’s race (June 10) at Martinsville Speedway.

On the plus side, the top two finishers of the night were in this lineup, providing max value for your team. Unfortunately, Aric Almirola and Hamlin encountered issues that set them back early on. Both drivers never recovered and their totals hurt the overall DraftKings score.

Harvick is good at many tracks, and Homestead is certainly one of them. The Folds of Honor QuikTrip 500 dominator from last weekend has 12 consecutive top 10s at Miami. In fact, the last six results were top fives, which is an incredible streak. Additionally, he’s led 278 total laps in the past six races and recorded 168 fastest laps in that span.

In addition to Atlanta’s win, Harvick held command over The Real Heroes 400 at Darlington Raceway, the first race back from the COVID-19 break. The No. 4 Stewart-Haas Racing pilot led 159 laps en route to that victory, which boosted his DraftKings score to 129 fantasy points. At Atlanta, he again topped the 100-point mark on DraftKings after leading 151 laps.

Both those intermediate tracks are rough on tires, showing Harvick knows how to make them last as much as he needs them to. You should definitely consider him in your lineup.

Although Truex’s track history isn’t quite as impressive as Harvick’s, he does have a Homestead win in 2017. He also has led 201 total circuits in the past three years here, including 103 in last year’s runner-up campaign.

You might also remember Truex as Wednesday night’s winner at Martinsville. The No. 19 Joe Gibbs Racing driver scored 112 DraftKings points, thanks in part to 132 laps led and 58 fastest laps. He was also pretty good last Sunday at Atlanta; he led 65 laps and had 53 quickest laps, which helped increase his DraftKings score to 92. Truex has some strong momentum coming into this race and is surely a favorite to win.

OK, so Homestead hasn’t been DiBenedetto’s best course. Don’t let that deter you from using him in your roster, though. The No. 21 Wood Brothers Racing competitor finished seventh at Martinsville and ninth in the Toyota 500 at Darlington, both races held on Wednesday nights. Additionally, back in February, DiBenedetto came in second at Las Vegas Motor Speedway and earned 59 DraftKings points. He’s only landed outside the top 20 twice so far this year.

Since DiBenedetto’s starting 23rd on Sunday, there’s a good chance he can rack up position differential points should he climb to a top-15 finish. That’s a good bet.

Homestead has been a familiar and successful place for this rookie Cup driver. Reddick never finished outside the top five at Homestead when he was in the NASCAR Xfinity Series, and it’s the site where he earned back-to-back championships.

Although Cup cars are vastly different from Xfinity, Reddick has still performed fairly well this season. He’s got two top-10 finishes since the sport’s return from COVID-19 quarantine: a seventh at Darlington and an eighth-place finish in May’s Coca-Cola 600. The No. 8 Richard Childress Racing wheel man gained 22 positions in the Darlington event and scored 64 DraftKings points.

This time, Reddick will start just behind DiBenedetto, so he also can earn bonus points for each spot he grabs on the track. Expect him to be the best of a competitive rookie bunch.

Fellow rookie driver (and Harvick’s SHR teammate) has had a rough year thus far, but Custer does have a few top 20s and one top-10 finish. That ninth-place result came at Phoenix Raceway, earning 42 DraftKings points for that performance. In addition, Custer scored 38 fantasy points at Atlanta, a race where he gained 12 positions to end 19th.

Like Reddick, Custer has done very well at Homestead in the Xfinity Series. In fact, he only finished outside the top two once, which was in 2016, his first year running the race. Also, keep in mind Custer is starting Sunday’s event much deeper in the field than Reddick, all the way back in 35th. If he can somehow find speed and move up early on, Custer should have at least another top-20 result – and plenty of extra points to go with it.

McDowell is mainly here due to his price. I mean, really, what is DraftKings trying to do? Since Phoenix, the only race where McDowell ended worse than where he began was at Charlotte Motor Speedway’s second event. That was to be expected, and I had hoped he would at least get a top-20 result there. Still, McDowell’s earned around 30-48 DraftKings points in the other races. It’s an impressive run of consistency as the veteran has kept the car in position for a respectable finish.

This Front Row Motorsports veteran should again earn about 30 fantasy points Sunday, as long as he gains about 10 positions or more. A 30th-place starting spot should leave him in easy position to do so.

The DIXIE vodka 400,but no confederate flags? hmm don’t get it.