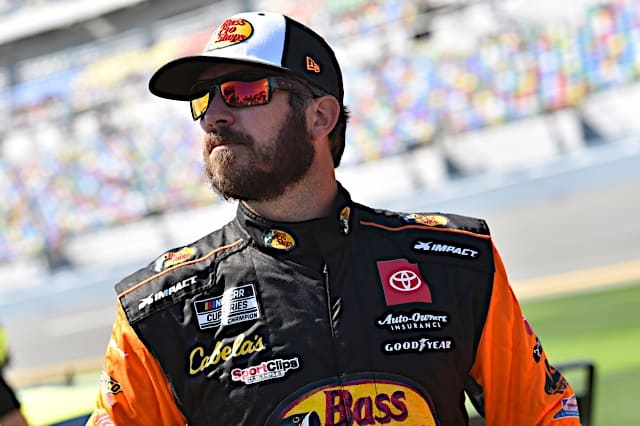 Homestead-Miami Speedway, long home to the season finale to NASCAR’s season, will instead be just the 12th stop of the year for the NASCAR Cup Series.

This is going to be a very bizarre race as far as who can be competitive. A lot of teams have notes for this track for November. Take a step outside; it’s not November. The temperature for the Cup race is threatening to go into the 90’s, and the humidity is going to make it even warmer then the thermostat reads.

Combine that with no practice or qualifying, and the fact that the driver many consider to be the all-around best at this track, Kyle Larson, is not in the field this weekend, makes this a tough week to theorize daily fantasy rosters. Still, however, there’s at least some knowledge to base your lineup off of.

Homestead was already one of Truex’s best racetracks on the calendar prior to joining Furniture Row Racing in 2014, but since moving to the No. 78 (and then migrating to the No. 19 car at Joe Gibbs Racing), Truex has been very good at this mile-and-a-half.

A crash took him out of the 2016 race. Since that day, however, Truex has not finished outside of the top two, with a win in 2017 for both the race and the championship. What’s more is that everybody in the No. 19 camp is going to be so energized coming off that big win at Martinsville Speedway earlier this week.

Blaney hasn’t had a whole lot of success at Homestead, with a best finish of just 11th. However, something has got to give soon with this No. 12 team.

Prior to the COVID-19 shutdown in early March, Blaney was arguably the quickest Ford driver. Since returning four weeks ago, the No. 12 team has struggled with inconsistency. Blaney is now the only Team Penske driver without multiple wins, let alone a single win. While Blaney is probably not in danger of missing out of the playoffs, he’s going to need to start getting those wins (and playoff points) soon if he wants to make a run for the championship this fall.

It’s simple: Johnson is due for a win. The seven-time champion has shown speed at various points this season, but just hasn’t put everything together yet and get that elusive win. One of these weeks, he’s going to get the win with how well the No. 48 team has been running.

Johnson’s Homestead resume deserves a bit of an explanation. For quite a few of those races, Johnson’s main goal was not to win the race or even place as well as possible, it was to win a championship. When Johnson has needed to rise to the challenge and actually needed to win in South Beach, he’s proven to actually do fairly well at the mile-and-a-half, winning in 2016 after starting at the tail of the field.

Reddick has done very well for himself in his rookie season, being just 26 points out of the playoffs and has kept pace with veteran teammate Austin Dillon in points. Richard Childress Racing’s intermediate program seems to be finding a rhythm this season, with both of Reddick’s top-10 finishes coming at Darlington Raceway and Charlotte Motor Speedway in recent weeks.

Success in the NASCAR Xfinity Series doesn’t always translate to Cup Series results, but Reddick has proven to be very competent at Homestead in that series. In three starts at the oval Xfinity competition, Reddick has won two races and another top-five finish on his resume. Solid.

It’s always going to be a very emotional situation whenever Nemechek will race at Homestead in his career. This is because John Nemechek, brother to Joe Nemechek, sadly lost his live at this racetrack in 1997 while practicing for a NASCAR Gander RV & Outdoors Truck Series event. John Hunter was born a few months afterwards, and named in honor of his late uncle.

Once a rookie starts visiting these racetracks a second or third time, their experience at the track starts to pay off for the ones who “get it.” Nemechek has done very well for himself this season, especially since coming back, fitting him on that bill. At this price, Nemechek would be a very solid pick to round out roster.