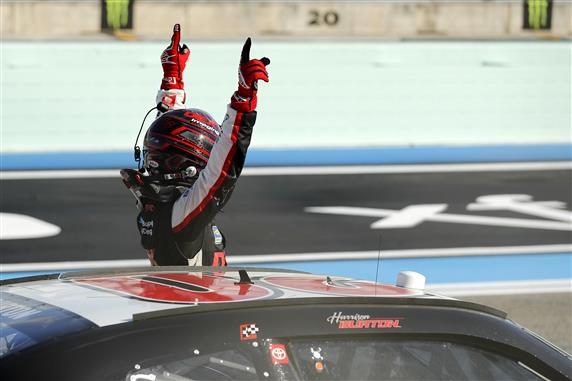 Nineteen-year-old Harrison Burton came out of nowhere to win the Hooters 250 at Homestead-Miami Speedway on Saturday (June 13) afternoon, his second win of the year and his young career.

The second-generation driver got around Noah Gragson on the final restart to lead the final two laps of the race, the only laps he led all day.

“I don’t know what I was doing either, honestly,” Burton said to FOX. “What a race. This track is so much fun, really puts it in the driver’s hands, especially at the end there, and I’m just ready to go again tomorrow. … I want to get two.”

Saturday’s race was the first of two NASCAR Xfinity Series races this weekend at the Florida track, comprising half of a four-race weekend for the three national touring series.

Burton started on pole for the race by virtue of random draw, but the start was prolonged due to several incidents of debris on track. The culprit was Chase Briscoe‘s car, which dropped a block of tungsten and forced the No. 98 to pit road – Briscoe was six laps down by the time he rejoined the track.

Gragson jumped to the lead immediately as Burton drifted back to third, and Ross Chastain filled the runner-up spot for the time being. Gragson led until the competition caution flew at lap 20.

Austin Cindric worked his way into the picture by the time the yellow flag flew, and Dale Earnhardt Jr., in his only race of 2020, was seventh when the field was frozen.

On the restart, Chastain got the lead the same way Gragson did at the start of the race: by being second but having the inside line into the first set of turns. Using the early cycle of pit stops and varying strategies, Ryan Sieg shot to the lead and won the first stage, the second of his career. Sieg was joined by a few other underdogs in the top 10: Alex Labbe, who ended the stage in fifth; Kyle Weatherman, coming across the line sixth; and Joe Graf Jr., finishing the stage in 10th.

Gragson and Chastain spearheaded the restart, but their battle for the lead allowed Cindric to draw closer and eventually pass both for the top spot and pull away. Cindric didn’t get far, though, as the first caution for incident flew after a crash involving Brett Moffitt and Vinnie Miller.

This time, it was Chastain and Cindric battling for the point with Gragson and Earnhardt looking for an opening. Gragson made the most daring move of the race to move up to second – sailing his No. 9 Chevrolet into the turn, passing both Earnhardt and Cindric.

Gragson used that momentum to grab the lead, which led to Chastain, Earnhardt and Cindric staging a battle for second, third and fourth. The trio swapped places multiple times before Cindric, who had fallen back, came out of nowhere to pass both for second by the end of the stage.

Meanwhile, Briscoe was passing cars left and right in an attempt to get his laps back, driving around the leaders to get one back and getting the free pass when the stage 2 caution flew.

Earnhardt got the lead for the first time by winning the race off pit road, but quickly lost it when the field scattered on the restart. Gragson, behind his JR Motorsports boss and teammate, was hooked by Justin Haley. Gragson saved the car, but Earnhardt was left without any help behind him and could only watch as Chastain, Brandon Jones and Cindric raced by.

The battle between Chastain, Earnhardt and Cindric became an all-out war for the lead, as the three traded places early and often, the drivers using slide jobs left and right. Earnhardt never led at the line, but Chastain and Cindric swapped leading laps four times over 20 circuits.

By that time, Gragson worked his way back through the field and eventually to the lead, sitting in prime position when the final round of green-flag pit stops started. He nearly fell out of contention when he smoked his tires coming to pit road, but avoided a speeding penalty.

Sieg cycled to the lead while he stretched out his run, eventually losing the lead to Gragson and pitting after the fact. Gragson continued to run all out as the laps waned, tagging the wall several times but never suffering significant damage. He had a 10-second lead over Earnhardt when the caution flag flew for the last time, a result of Sieg spinning in the corner.

Staying out longer than anyone else was Briscoe, hoping for a caution, but he had pitted just before Sieg’s spin. That ended Briscoe’s hopes of contending for the win, as the No. 98 went back a lap down and wasn’t the first car a lap down. Briscoe did take the wave-around as the lead lap cars pitted but was mired back in 10th at the restart.

Gragson was on point for the restart with Burton on his outside and teammate Earnhardt behind him. Gragson got the better jump on the restart, but Burton switched lanes in the first turn and drove up alongside the No. 9. Cindric then made it three-wide into turn 3, briefly taking the lead and nearly making contact with Gragson.

Burton, Cindric and Gragson were three-wide at the white flag, and the former two got a huge run into the first set of corners, leaving Gragson only able to watch as Burton cleared Cindric and the leaders became single file down the backstretch. Cindric tried to get a run on Burton as the pair exited turn 4, but the rookie held on to win at Homestead.

“I’m so excited,” Burton said in his post-race interview. “That’s so awesome. I gave away the lead on the first restart in the same position and I didn’t really want to do that again, I knew the 9 was going to drive in real deep and slide up, so felt good about that…we worked on this thing so hard every day and every run…made it better and better and what a day to get…in victory lane.”

It’s Burton’s second win of the season and of his career after going winless last year in the Gander RV & Outdoors Truck Series. The rookie joins Gragson and Briscoe as the only drivers to win multiple races in 2020, and he’s the only driver to win from pole this year.

Despite leading 83 laps, Gragson had to settle for third.

“It was tough … restarts were just the biggest struggle,” Gragson said to FOX. “I was really proud of my restarts here last year and just couldn’t get them going. … But I thought were were going to be able to come home with the win today running the top. That was so much fun.”

Earnhardt finished fifth in his only race of the season, leading four laps and running in the top five much of the race.

“That was a lot of fun,” Earnhardt said to FOX. “This is a top, elite form of motorsports in my mind, next to Cup, and it’s not easy to get out there and compete with [these] boys. They’re so, so good and race so hard, and my time’s running out.”

The Xfinity Series returns Sunday, June 14, with its second race at the track in two days. This race will be the second of the four Dash 4 Cash events, with Gragson, Haley, AJ Allmendinger and Daniel Hemric going for $100,000. The Contender Boats 250 will take the green flag shortly after noon.