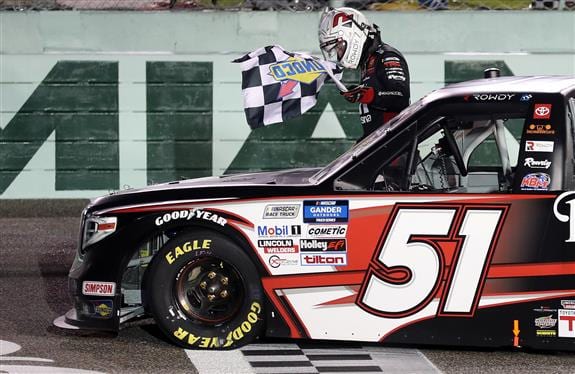 Busch was penalized heavily before the race. His No. 51 Toyota Tundra failed inspection due to a violation regarding track bars on his truck. The owner-driver was tapped to serve a pass-through penalty, in addition to starting at the rear of the field and the team being docked 10 points.

Austin Hill, the defending winner at the track, started on pole after a random draw set the lineup for the race. Busch took his pass-through on the first circuit, managing to stay on the lead lap.

Hill led an uneventful 15 laps until the competition caution flew, fighting off a hard-charging Grant Enfinger in the early stages of the run and eventually pulling away. Ross Chastain, pulling double duty after the earlier Xfinity Series race, started 15th and rocketed to third by the time the yellow flag was displayed.

The ensuing restart only lasted a lap, though, as a massive crash marred the first lap under green. Zane Smith got loose on the bottom of the racetrack, chasing his truck up into GMS Racing teammate Chase Elliott. Smith’s truck slammed the outside wall and was hit by Brett Moffitt, another of his stablemates on the Chevrolet team.

Moffitt and Smith’s days were done, the former’s night mirroring his afternoon, as Moffitt was involved in an early crash in the Xfinity Series race just a few hours before. Elliott’s truck survived with minimal damage.

With just a three-lap sprint remaining in the first stage, Chastain drove by Hill for the lead with some help from Ben Rhodes, winning the opening segment of the race.

Busch, who stayed out during the pit stops at the end of the stage, took the lead from Kyle Busch Motorsports teammate Christian Eckes and held on to win an uneventful second stage.

As the field behind him battled for position throughout the top 10 and beyond, Busch continued to lead until green-flag stops cycled around again. The caution eventually flew at lap 105 when Korbin Forrister hit the wall, and that quickly changed to a red-flag situation. Sheldon Creed was called to pit road late and turned down, only to crash into the barrels at the end of pit road. The incident led to a 16-minute red flag and lengthy cleanup.

Another caution flag flew soon after when Jordan Anderson hit the wall, giving way to a green flag with just seven laps left. Busch, Chastain and Hill fanned out three-wide for the lead on the restart, but Busch was able to clear both competitors on the backstretch and check out with the lead.

On the move in the waning laps was Tyler Ankrum, who outran Chastain and drove up to second.

“The last restart there with Ross behind me, he got a good launch and I got a good shove from him down the frontsretch,” Busch said in his post-race interview, “Just had to give him room. We just tried to race it out on the outside and see what happens off of turn 2 — just able to get that momentum around the outside, I didn’t lift much through the corner and just got that run [and was able] to get away. So, really good race for us and proud of everybody at KBM, proud of the effort. I know we’ve got issues and we’ll continue to work on that and get better.”

Ankrum’s runner-up finish is his first result inside the top 10 in 2020.

“We spent most of our time 15th-20th,” Ankrum said. “We short-pitted one time, just try to get off cycle on tires and that didn’t work. …We just struggled with the setup all night, and those last two pit stops we hit something — just a spring rubber in the right rear and we took off from there.”

The Truck Series will return to action on Saturday, June 27 for the Pocono Organics 150 to benefit Farm Aid at 12:30 p.m. Chastain was victorious at the Tricky Triangle last season.

And they wonder why nobody watches the Baby Busch Benefit.

Wow!!! I didn’t know that stealing candy from babies was legal. Nice job kyle. NOT!!!

I was watching the end of that race thinking how it was such a good race behind Kyle Busch; just lame. It’s like letting a senior in Highschool who throws 90MPH and has a wicked curve moonlighting with the 12 year olds in Little League. We are supposed to be impressed when he strikes out 20 batters? Again, Kyle, stick to Cup where your competitors are more adequate and a “W” is more impressive. You look ridiculous down in the truck series accumulating all these wins against little leaguers (no offense to the truck drivers as they continue to grow and develop their skills).

Tom B
Reply to  Misterslideways