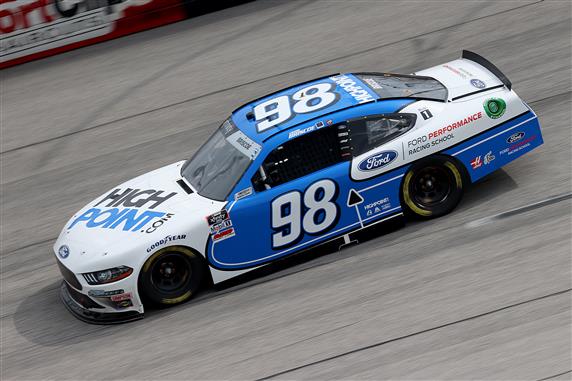 NASCAR announced penalties for Stewart-Haas Racing’s No. 98 NASCAR Xfinity Series team following an issue in Saturday’s (June 13) race at Homestead-Miami Speedway. In the race, Briscoe lost a ballast during the pace laps and had to pit to get it replaced. When he finally joined the race, he was six laps down, but Briscoe rebounded to a seventh-place finish in the Hooters 250.

Because losing ballast on the racetrack is a major safety hazard, NASCAR suspended three crew members. The No. 98 team will be without Crew Chief Richard Boswell, Car Chief Nick Hutchins and Engineer DJ Vanderley for the next four races. The No. 98 team will not lose points or money due to this penalty. The penalty will be in effect beginning at the second Homestead race on Sunday, June 14, and the next race that these crew members can work will be at Kentucky Speedway.

This is the same penalty that Denny Hamlin received in the NASCAR Cup Series following the Coca-Cola 600 earlier this season.

Fortunately for Briscoe, he will get a NASCAR great on top of his pit box in the interim. According to a Reddit post from Briscoe, Greg Zipadelli, who won two championships as Tony Stewart’s crew chief and currently serves as the vice president of competition at SHR, will be the interim crew chief for the No. 98 at Homestead.

The Xfinity Series tackles another 250 miles at the Homestead Sunday at noon ET on FOX Sports 1.

Its no sinder why do many auit watching/ support ing nas car. Its gitten so dochicjen shit! And buas ed!