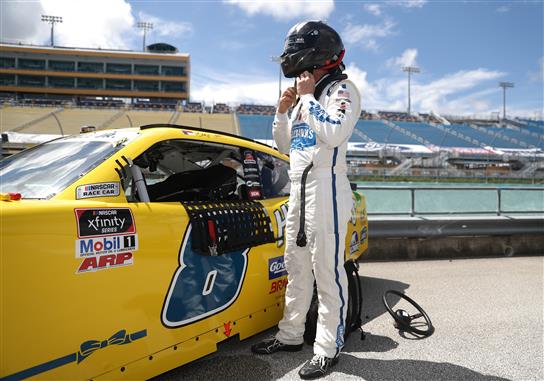 To win a NASCAR race, you have to have everything go right, and sometimes you have to get a little lucky. Luck was not on the side of JR Motorsports on Saturday afternoon (June 13), and it prevented them from having a 1-2 finish in the NASCAR Xfinity Series race at Homestead-Miami Speedway.

Noah Gragson was the dominant car of the day in Saturday’s Hooters 250. He led 83 of the race’s 166 laps and was well on his way to his third victory of the 2020 season. He had a commanding lead over second place, leading JRM teammate and boss Dale Earnhardt Jr. by over 10 seconds at the mile-and-a-half track. It looked like the race was going to end with Gragson in victory lane and Earnhardt finishing runner-up, but that was not in the cards.

With just five laps to go, Ryan Sieg spun to bring out the race’s fifth and final caution, erasing Gragson’s lead. And while the No. 9 car was the best on the long run, short-run speed was a different story. He restarted from the lead on the restart with two laps to go but could not overcome the car’s lack of speed on restarts. He fell to the third position on the final restart, losing the race to winner Harrison Burton.

“We put our eggs in one basket today, to run the top, and it never really fired on restarts, but man we were really good on the long run,” Gragson stated in post-race video he shared on Twitter. “Really thankful for this No. 9 team, and we come back tomorrow with the same amount of confidence, if not more.”

Even though victory was just out of his grasp, it was Gragson’s third consecutive top-three finish, and he leaves the race as the series points leader, leading Chase Briscoe by just 19 points. The top 15 cars in Saturday’s race will be inverted to set the field for the Homestead race on Sunday, June 14, meaning Gragson will start 13th.

As for Gragson’s boss Earnhardt, the late race restart cost him a top-two finish as well. Earnhardt was second when the caution came out but came home in the fifth position. It’s the lone race on the 2020 schedule for Earnhardt, as Daniel Hemric and Jeb Burton will race the No. 8 JRM Chevrolet the rest of the season.

“Hate that we got that late yellow because our cars didn’t fire off very good, you saw it at the end of the race, we couldn’t go,’ Earnhardt said to FOX. “That’s a lot of fun, but this is the elite form of motorsports in my mind, next to Cup. It’s not easy to get out and compete with them boys. They’re so good and race so hard. My time is running out.”

For two-time Xfinity champion, it was his 70th career top-five finish in the series. Hemric will drive the No. 8 Chevy in Sunday’s Contender Boats 250.

Noah Gragson is really fun to watch. He goes for it every lap. I think Rick should consider him for the 48 next year He will be a work in progress but he has the fire and skill that every successful Cup driver needs.
Of course Rick has better credentials for making such a decision than I do my only credential is watching auto racing in general and Nascar in particular for 70 years and I like what I see in Noah