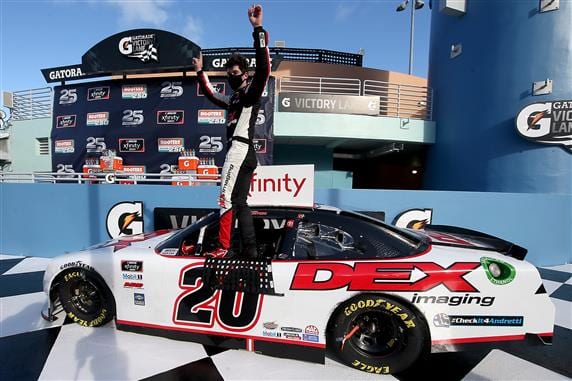 As the laps wound down on Saturday’s (June 13) NASCAR Xfinity Series race at Homestead-Miami Speedway, the victory appeared to be going to Noah Gragson. With under 10 laps to go, the No. 9 Chevrolet led by over 10 seconds. However, that was erased when Ryan Sieg spun with seven laps to go.

After the round of pit stops, Gragson and Harrison Burton restarted on the front row. In a two-lap dash to the finish, Burton snagged the victory, his second career Xfinity win.

RETWEET TO CONGRATULATE @HBurtonRacing ON HIS NASCAR XFINITY WIN AT HOMESTEAD-MIAMI SPEEDWAY! pic.twitter.com/9PYZc6o67A

“I’m so excited. That was awesome,” Burton said in his post-race interview. “I gave away the lead on the first restart in the same position. I didn’t want to do that again. I knew the No. 9 [Gragson] was going to drive it in real deep and slide up. I felt good about that. I’m proud of my guys; we worked so hard on this all day. On every run, we made it better and better.”

The Xfinity Series will race at Homestead-Miami Speedway on Sunday (June 14) for the second Dash 4 Cash event. In addition to celebrating his win, Burton is eager for the second race of the doubleheader.

“This track is so much fun,” Burton added. “It really puts it in the drivers’ hands. I’m just ready to go again tomorrow, to be honest with you. I want to get two!”

Gragson knew he struggled on restarts, but after leading a career-high 83 laps, the third-place finish stung.

“Tough. Our No. 9 Chevrolet was good and our JR Motorsports guys gave fast pit stops all day,” Gragson said. “Restarts were just the biggest struggle. I was really proud of my restarts here last year and now I just couldn’t get them going. I thought we were going to be able to win today running the top, that was so much fun.”

The lap 166 restart bunched up the field and created a three-wide battle for the lead when the white flag flew. All three drivers – Burton, Cindric, and Gragson – raced hard and clean.

The story of the race became Chase Briscoe. After coming to pit road for repairs to his No. 98 Stewart-Haas Racing Ford prior to the initial green flag, Briscoe immediately fell six laps down. He and his team never gave up. He methodically drove a fast race car throughout the race. Remarkably, he finished the race on the lead lap in seventh place.

When the competition caution flew, the field became divided on whether or not to pit. Those drivers who pitted soon gained multiple positions on track thanks to the fresh tires. At the end of the first stage, a few drivers who normally aren’t in contention for stage points earned stage points.

At the top of that list was Sieg who won the stage. Other notables were Alex Labbe in fifth place, Kyle Weatherman in sixth and rookie Joe Graf Jr. in 10th position.

Justin Allgaier is winless this season. Although he sits sixth in the championship standings, he has not displayed comparable speed to Gragson. In the Hooters 250, he was outdriven by his team owner Earnhardt. While Earnhardt is a veteran, he has made only one start in the Xfinity Series in each of the past three seasons. Allgaier managed a 10th-place finish in the second stage, but mechanical problems forced him to pit road. His JR Motorsports pit crew fixed his No. 7 Chevrolet, but he fell to 32nd place finish, 21 laps down.

Tommy Joe Martins has lacked luck this season. The Hooters 250 did not show him any kindness. He dealt with mechanical issues in his No. 44 Martins Motorsports Chevrolet early on in the race. Martins returned to the race and salvaged a 31st-place finish, 19 laps down.

With 2018 NASCAR Gander RV & Outdoors Truck Series champion Brett Moffitt behind the wheel, Our Motorsports has shined in its inaugural season in the Xfinity Series. Likewise, Vinnie Miller has finished inside the top 20 three times this season, definite improvement for him driving the No. 78 BJ McLeod Motorsports Chevrolet. However, on lap 59, Moffitt and Miller both drove into the corner and it didn’t end well for either of them.

Going to be a long night for @TeamBJMcLeod & @OurMotorsports getting these cars put back together for tomorrow's #XfinitySeries race. pic.twitter.com/8ILHA3hvO6

Because of the doubleheader at the track, both teams will have their work cut out for them to prepare for tomorrow’s race.

Briscoe, Gragson, Burton, and Brandon Jones all have won a race this season and likely clinched a playoff berth. After the ninth race of the season, Allgaier, Ross Chastain, Cindric, Justin Haley, Sieg, Riley Herbst, Brandon Brown, and Michael Annett are above the playoff cut line.

After making his lone start of the season, Earnhardt told FOX reporter Regan Smith, “I was so rusty, I was having trouble getting around the No. 10 (Chastain) earlier in the race. That was just because I don’t have enough time to trust where the car is going to end up heading into the corner. He was pretty aggressive, racing me real hard. … It was a lot of fun. I was rusty all the way through. We had it sailing a few times, got some good speed out of the car. We were gaining on the No. 9 [Gragson] and I just kept driving it, no sense in saving anything. I ended up burning it up and he was so good on the long run, I wasn’t going to catch him anyway. Hate that we got that late yellow because our cars didn’t fire off too good. At the end of the race, we couldn’t go.”

Due to the invert, @MyattSnider is slated to have the pole for #XfinitySeries Sunday at @HomesteadMiami in the No. 93. pic.twitter.com/vAYMMavyDn

The Xfinity Series will stay right at Homestead-Miami Speedway for the 2020 Contender Boats 250. The race is scheduled to begin at 12 p.m. ET with TV coverage provided by Fox Sports 1.

The last caution came out to give Jr. a last shot to win.