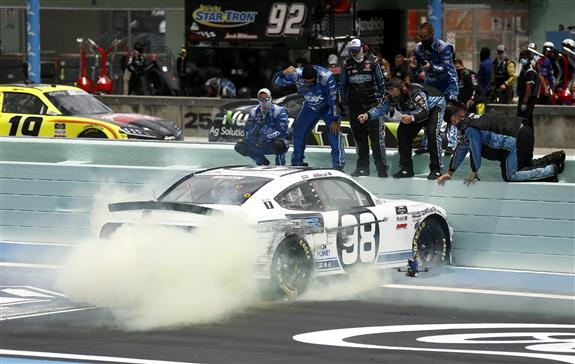 Much can happen in the time it takes a racecar to go from turn four to the start/finish line.

On Sunday afternoon (June 14) at Homestead-Miami Speedway, a spin by Austin Cindric in turn 4 with two laps to go brought out the caution. Noah Gragson, who had dominated the race, wasn’t far from seeing the white flag.

It ended up being just the break that Chase Briscoe, who was running about one-second behind Gragson needed. Briscoe beat Gragson off of pit road and then held the lead on a pair of overtime restarts for his third triumph of the season.

Briscoe got the win without crew chief Richard Boswell, car chief Nick Hutchins, and engineer DJ Vanderly present as they serve four-race suspensions as a result of a ballast coming off on Briscoe’s car in Saturday’s race (June 13) at Homestead. But with NASCAR Cup Series championship crew chief Greg Zippadelli filling in atop the pit box, the late stages once again belonged to Briscoe.

“Today, I don’t know if it was the heat or what. We just weren’t very good. We were decent on the long run, but (Gragson) was definitely better,” Briscoe said. “It’s just a testament to all the guys at Stewart-Haas Racing. We had a good alternate there with Zippy on the box, but Boswell and the guys put a real good tuneup on it.”

For Gragson, it was late-race heartbreak for the second day in a row. Between Saturday and Sunday’s events, he led a combined 164 laps, 81 on Sunday and settled to finish fifth. Starting from the rear of the field due to unapproved adjustments, he led for the first time 68 laps into the race.

The second overtime was forced after a multi-care incident on the backstretch on the first overtime was marred by a multi-car incident triggered by Riley Herbst being tagged from behind by Allmendinger, as the accident that also involved Michael Annett and Daniel Hemric.

For a good part of Sunday’s race, it looked to be a showdown between Gragson and Cindric.  In fact, the two swapped the lead multiple times in a 79-lap stretch that began with the race’s 51st lap, leading all but three laps in that span.

Cindric opted to short pit just past lap 100 after getting into the wall. While the move did eventually get him back to the lead with 34 laps to go, the tire wear compared to the rest of the field didn’t last long as Gragson led with 30 to go. Cindric recovered from his late-race spin to finish 10th.

Ryan Sieg won the first stage for the second day in a row, going on to finish 19th after his team opted to run on scuff tires after the first stage to conserve tires for later in the race.

The caution flag waved six times, overall, twice for on-track incidents. The first involved Tommy Joe Martins and Caesar Bacarella, but both drivers went on to continue on the track after the incident.

The Xfinity Series heads to Talladega Superspeedway next Saturday (June 20) for the second superspeedway race of the season. Tyler Reddick earned the victory at the 2.66-mile track last season.