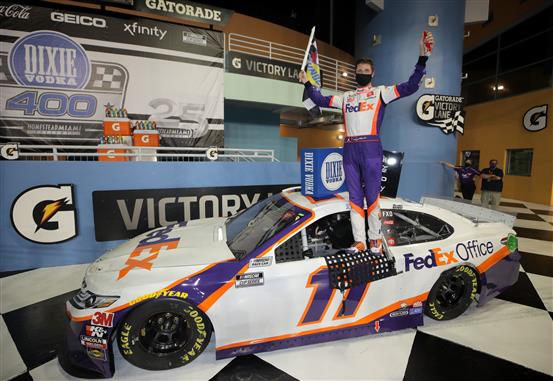 Denny Hamlin had some unfinished NASCAR Cup Series business at Homestead-Miami Speedway. A little over six months after his 2019 championship bid fell short, Hamlin took charge and won from the pole in the 2020 Dixie Vodka 400.

After dominating the first two stages Sunday (June 14), Hamlin closed the deal and earned a maximum 60 points for his effort. He led 138 of 267 laps in becoming the first three-time Cup Series winner this season.

In a race disrupted by a pair of red flags for weather, delaying on-track action for a total of nearly three hours, Hamlin was always a factor up front. But he had to charge back in the final stage to overtake Chase Elliott, falling behind after his final green-flag pit stop.

Hamlin had to track Elliott down from nearly two seconds behind. Then, with both drivers battling lapped traffic, Hamlin used the lapped car of Joey Logano as a pick on lap 238. The No. 22 Ford, trapped on the inside line, seemed to give Elliott a much tougher time despite running two laps off the pace.

Of course, Logano and Elliott made contact while racing for the win two weeks ago at Bristol Motor Speedway. Neither driver won that event and Logano appeared determined to return the favor.

“I need to get through lapped traffic better,” Elliott said after the race. He repeated the statement when asked again later, blowing off an opportunity to inflame tensions further.

“I thought we executed a really nice race and kept it out of the wall almost the whole race,” he added. “We got it there at the end. I’m proud of the effort, we’re bringing fast cars. We’ll just keep putting ourselves in a good position and see what we can do from there.”

That opened the door for Hamlin, who scooted ahead to a 0.895-second win, his first at HMS since 2013. He did so with crew chief Chris Gabehart on the pit box for the first time following a four-race suspension. Gabehart was sidelined after a piece of ballast fell off Hamlin’s car at the Coca-Cola 600.

“The end of these races seems to be Chase’s best suit,” said Hamlin, who started from the pole position. “I knew if I was just patient and ran the pace that I wanted and was comfortable with, we were going to be hard to beat.”

Elliott held off Blaney for third while rookie Tyler Reddick’s strong showing all race long ended with a career-best fourth-place finish. The rookie led twice for three laps, his first laps led in the NASCAR Cup Series. Luckily for him, a late-race mental miscue where he thought the checkered flag flew early didn’t cost him any spots.

Crew had to scream on the radio for him to get going and stay 4th. @RCRracing #NASCAR #DixieVodka400

“We had really good speed early on,” Reddick said. “We used that to our advantage in the early laps to get into the top 10, fine-tune it and make it better to run the fence.”

It was a banner night for Richard Childress Racing. Austin Dillon, whose wife gave birth to the couple’s first child on Sunday, finished seventh to give RCR a pair of top-10 finishes for the first time since 2018.

Pit road strategy set up the fight for the finish between Elliott and Hamlin. With the leaders making green-flag pit stops, Elliott came in a lap before Hamlin. That catapulted him from running 0.7 seconds off the lead to 1.8 in front of Hamlin in first as a result of the pit call.

Simply put, Hamlin had to chase down Elliott for the win, and he did just that. With each driver running their preferred line around the track, the two eventually found themselves in close quarters before Logano helped settle the score with 30 to go. It was Hamlin’s 40th career victory, tying Mark Martin for the most of any modern-era driver without a Cup title.

“I believe the championship is won in one race,” Hamlin said when asked if this year is championship-or-bust. “Last year was a great year. I just want to keep winning.”

It was a clean race with only six caution flags for 27 laps. There was just one DNF (JJ Yeley) and no serious accidents. Lightning caused the biggest problem, resulting in a two-hour delay with only five laps completed. Another 40-minute stoppage disrupted proceedings nearly halfway through stage one.

The poor weather limited the visibility of the first fans returning to the racetrack. Homestead allowed in 1,000 members of the military, a precursor to 5,000 fans allowed in next weekend.

The NASCAR Cup Series returns to action next Sunday at Talladega Superspeedway. The GEICO 500 will run shortly after 3 p.m. ET with TV coverage provided by Fox.