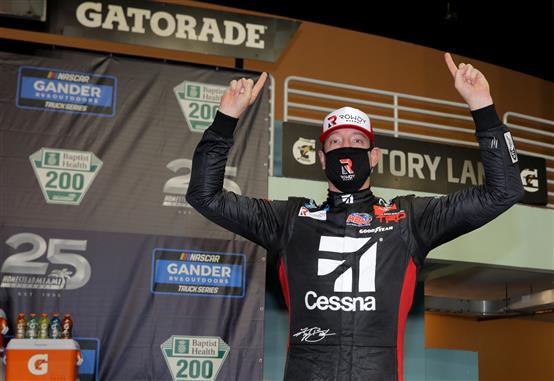 In a Nutshell: Kyle Busch broke an un-Kyle Busch-like winless streak of two races to bring home his 58th career NASCAR Gander RV & Outdoors Truck Series win. Busch, who had to perform a first-lap pass through penalty due to inspection woes, cruised away from Ross Chastain on a late restart to easily cross the finish line first in Saturday’s (June 13) Baptist Health 200 at Homestead-Miami Speedway. Chastain was relegated to third after being passed in the final laps by sophomore driver Tyler Ankrum.

CHECKERED FLAG: @KyleBusch starts in the back and finishes in the front! He wins at @HomesteadMiami!

Chase Elliott crossed the line in the fourth position, while Johnny Sauter was one place back in fifth. Pole sitter Austin Hill wound up seventh.

It Was Really Bad for GMS, But Don’t Tell Ankrum

GMS Racing will have to take quite a large load to the junk pile after a rather embarrassing outing for the five-truck team. Their promising rookie Zane Smith got loose in Turn 4 and collected his teammates Elliott and Brett Moffitt. For Smith and Moffitt, the crash marked a sudden end to their race, as both trucks were damaged beyond race-able condition.

Spinning on the restart! @chaseelliott gets sent around and multiple contenders get collected in the aftermath. pic.twitter.com/XuKQWRhr7V

Smith took responsibility for the accident and told FOX Sports 1 that he “pretty much ran out of talent.” While the teenager looks to rebound at Pocono Raceway, the carnage was not over, as Elliott later skinned the wall on lap 78 but was able to rebound to a hard-earned top-five finish.

However, Sheldon Creed was not immune from the troubles either. Creed awkwardly ended up in the barrels protecting the end of pit wall after making an ill-fated bonsai move to pit road, prompting a red flag that lasted over 15 minutes.

Sheldon Creed slams into the barriers on his entry to pit road pic.twitter.com/y0VdvTl6BY

Ankrum was out of contention throughout the night, but a fresh set of Goodyear tires sent him blasting through the field on the final restart. Ankrum caught and passed Chastain for the runner-up spot but ran out of time to catch the leader. Saturday’s result was still his best since his win at Kentucky Speedway last year, and it left him smiling through his protective face covering when he climbed out of his truck. His No. 26 Chevrolet was the lone GMS entry without a scratch.

“It was really long,” Ankrum said. “We spent most of our time in 15th-to-20th. We short-pitted one time. We just tried to get off cycle with tires, and that didn’t work. We just struggled with the setup all night, but those last two pit stops, we hit something and just threw a spring rubber in the right rear, and we took off from there.”

Where is Stewart Friesen?

After their offseason switch to Toyota, the Halmar Racing bunch and driver Stewart Friesen have frankly disappeared. With two wins and 12 top fives last season, Friesen was one of the top contenders all year long. 2020 has been a completely different story, and Homestead was no different.

The Canadian started back in 19th spot and worked his way up to get some valuable stage points after finishing ninth in the first stage. Friesen briefly popped into the top five and was commended for his efforts by the FSI television broadcasting crew. Unfortunately, he quickly fell back and never presented himself as a factor throughout the remainder of the night.

Friesen ultimately dropped back to 14th when the checkered flag waved, which equals his points ranking, well outside the projected playoff cutline. Although there are several races to go in the regular season to get things turned around for the team, one can’t help but notice that the team only has two top 10s and is running well back from where they were in 2019.

However, not all of the Halmar group’s efforts have been in vain. Halmar’s dirt program, most notably their modified department, has been well up to par with their elite group of dirt racers, including Friesen himself.

With a fusion of dirt and asphalt hitting their tires each week, Eldora Speedway has proven to be the perfect combination for the driver and team, so look for that to be a wildcard if it indeed does get added to the revised 2020 schedule. There still is not promise yet, thus it begs the question, was the switch to Toyota truly the right move?

• He may have scored yet another Truck win, but Busch is still frustrated with problems his Kyle Busch Motorsports team is having. Busch, who ran the same truck in 2019, claimed that a legal part last season was deemed illegal this year, but his crew had not removed it when they showed up to the track. While Busch expects his trucks to run up front, both of his drivers finished eighth of worse, despite glimmers of hope from Christian Eckes. This likely didn’t help.

• After being forced to miss the last two races at Charlotte Motor Speedway and Atlanta Motor Speedway due to a lack of points in relation to the expanded field cap, Long Motorsports, Benning Racing and the third entry for Reaume Brothers Racing were finally all able to hit the track due to a lighter entry list. Although all three entrants finished outside of the top 30, they picked up some much needed income to hopefully continue their seasons.

• Although Ray Ciccarelli might have been more polarizing off the track than on it this week due to his announcement of his forthcoming retirement in wake of NASCAR’s banishment of the Confederate flag, Homestead proved to be a challenge for the Maryland native. After bouncing off the wall, Ciccarelli finished deep in the field, three laps down, in the 29th position.

• After Busch’s win, Grant Enfinger still remains the only driver to have a received any playoff points in 2020. However, Enfinger’s 11 playoff points after five races are more than the entire field received through five events last season. In 2019, just seven playoff points were amassed by three drivers at this same point, but four (and eventually five) straight wins by Busch will do that.

• Troubles continue for the Mike Affarano Racing team, as they were forced to withdraw after failing to pass pre-race inspection. According to the Affarano team, the their truck was barred from competing due to an illegally-installed part. Since a 26th-place effort at Eldora in 2019, the team has had difficulty getting on track despite appearing on entry lists multiple times.

• After weeks of post-race inspection issues across all three national touring series, only one truck was docked by inspectors, albeit minor, thanks to a loose lug nut on Chastain’s Niece Motorsports entry.

P8. Struggled on restarts but the @safelite Tundra rollled on longer runs. Didn’t get the finish we deserved but ? on Pocono.

Bad night just got caught up in dirty air on a restart lost the nose and felt like I just got sucked around and didn’t have a shot at saving it, put myself in a bad position. Sorry to everyone involved. Move onto @PoconoRaceway ??

Austin Hill doubled his points lead now to a 44-point margin, but this time, its to Christian Eckes, who jumped from sixth to second. Like last week, Grant Enfinger still sits tied for third. However, it is with Ben Rhodes instead of Brett Moffitt. Todd Gilliland moves up a whopping five positions to fifth. Zane Smith falls from second to sixth, followed by Johnny Sauter, Moffitt, Sheldon Creed and Tyler Ankrum. Matt Crafton is the first driver on the outside of the playoff bubble looking in.

Tough ending just tried to make the most of some issues and didn’t get the finish we deserved. We had good speed all night though. Thank you @ThorSportRacing @FarmPaint @ChampionPowerEQ @Tim_Dugger @CurbRecords @FordPerformance pic.twitter.com/ciRU9254NR

Bummer ending to what was turning into a pretty decent night, this one tops the charts on stupid mistakes but I’ll learn and move forward, trucks have speed just need to get them driving a bit better, appreciate my guys for working so hard every week!

Another blown tire and another destroyed race car. Not the night we needed ?

Up Next: The truckers will head to Pocono Raceway in two weeks for the Pocono 150 on June 17. Coverage begins at 12:30 p.m. ET on FOX Sports 1; the race can also be heard on your local MRN affiliate or SiriusXM NASCAR Channel 90.