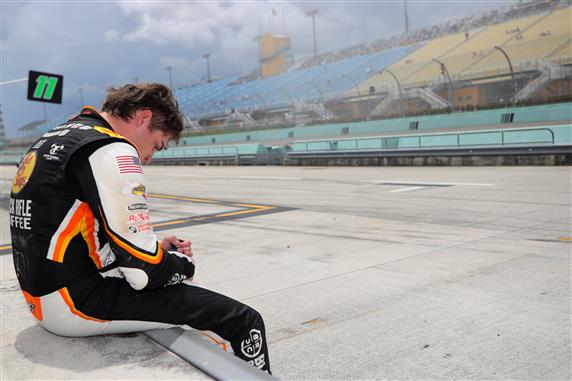 There was a lot of parody that happened between the first Homestead race and the second Homestead for the NASCAR Xfinity Series. Ryan Sieg won stage one in both races. Justin Allgaier had problems getting into the wall late in the race. Noah Gragson was the most dominating car, especially on long runs. Late-race cautions causing the results to change. Yet, the second homestead race on Sunday afternoon (June 14) had 100,000 reasons for being different from the first Homestead race.

After starting last, A.J Allmendinger wins the Dash 4 Cash and $100,000. Noah Gragson was in line to claim the prize but came up one position short in the 5th position of winning the money. Race winner Chase Briscoe will be eligible for the Dash 4 Cash along with Brandon Jones, Ross Chastain and Allmendinger. Briscoe now has the most wins in the Xfinity Series with three.

Chase Briscoe had a rough start to Homestead-Miami weekend but he ended it a winner. Briscoe lost a ballast at the start of the first race and clawed back from six laps down to run a shocking seventh. The No. 98 team wound up having three crew members suspended for four races because of the penalty.

In Sunday’s running of the race, Briscoe was closing in on Noah Gragson during the final stages. Briscoe was only about seven-tenths from the lead before hitting the wall, receiving a gift after Austin Cindric spun after due to a flat tire. Briscoe then held off a late charge from Brandon Jones to take the victory. Greg Zipadelli, who was Briscoe’s interim crew chief, earned his first career win as a crew chief in the NASCAR Xfinity Series.

Honorable Mention: Both Mike Harmon cars finished in the 10th and 11th positions at the end of stage one. Myatt Snider brought the No. 93 RSS Racing in seventh position.

Tires are supposed to be harmless pieces of rubber put on race cars. But when they come off the car? They’re dangerous obstacles to be avoided at all costs. During Sunday’s competition caution, Timmy Hill stopped for four tires but the pit stop wasn’t executed cleanly. A misplaced tire caused the fuel man of the No. 61 to fall down.

Another tire problem plagued Ryan Sieg. Sieg used strategy by pitting under the competition caution. He charged up through the field to take the lead at the end of the stage.

As Sieg was pitting for tires, Allgaier came in and knocked one of those Goodyears out of the tire carrier’s hands. Sieg dropped several positions after the issues and finished two laps down with a disappointing 19th-place result.

A wild moment on pit road as the No. 7 of @J_Allgaier makes contact with a tire being carried by a No. 39 team crew member. ? pic.twitter.com/8t3qpikMuE

Noah Gragson experienced heartbreak for a second straight day. Gragson was in line to win the first Homestead event, but a late caution foiled his plans. The JR Motorsports driver was forced to settle for third despite leading the most laps during the race.

Gragson was in line to redeem himself again on Sunday but had to hold off a hard-charging Briscoe. Once again, another late-race caution bunched up the field and forced a late-race restart. Gragson then lost the lead on the first overtime attempt. That was bad enough.

But it got worst. During the second OT finish, Noah Gragson lost the lead over Dash 4 Cash participant AJ Allmendinger and a chance to compete for another $100,000 at Talladega Superspeedway.

What a costly weekend when you consider Gragson led a total of 164 laps between both races. Even though Gragson finished top five in each event, he has to be disappointed at both the financial cost and multiple missed opportunities to reach victory lane.

“One hundred grand richer, you know what, go to Talladega, and do it again.” -A.J. Allmendinger

The NASCAR Xfinity Series will head further west than it has gone since the COVID-19 pandemic forced a two-month suspension in mid-March. They’ll run at Talladega Superspeedway in Alabama on June 20th at 5:30 p.m. ET. TV coverage will be provided by Fox Sports 1.

Am I the only one who sees that the Dinger created his own opportunity and seized the moment? Good for AJ. Too bad for Noah, again. I was looking forward to his over the top victory celebration.