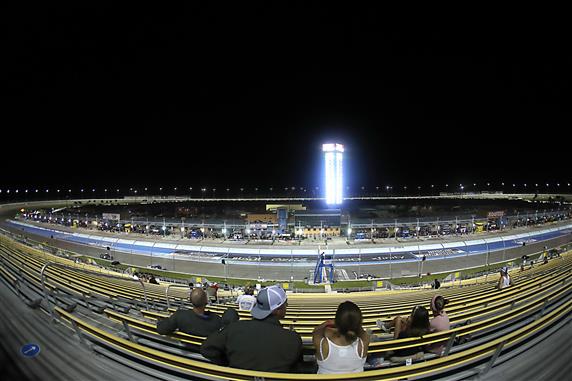 Unfortunately, with the schedule we have for 2020, weather is going to be an issue this season. We have a bunch of daytime races scheduled to be held in the southeast United States in the middle of the summer. Days like we saw Sunday could happen a few more times, but we can’t do much about it. Honestly, NASCAR made moves to get day races away from the Southeast in the middle of the summer starting back in the 1990s to avoid these situations.

The best example of this was the 1996 DieHard 500 at Talladega, where the start of the race was delayed by over three hours due to rain.  That resulted in CBS tape-delaying the race (the last time that has happened in the Cup Series). It ended up airing in slightly highlighted form a week later, the day after the Brickyard 400.

The race was eventually cut short due to darkness with Jeff Gordon winning. In fact, after the infamous crash you see in the YouTube preview above, there were only five more green flag laps before the finish.

With a doubleheader in play, last weekend’s action in Homestead was going to be difficult to begin with. Add in a bunch of lightning and the circumstances weren’t great.

All week, discussion was centered upon the idea that the hot and humid weather in Homestead was going to result in a different type of race compared to the past few years in November. I’d argue not having the race as the final event of the season would be a far bigger change in what you would see than anything else.

The weather Sunday in Homestead was not all that different than some of the warmer times in south Florida for Ford Championship Weekend the past few years. FOX was talking about temperatures being around 86 degrees with a heat index in the mid-90s on Sunday. That’s not unheard of for November there. I’ve been down there the last five years, and some of them it rained every day even though more or less everything got in. There were days with highs around 85 degrees with high humidity. It happens. Then again, days with highs in the 70s don’t typically happen this time of year in Florida.

Ultimately, what happened Sunday was that Jimmy Johnson (the retired football coach/FOX Sports personality with a famously immovable hairstyle) gave the command via video, then it started raining. Shortly afterward, you had a complete halt due to lightning. It stinks, but it is what it is. I was frustrated just like the rest of you probably were.

Problem is, a lot of people didn’t realize that it was a possibility. Yes, I know it’s south Florida. However, not everyone glues themselves to a weather app prior to the race. The Contender Boats 250 for the Xfinity Series ended a little less than an hour before the Cup command, but was run in bright sunshine.

NASCAR RaceHub preceded the race on FOX, and they never really talked about the weather other than to mention that it was hot. In other words, viewers were unprepared for what ultimately happened. To alleviate this, I believe that FOX should update the weather during the pre-race show prior to every race. I don’t know how they should go about it, but they need to update viewers, show the radar and get information from a professional. That doesn’t mean calling on Larry McReynolds. No matter how much of an addiction to The Weather Channel that he has, he’s not a meteorologist. It should be noted that this has only become a problem in the last couple of years. In all seriousness, that kind of stuff shouldn’t surprise people, but it seems to happen way too often these days.

How did FOX spend the various delays Sunday? Well, there were some interviews conducted via Skype. There were also a bunch of reruns. The go-kart race between Gordon and Rob Gronkowski that aired during pre-race before the Daytona 500 re-aired, along with multiple Radioactive pieces. Later on, we got repeats of both NASCAR Presents: Davey Lives On and Empty Cup: Quest for the 1992 NASCAR Championship. As a result, Davey Allison ended up trending briefly on Twitter. I’ve written a little on Allison in the past, and he was in his unnaturally short prime right when I got into NASCAR and started watching races regularly. I don’t know what he would have ultimately accomplished in Cup, but I do know that he was very talented and seemed to be well-liked. Knowing how his 1992 went, I do worry that he was becoming injury-prone like fellow Hueytown native Neil Bonnett was.

Once the race finally resumed under the lights, much of the changes that would have come from running the race in June as opposed to November were gone. You had long runs and tire wear. If anything, you ended up with a more competitive race now that everyone didn’t have to stay out of the way of the championship contenders (which is another rant for another day).

The actual on-track product was decent, but it was very different from the other three races last weekend. That was due to the current aerodynamic rules on intermediate tracks. Would having Xfinity rules in play for this race have resulted in Denny Hamlin getting a massive lead like the one Noah Gragson racked up on Saturday? I don’t know. It would have resulted in a lot more sliding around, though. The additional downforce didn’t even really help teams use additional lanes deep into runs.

Tires were an issue at times during the weekend. All four races saw tire failures of some sort. Erik Jones cut two right-rear tires Sunday night; both came as a result of rubs after hitting the wall. Kevin Harvick also had to make an unscheduled stop. I would have liked to see what the tire wear actually looked like, but we never got a good look. Apparently, these were the same tires that were run at Darlington, but Homestead’s racing surface is older than Darlington’s. It’s often hard to tell what a “good” tire looks like at the end of a run since we never see them. You only really see the exceptionally bad ones. If at all possible, FOX should try to bring viewers those pictures. Maybe it won’t be much of a thing this weekend in Talladega, but it’s something to look at for the future.

The selection of camera shots is not always ideal. One example was a somewhat innocuous battle between Joey Logano and Ryan Preece on lap 42. It was a competitive battle for position. Logano apparently made swooping crossover move on Preece, but viewers couldn’t see it even though the booth referenced it. Why not? The broadcast was on the rear-bumper cam on Logano’s car. We couldn’t see much back there and it was hard to tell what was happening. That’s just one example of an incorrect choice negatively affecting what viewers can see.

Given that the race was running four hours late, post-race coverage was quite brief. Viewers were treated to interviews with three of the top four finishers (race winner Hamlin, Chase Elliott and Tyler Reddick). Speaking of Reddick, he finished fourth despite screwing up the laps at the end of the race.

I had a feeling this wasn’t going to go unnoticed… ? https://t.co/6ZpxeRtWav

Luckily, that didn’t cost Reddick anything other than three to five seconds on third-place finisher Ryan Blaney. As most of us know, there are far worse things that can happen as a result of screwing up the lap count. Marty Reid paid for that with his job back in 2013. Mark Martin scuttled a guaranteed victory in 1994 at Bristol by pulling in early under caution.

Sunday’s broadcast was frustrating as heck because of the weather. What was supposed to be four hours of NASCAR action turned into eight. Must have been quite taxing for anyone that had to work both races. The broadcast brought viewers a decent amount of racing, but it was very front-centric. Luckily, there was decent action up there, with four drivers at even strength for much of the race. Outside of them, you heard about others at times, but not that often. With long green-flag runs, the fact that it was competitive up front really helped FOX’s case. Otherwise, it would have looked like a real dud.

That’s all for this week. Next weekend will bring a tripleheader to Talladega as a makeup for the original weekend scheduled in April that I was scheduled to go to. Saturday is now a doubleheader, with the ARCA Menards Series resuming their schedule, followed by the Xfinity Series. I’m not a fan of the 5:30 p.m. start time, knowing that if anything goes wrong, the race is postponed.

Finally, in front of 5,000 or so people, you’ll have 500 miles Sunday. If you live within 150 miles of the track, there are still a few tickets available for the general public to purchase via the track’s website. This radius should cover most of Alabama and a decent amount of Georgia (including Atlanta), in addition to parts of southern Tennessee.

We will provide critiques of the Cup and Xfinity races from Talladega in next week’s edition of Couch Potato Tuesday here on Frontstretch. The Critic’s Annex in the Frontstretch Newsletter will be split into two editions this weekend. The first column, which is running today, will cover Saturday’s Hooters 250. The regular Thursday edition will cover the Gander RV & Outdoors Truck Series Baptist Health 200 from Saturday night and Sunday afternoon’s Contender Boats 200. In regards to the ARCA race this Saturday, the current plan is to cover that in The Critic’s Annex next week.

Thanks for a column excluding politics

mother nature just is not liking nascar in 2020. just adds to all the craziness of the year.

suppose to be hot and humid this weekend in alabama. hydrate folks.

Everyone keeps saying there is nothing you can do about the weather. As far as it happening, no, but Nascar can do itself a favor and stop scheduling these races to start in the late afternoons. Especially the ones in Florida. Until they decide to change this practice, more races are going to be delayed/postponed unnecessarily. You would think getting the race in at the scheduled time trumps network desires for ratings. Prime time ratings aren’t great either if people are waiting 3 hours for a rain delay?