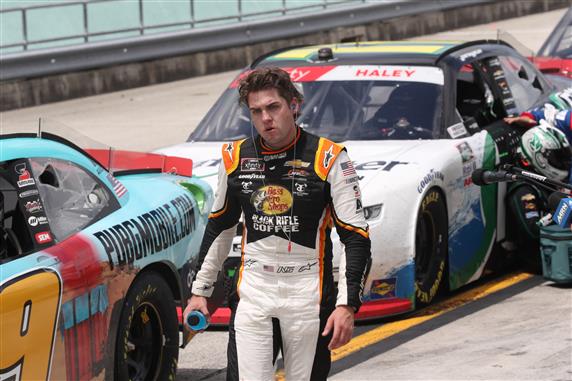 Each season, Homestead-Miami Speedway puts on some of the best racing of any intermediate track on the circuit. The 1.5-mile oval has been the championship finale for a reason; it’s a perfect mix of multiple grooves and tire management.

This week marked the first time in decades the track has been moved from November to summer. But while major titles weren’t decided this time in south Florida, a few drivers still raced with extra motivation this weekend. Ultimately, that led to success on the racetrack.

Have you checked Twitter this week? Self-admittedly, Denny Hamlin entered this weekend’s race at Homestead with extra motivation.

All week, Hamlin and Corey LaJoie were bantering back and forth on Twitter over a number of topics. First, it was about LaJoie’s stamina, following a picture he posted last Sunday following the race at Atlanta Motor Speedway. It turned into a bigger debate of driver vs. equipment, a discussion where Hamlin turned sensitive over some of LaJoie’s comments.

LaJoie then went in depth about the controversy on his Sunday Money podcast (which I highly recommend as a weekly listen). Following the June 10 race at Martinsville Speedway, LaJoie and his co-hosts did a special podcast, discussing more about the topic.

As the chatter continued, shots were fired, including a jab at Hamlin’s botched championship bid last November.

As for his feud with @dennyhamlin, LaJoie said, "He's starting on the pole at Homestead and he's probably going to run good. Because A) it's not the season finale, he's not racing for a championship, so the pressure's not on so he actually might be able to win at Homestead."

You made it about YOU every time. In which case I never mentioned your name or talent level not once. You took it where you took it. To make it about you. You’ve said what you’ve said and even wanted to go back on air to say more. The end result should be no surprise to you.

With both drivers mouthing off, it was time to do the talking on the track. Hamlin, always a pre-race favorite in South Beach, started from the pole for a fourth straight time. His No. 11 was dominant early, sweeping the first two stages. Hamlin then passed Chase Elliott late in the final stage en route to his third victory of the season.

Dating back to the 2019 season opener at Daytona International Speedway — where the No. 11 car won — Hamlin has been victorious nine times in 48 races. In 44 of those, Chris Gabehart was his crew chief. (Gabehart was suspended the four races heading into Sunday’s race after ballast dropped from Hamlin’s car during the pace laps of the Coca-Cola 600).

Quick math: that’s a win percentage of 20.45. No wonder why Hamlin’s feeling so confident.

The Joe Gibbs Racing veteran has always been a successful driver; that can’t be questioned. Hell, he earned his 40th career triumph Sunday, likely to make him a surefire Hall of Famer.

Gabehart, though, is getting the best out of the 15th-year veteran at this point. And the weeklong feud (Lajoie finished a disappointing 29th) only seemed to fuel Hamlin’s fire.

Out of all drivers that have entered any NASCAR-sanctioned event this season, you could argue Noah Gragson is the most improved from last year. Gragson and his No. 9 JR Motorsports team is for real.

Entering the two-race weekend at Homestead-Miami Speedway, Gragson was already having a career year. In the opening eight races, he earned two victories (Daytona and Bristol Motor Speedway), leading more laps than he led all of his rookie season.

But watching Gragson at Homestead was more fun. He was rim-riding against the wall, using the Tyler Reddick line to surge up front. He seemed destined to win both Xfinity races this weekend, leading 83 laps on Saturday and 81 more on Sunday. Unfortunately for him, late cautions came out in each event for two spins. Some poor positioning on late-race restarts resulted in third and fifth-place runs, respectively. To add insult to injury, he was cut short $100,000 as AJ Allmendinger passed him in the final two laps of Sunday’s (June 14) Dash 4 Cash race.

But although Gragson didn’t land in victory lane each day, he’s got momentum. Through 10 races this year, he’s paced the field for 317 laps, a series high.

Harrison Burton keeps on shutting the haters up.

Entering the 2020 NASCAR Xfinity Series season, Burton took over the No. 20 Toyota at Joe Gibbs Racing, left vacant by Christopher Bell when he moved to the Cup Series. Over the past two seasons, Bell piloted the No. 20 to 15 victories and two Championship 4 appearances.

By nature, Burton was set up to fail, self-admittedly underperforming in the Truck Series. Or was he?

Despite a winless Truck season in 2019, Burton competed in nine Xfinity races, preparing him for what was to come in 2020. Scoring five top-10 finishes, the North Carolina native proved he could hang with the top guns. That confidence carried over into his rookie season.

Through 10 races of 2020, Burton has a series-best 4.6 average finish. He’s yet to run outside the top 10, making it the longest streak to start one’s rookie season in series history. Previously, Carl Edwards held the record in 2005 with nine straight.

Made a couple mistakes today that really put us behind, just pushing the limits. Bummer we didn’t have another shot at it today but recovered from a flat RR to 8th #OnToTheNext #SomethingToProve pic.twitter.com/E5bvL2yOnT

Burton also has two victories this season, including Saturday, when he stole a win away from Gragson. He sits third in points and is emerging as a top title contender.

Whenever Kyle Busch enters a NASCAR Gander RV & Outdoors Truck Series race, he’s the favorite. His Kyle Busch Motorsports team is arguably the best active team in the entire series. Add a two-time Cup champion to the driver’s seat and it’s a recipe for unparalleled success.

And success is exactly what Busch has found during his truck tenure.

On Saturday night, Busch competed in his 154th career Truck Series race. And though his No. 51 Toyota had to start at the rear, serving a pass through penalty at the initial start of the race due to a pre-race infraction involving track bar mounts, Rowdy put on a show.

Midway through the second stage, Busch raced to the front. The No. 51 went onto dominate, leading 82 of 134 laps en route to the victory, his second of the season.

What’s that? You don’t like Busch beating on those younger drivers? Well, like the past decade, get used to it. Post-race, the 2019 Cup Series champion made clear he’s not going anywhere anytime soon.

“As long as I’m allowed to race and my name is on the door, you won’t get rid of me,” Busch said. He also hinted at the possibility of running Trucks full-time after his Cup career.