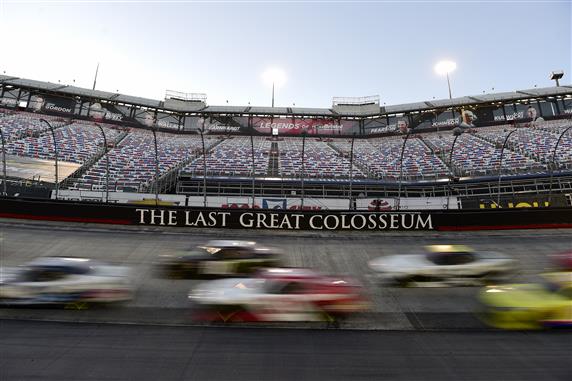 On paper, a June 15 announcement the NASCAR All-Star Race would move to Bristol Motor Speedway next month was due to rising COVID-19 infections. North Carolina has seen a recent spike in cases, making it near impossible a mid-July event staged for the fans could actually wind up with them in attendance.

Bristol, on the other hand, will allow up to 30,000 fans in a deal struck between Speedway Motorsports, Inc. and Tennessee Governor Bill Lee. The way COVID-19’s recovery is unfolding, Thunder Valley’s likely to host the largest crowd in any major sport since mid-March.

But the virus, like in many industries these days, can provide cover for a corporation to make major changes. How many years have fans, critics and drivers been advocating for the All-Star Race to leave Charlotte Motor Speedway? The sport has thrown everything but the kitchen sink at the product there, to no avail. Multiple formats, last-second rule changes and experimental chassis have resulted in only a handful of competitive races at the 1.5-mile oval over the last decade.

The racing at Charlotte has become so untenable in recent years one of its dates was turned (successfully) into the ROVAL infield road course. The millennial fan base NASCAR desperately hopes to attract wasn’t even born during some of the sport’s fantastic All-Star Race finishes at Charlotte: 1987. 1992. 1995.

Compare that to Bristol, already one of the sport’s most exciting tracks and one that put on a hell of a show this month with the revamped short track package. As a quick reminder, here’s the last few laps of the race.

If we see that type of action again? Under the lights, which Bristol has a history of producing even more in its midsummer night race? How in the world could you move a race for the fans back to Charlotte after that?

Teams won’t be happy; an All-Star Race at Charlotte allows them an extra week home with their families. But in the end, proximity means little if you can’t put together an outstanding product. Expect Bristol to put on an outstanding show July 15 … and be in position to host this event come 2021.

The fourth time was the charm for Denny Hamlin at Homestead-Miami Speedway. After drawing the pole for this race, he led 138 of 267 laps and snuck past Chase Elliott late for the win. It was Hamlin’s first there since 2013 despite poles in four straight races there (and five of the last six).

If only Hamlin had that speed last November, right? Winning at the sport’s former season finale racetrack brought up plenty of questions about that missing bullet point on the resume: a Cup Series title. The 2019 Championship 4 was the closest he had come in nearly a decade.

Will this year be his last, best chance?

“I don’t believe that at all,” Hamlin said when asked if 2020 was championship-or-bust. “I think a championship nowadays is won in one race.  It’s not a big picture of your whole season.  Last season was a great season for us.  I would have a season like that every year.  I would take that.

“Almost like any other sport, you just want to win the last game of the season.  We’ll keep going until we win the last one.”

But the goose egg came into greater focus Sunday with Hamlin’s 40th career victory. That tied him with Mark Martin atop the career win list, the infamous bridesmaid with five runner-up finishes in points and no titles.

Looking ahead, there’s only one other driver (Junior Johnson) who’s collected more wins than Hamlin without a season championship. And Johnson, a throwback to the sport’s early days, never ran full time!

It does seem like the Joe Gibbs Racing driver is reaching an inflection point in his age-40 season. Jimmie Johnson is retiring this year; he’ll turn age 45 in September. Hamlin is on the same team with Kyle Busch and Martin Truex Jr., both former champions who could easily be in position to win more. And JGR pseudo teammate Christopher Bell is a year, maybe two, away from superstardom.

Those are just the Toyota drivers expected to be in title contention. Add in Elliott, Ryan Blaney and Logano, all entering their prime. Brad Keselowski and Kurt Busch are former champions in hot pursuit of a second. The playoffs aren’t getting any easier.

All of that does put the pressure on Hamlin in a 2020 season where there may be an opening. Kyle Busch is having an off year, while Truex is dealing with a new crew chief post-Cole Pearn. Meanwhile, Hamlin’s the only three-time winner on the circuit thus far, piling up playoff points for the 2020 Championship 4.

Did I mention that race is at Phoenix Raceway this November? A track where Hamlin is the defending winner? So yeah, the stars look to be lining up. Can the Mark Martin monkey finally come off his back when it counts?

Hamlin owes an assist to old rival Logano for his Homestead win. The way he held Elliott up as a slow car made it clear the duo still has bad blood boiling over from their Bristol battle.

“I just need to get through lapped traffic better,” said the Elliott bot who preprogrammed a repeat answer for the press. The question is whether the 24-year-old is seething in private.

Will he let that conflict go? Then again, you could say the same when it comes to Elliott and Kyle Busch. Busch’s bonehead mistake at Darlington has him all but expecting payback come the fall.

So let’s see. In just the last month or so we have …

You also have old rivalries that haven’t cooled: Keselowski-Kyle Busch and Logano-Hamlin, among others. Add in the crazy schedule this season has provided (more on that in a minute) and tempers are running high in this sport. Stock car racing is built on this type of drama and, after a period of relative peace, it’s nice to have everyone not singing kumbaya on the racetrack every week.

Rookie Tyler Reddick had one hell of a drive Sunday during the 24 Hours Of Homestead Lightning Strikes. Leading the first laps of his Cup career, a fourth-place finish was validation his two championship drives here in the NASCAR Xfinity Series were no flukes.

Reddick, the leader in this year’s Rookie of the Year race, now sits just two points out of a playoff spot. He’s already earned more top-10 finishes in the No. 8 car (three) than previous driver Daniel Hemric did a year ago. The only constructive criticism for the freshman going forward is … learning how to count?

Crew had to scream on the radio for him to get going and stay 4th. @RCRracing #NASCAR #DixieVodka400

The wild ending and strong run overall overshadowed teammate Austin Dillon. On the same day his first child was born, a sleep-deprived Dillon steered his way to seventh on pure adrenaline. It’s clear the new dad has an Ace in the hole going forward, racking up four top-11 finishes in the last five races.

FIVE: Did NASCAR Oversaturate The Market?

Mother Nature has not been kind to NASCAR lately, to put it mildly. Rain delays have hampered nearly half the races since their return from COVID-19 quarantine, turning two-hour telecasts into six-hour marathons.

That said … a soggy Sunday at Homestead brought in just 2.48 million viewers on FOX. It’s less than 40 percent of the audience who tuned in for the sport’s return at Darlington Raceway less than one month ago.

What’s the problem? A Confederate flag ban? #BlackLivesMatter distraction? COVID-19 causing bigger fish to fry? The return of other sports (like golf this weekend) as main competition?

I actually think the answer is none of the above. In just the past month alone, check out the ambitious schedule NASCAR put together:

That’s the equivalent to a race every other day. Remember, many of those were weather-delayed, further eating up time and energy from everyone involved. And while NASCAR’s product has been largely good in 2020, a few of those races were stinkers.

Add it all up and it’s easy to find yourself with a case of stock car fatigue. The midweek races, especially, suffered from a decline in viewership, a warning sign for a sport toying with primetime events in 2021. While the catchup was necessary to get all the racing in this season, NASCAR learned a very valuable lesson by the end of this stretch.

NASCAR is doing itself and the teams a disservice by trying to run all the races.
Better scenario would have been to scrap the playoff this year and run a 28-30 race schedule with a season long champ.
This would have avoided some of the over doing of racing and been a test of what fans have said for years about the playoffs not being good over a full season. Would have been a perfect test this season with a built in valid reason to try it.

The event at Bristol will be a bigger demo derby than Daytona or Talladega. The winner’s car will look worse than Terry Labonte’s at Bristol or Harry Gant’s at Martinsville. Maybe 5 cars finish.