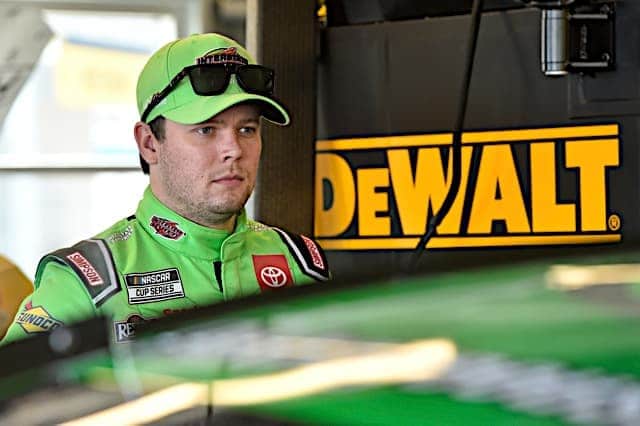 Did You Notice? … Each of the sport’s superteams this season has a driver who’s running behind the curve? 12 races into the year, 2020 has been a year of parity across the sport. Four drivers have already won twice (and Denny Hamlin has won three times). A total of five drivers are tied for the series lead with six top-five finishes.

Up front, seven drivers have led over 300 laps. By comparison, nine drivers in 2019 led over 300 laps the entire season. While Kevin Harvick came out of the box fairly consistent, scoring eight straight top-10 finishes, no one driver has stood out in terms of speed.

But what has become noticeable as we hit the regular season halfway point this weekend is a handful of drivers that are sitting behind the curve this season. Here’s a closer look at some of those who have disappointed with major programs.

Joe Gibbs Racing: Erik Jones. Hamlin and Martin Truex Jr. have won within the last two weeks while Kyle Busch is starting to warm up. But Jones? He’s got three straight runs of 20th or worse and rubbed fenders with teammate/rival Christopher Bell. Remember, these two have never gotten along well, and it feels increasingly inevitable Jones’ spot on the Joe Gibbs Racing ladder is in jeopardy.

Hendrick Motorsports: William Byron. 12 races into the year, Byron has only one more top-10 finish (four) than he does iRacing Pro Invitational Series victories (three). He’s yet to score a top-five result while the rest of HMS has impressed. Both Alex Bowman and Chase Elliott have won, while Jimmie Johnson has a stage victory and looks pretty racy seemingly every week. How much patience will crew chief Chad Knaus have? It feels like Byron has to make the playoffs to avoid major changes at the No. 24.

Stewart-Haas Racing: Cole Custer. Harvick is sitting pretty in the points lead right now for SHR, winning twice and looking like a Championship 4 contender. Both Clint Bowyer and Aric Almirola have had their moments (three top-five results combined). But rookie Custer? He’s got just one top-10 finish and zero since the sport returned from its 10-week COVID-19 hiatus. Sitting behind underfunded John Hunter Nemechek in the rookie standings, Custer has even fallen behind Ryan Newman in points. (Remember, Newman missed three races). Custer won’t lose his job – after all, his father, Joe Custer, is the SHR President – but it’s been a steeper learning curve than expected.

Team Penske: Ryan Blaney. Okay, I’ll wait for you to stop yelling “Crazy!” You done? Last I checked, Blaney’s three wins were a weird Pocono Raceway strategy win with Wood Brothers Racing (2017), the inaugural Charlotte Motor Speedway ROVAL win when the top-two cars wrecked (2018) and a Talladega Superspeedway survivor-style race where he was one of a handful left running (2019). A closer look at Penske shows teammates Joey Logano and Brad Keselowski already have two wins apiece. Stop and think … with all the parity this year, do you seriously consider Blaney a title contender? When will he start closing the deal on these races?

Chip Ganassi Racing: Matt Kenseth. A top-10 finish in Kenseth’s first race back since November 2018 raised hope he’d be the perfect fit replacing Kyle Larson on short notice. Instead? He’s had just one lead-lap finish in the seven races since that debut. It’s been a mess, frankly, magnified by a 25th-place debacle at Homestead-Miami Speedway this past weekend. Kenseth was running a car that’s a perennial contender to win at that track; it’s also a place he had a top-10 finish his last time out (2018) with Roush Fenway Racing. Kurt Busch is happy to have his old teammate back, but I’m beginning to wonder if Ross Chastain was the better option here.

JTG Daugherty Racing: Ryan Preece. JTG is a middle-class outfit, but Preece has simply struggled to run with the backmarkers. He’s one of just two drivers inside the top 30 in points without a top-10 finish (Michael McDowell is the other). Three DNFs in the first six races didn’t help things, but it feels like the speed just isn’t there. Teammate Ricky Stenhouse Jr., by comparison, already has two top-five finishes in Preece’s old car.

One clear exception, by the way, has been Richard Childress Racing, as I wrote about yesterday. Cup rookie Tyler Reddick has raised Austin Dillon’s game and brought that two-car outfit up to speed.

Did You Notice? … Three excellent Hall of Fame choices were made Tuesday (June 16) with Dale Earnhardt Jr., Red Farmer and Mike Stefanik. Don’t look for drama to get stirred up here; I honestly have no problem with any of them.

Earnhardt, the sport’s perennial Most Popular Driver and a two-time Daytona 500 winner, was going to make it in. You can debate his qualifications (no titles) but why bother? The NBC analyst has a successful second career in the sport and is set to be an influencer, both on the TV and ownership side, for decades to come.

Stefanik was also an easy choice. A seven-time Modified Tour champion, he also won two Busch North (now ARCA Menards Series East titles) and racked up 86 career NASCAR victories. Killed in a plane crash last September at age 61, sentimentality may have worked its way into voting. But that’s no reason to argue the selection.

Red Farmer, an original member of the Alabama Gang, was named one of the NASCAR’s 50 Greatest Drivers in 1998. Many fans might know him for being the other injured driver in the helicopter during Davey Allison’s fatal crash in 1993 … but Farmer was so much more. Three consecutive Late Model Sportsman championships from 1969-71 (think: precursor to the NASCAR Xfinity Series) were paired with hundreds of wins on short tracks throughout the southeast.

All five of the Pioneer Ballot nominees (pre-1961) were worthy candidates. But Farmer was someone I felt would have entered the Hall years ago. And Ralph Seagraves? The executive who brought R.J. Reynolds into the NASCAR world and created the Winston Cup Series for 30+ years? It’s hard to argue with his Landmark Award selection.

I was more interested in the voting for those who didn’t make the cut. The first two drivers who fell short were Ricky Rudd and Neil Bonnett, increasing the likelihood they’ll make it next year. Further back in the voting? Drivers like Harry Gant and Carl Edwards.

Edwards, in particular, I’d argue had a better career than Rudd or Bonnett. He had more wins (28 vs. 23 vs. 18). He had two runner-up finishes in the championship chase; the Rudd-Bonnett duo combined for just one. Even if you discount Edwards’ Xfinity title, the stamina in double-dipping (and winning) was a skill set not on the others’ resumes.

And Gant? He’s in a class of his own by producing four straight wins in September 1991 at age 51. An 18-time Cup winner, he also was runner-up in the championship chase (1984) and had a successful Xfinity Series side career (21 wins).

I feel like those two drivers should have the edge come next year. But we’ll see what the voters think. A fan had a very interesting take on the Edwards situation, considering the way he’s disappeared into the Missouri cornfields after his surprising retirement in January 2017.

Tom, do you think being an ambassador for this sport counts? Because I don’t think Carl’s post NASCAR career has been as an ambassador. Not saying it should matter, but wondering if that was a consideration in him not being selected.

.@NASCAR is considering moving numbers to the rear quarter panel of the car for next month's All-Star Race, as a first-time experiment for the Cup Series, per sources.

➖ NASCAR's K&N Series started experimenting with this in 2017 to see if it gives sponsors better branding. pic.twitter.com/Icu2YGfCmp

That said … I think it’s a whole bunch of drama over nothing. Just because NASCAR experiments with something in an exhibition doesn’t mean it automatically becomes a rule! The late John Andretti drove a Lincoln to race in the All-Star Open in the late 1990s, and that never made it onto the racetrack.

My guess is these numbers are going to be really hard to read on the TV broadcast. Part of it is being blocked by the fuel cell! And since TV drives the audience these days (see: empty stands), I think a permanent decision will be made the second people complain they can’t figure out what car it is.

But hey, it’s worth a shot right? It’s an exhibition. Anything goes.

Actually half the weight of an entire race because bubba’s father is white.