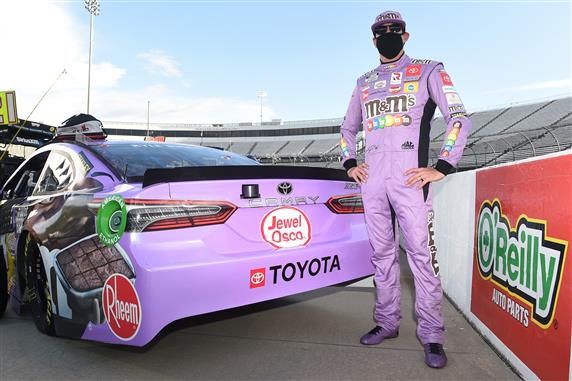 NASCAR has been in the news for all the right reasons the last week or so, and with it, comes a discussion about what the leaders of the sport have done. Of course the changes they have made are positive, but leadership is one thing many have questioned over the years. NASCAR President Steve Phelps was the man who put these changes in place, which leads to a debate of what it takes to lead the sport and is he the right man in charge after doing something so drastic as this.

What would be the optimal qualities of the leader of the sport? Is Phelps the man who can keep turning things around? What would you like to see change, other than the package or anything on track?

We are now one-third of the way through the 2020 season in the NASCAR Cup Series and several big name drivers have not won a race yet, one of those being defending champion Kyle Busch. To the surprise of many, he has had a down year to date and has not shown the speed that we have been used to seeing for so long now. He is bound to turn it around very soon, but it is far from his best start.

What could be wrong with the No. 18 team? Will he break through soon or will this be a yearlong struggle? Are there signs that he can win two to three races in a row like he has in the past after slow starts?

Q: If you had to pick the perfect leader for the sport of NASCAR, what qualities do you want out of them? Is Steve Phelps what we need, and is he the right person in charge? -Tony R., Atlanta, GA

A: First off, in no way am I going to voice any bad opinion on the leaders of NASCAR currently. Everyone does all they can every week to make sure we all have a race to watch and try and give the sport the best success it can get.

During these tough times, NASCAR leadership has done a fine job of putting together these races to make up for what was lost due to COVID-19, and they have made sure to do it as safely as possible too. Safety has come first with this sport, and in more ways than one, they have done a great job of improving on that this year.

Phelps has gained my respect at least, especially after his comments about the injustice issues and the ban of the Confederate flag. Has he been the right guy, and does he lead the sport in the right direction? I think it may be too early to tell, and we will have to see what he truly can do a few more years down the road.

My ideal leader in NASCAR would be someone who has an immense amount of respect from the drivers and even has a relationship with them. One who can relate to what drivers feel every week in every circumstance is huge when it comes to leading the sport. This is why having a past driver could also be beneficial. Ben Kennedy, great-grandson of NASCAR founder Bill France Sr., is currently a part of NASCAR’s leadership, and having been a past driver, he seems to understand what they want. He has done an excellent job with the Gander RV & Outdoors Truck Series the past several seasons, and that series continues to get healthier.

Honesty with the fans and good communication with them are two other huge factors you have to look for in leaders of an organization. If a leader cannot talk to the fans and listen to them and what they have to say, that leader is not what we need. Next to money, fans drive this sport. If you are not going to hear them out, it is not going to be a good time.

Currently, there are a lot of controversial topics leadership has had to deal with the last few weeks. There has been so much positivity within the sport that it is incredible to see it all unfold. However, there has been some negativity recently surrounding Phelps and Executive Vice President and Chief Racing Development Officer Steve O’Donnell. As the season goes on, we will see who steps up more, and eventually, even if you are not pleased with the people in charge now, it will be the way we all want it to be. Having faith and trust are important, and to get through these ailing times, those will help.

Q: Which driver has been the biggest surprise so far, good or bad? Jim G., Palmyra, PA

A: I can think of a few drivers that come to mind. However, and this is going to not be popular with some people, but if we talk about surprises in the Cup Series, I am going with Kyle Busch. While Busch has been solid in his Truck and NASCAR Xfinity Series starts, his Cup season has been far from ideal.

Let’s face it, if you had Busch not winning a single Cup race by the time we were one-third into the season, you would have been labeled as insane. Here we are though through 12 of 36 races, and Busch does not have a win. For the defending champion, this is extremely unlike him. What could be the reason for the down year?

Busch is a champion and will go down as a top-five driver in NASCAR history when all is said and done, but this season, his team just lacks that speed they need to find victory lane. While he has been in contention to win races like the Darlington Raceway night race and Atlanta Motor Speedway, he has not found the extra step needed to win.

He will get a win before the season ends, there is no doubt. If you think a champion like Busch does not score a win driving for Joe Gibbs Racing, it is a little crazy. Is it impossible? With the way 2020 has gone, it actually is not. Busch has had these slow starts in the past though.

Look back to 2017 when he finished runner-up in the championship race to Martin Truex Jr. Even though he ended the season with five wins, they all came in the second half of the season. His first win came in race No. 21 at Pocono Raceway. There’s no need to panic for the No. 18 team, but it is a little strange at the same time how far off the team has seemed to be.

They always say you cannot keep the best drivers down for long, and this is no different with Busch. I’m sure once we get into the summer months of July and August, we will forget about his slow start and he will reel off three-to-four wins. It may be a stretch to think this now, but that is just how good he is. For now though, he is my biggest surprise of the season. That will change in time, but a lot of people will have their eyes on him to see if and when he will visit victory lane again in Cup.

my biggest surprise is the rookie class.

I think many race fans felt that under Brian France’s direction NASCAR was foundering, having lost its way and flailing around trying to find some new magic formula. It think that under the current leadership group things seem to be on a better footing. While, if I were in charge, I would have made some different decisions, NASCAR has put together a workable package of rules and procedures for these current exceptional times. I agree with you that Steve Phelps deserves credit and that Ben Kennedy (as a member of the family and one with genuine race driving experience) seems to be a good influence already — as was/is his mother. But let’s not forget Jim France who has taken on the top role in the organization. I credit him with the calmer, more-reasoned approach to things. Not only does NASCAR seem more grounded now but remember that this year WEC, ACO and IMSA seem to have found a workable set of ‘convergence rules’ which make the future of all three sports cars series brighter. Jim France has to have been a major factor in making this convergence of rules possible.