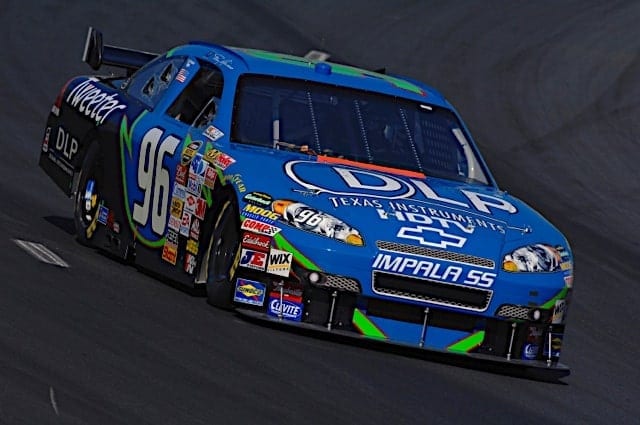 Joe Gibbs was a successful coach in the NFL and currently owns one of the most successful teams in NASCAR. Between the NFL and NASCAR Cup Series, Gibbs has won eight championships, and he’s in both Hall of Fames. It’s hard enough to be a one-sport talent, but two is even rarer.

Deion Sanders was successful in both baseball and football, while Michael Jordan was successful in basketball but not in baseball. Sometimes being on the NFL field does not translate to success to the pavement. We’re going to look back at five times an NFL coach or player was involved in NASCAR and failed to make an impact.

Joe Washington’s team is the definition of how not to run a team in NASCAR.

Washington won a Super Bowl ring in 1983 and wanted to start a NASCAR team. He started in 1998 with sponsorship from Dr. Pepper and had Jimmy Foster pilot the car. By the end of the season, 13 different drivers tried to pilot the No. 50 car, including Jeff Green, Mike Wallace and Stanton Barrett.

Fortunately, things improved in 1999 with Mark Green behind the wheel as the only driver. He failed to qualify for just two races and finished 21st in points.

Washington went a step back in 2000 by having Tony Roper behind the wheel. Roper didn’t qualify for three of the first 12 races. At Charlotte Motor Speedway, Roper practiced the car and had Barrett qualify the car. The No. 50 failed to make the show again for the 10th time that season. Dr. Pepper withdrew sponsorship from the team and Washington had to shut the team down due to the lack of sponsorship. Dr. Pepper went to Team Carroll Racing in 2001, and Roper was tragically killed in October 2000, due to a crash in the Gander RV & Outdoors Truck Series race at Texas Motor Speedway.

Mike Cofer was a kicker for the San Francisco 49ers during two of its Super Bowl wins. He played football for seven seasons before jumping into a stock car.

Cofer joined the Southwest Series full time in 1994. Running for JMC Enterprises, Cofer won a race at Stockton 99 Speedway, leading flag-to-flag. He finished ahead of future Hall of Famer Ron Hornaday in the standings and won Rookie of the Year.

After a decent 1994 campaign, Cofer’s career did not amount to much. He ran two races in the No. 04 and one race in the No. 5 for Rick Ware Racing in the Truck Series, with a best finish of 21st at Phoenix Raceway. He hasn’t raced since, and to add insult to injury, he had his two Super Bowl rings stolen in 2013.

Marino was winding down his Hall of Fame career with the Miami Dolphins when he started marketing with FirstPlus Financial with Team Cheever in the Indy Racing League. Marino wanted to dabble into NASCAR by helping fund Bill Elliott for a second team in 1998. With funding from FirstPlus, driver Jerry Nadeau was slated to run for Rookie of the Year with the team.

The No. 13 sported the familiar colors of teal and orange, representing the colors of the Miami Dolphins, where Marino spent his entire NFL career. The results didn’t come for Nadeau. His best finish in the No. 13 was a 21st at Pocono Raceway, failing to qualify for two events. He had food poisoning before qualifying for the spring race at Dover International Speedway and had Dennis Setzer qualify the car but the car, again, failed to qualify.

Nadeau was released before the second Pocono Raceway race. After, the No. 13 featured drivers like Wally Dallenbach Jr., Tom Hubert, Ted Musgrave and Setzer. Musgrave scored the only top 15 for the team at Phoenix Raceway with a fifth-place finish.

Jerry Glanville was trying to emulate Joe Gibbs, but on the driving front. Glanville ran some Xfinity Series races while he was the head coach of the Atlanta Falcons. After 1993, Glanville focused on his racing career with his team.

After 1999, Glanville decided to compete in additional ARCA races, but with a limited schedule. During this time, Glanville earned his best-career finish of fourth at both Michigan International Speedway and Nashville Superspeedway in 2002.

In the 2001 ARCA race at Michigan, Glanville enlisted the help of Jeff Hammond to be a tire changer on the car. Even though he could drive a car well in his equipment, he did not have much luck finding a sponsor.

While qualifying for an ARCA race in 2003 at Kentucky Speedway, Glanville suffered a hard crash and had the car engulfed in flames. Glanville withdrew the car and spent the night in the hospital.

Glanville would make one more start in ARCA in the No. 8 car at Michigan in 2004. After his racing career, he took various coaching jobs in football. Going back to his roots in 2020, Glanville was the defensive coordinator for the Tampa Bay Vipers in the XFL.

The Money Racing team is not the first phantom team run by a sports legend. In 2003, two Hall of Fame Dallas Cowboys quarterbacks, Troy Aikman and Roger Staubach, planed to become owners of a NASCAR team in 2004.

It started with rumors that they would be sponsored by RadioShack, Acme Brick or Pizza Hut. Hall of Fame Racing signed driver Alex Whitman after finishing sixth in his first career ARCA race in 2003. Whitman would only make one more start in ARCA after signing with Hall of Fame Racing. Whitman has not been heard of in the racing world since.

Hall of Fame Racing had a sponsor that wanted to sign in 2005, but was prohibited by NASCAR because it conflicted with Nextel. The team finally found sponsorship with Texas Instruments DLP in the fall of 2005.

The team was looking for a driver, as there were rumors that Paul Tracy, David Starr, Bobby Labonte, Mike Wallace or Ward Burton would pilot the car. Finally, HOF Racing announced that Terry Labonte would drive the first five races of the season and the two road course races. Tony Raines would pilot the other races.

It started rocky, as the team received a penalty in its first race, which was the 2006 Daytona 500. After a disappointing 2006, 2007 wasn’t much better. Raines finished 28th in the standings. Hall of Fame Racing only recorded two top-five and four top-10 finishes. By September 2007, Aikman and Staubach sold their stake to Arizona Diamondbacks Executive Jeff Moorad.

“Hall of Fame had a sponsor that wanted to sign in 2005, but was prohibited by NASCAR because it conflicted with Nextel. The team finally found sponsorship with Texas Instruments DLP in the fall of 2005.”

This is part of the NASCAR decline which isn’t discussed very much. I don’t remember the HoF Racing situation but do remember the theatrics involving the #29 and #31 RCR cars with Pennzoil/Shell and AT&T respectively in 2007/2008. Team sponsors that wanted to be a part of the sport were shut out by NASCAR title sponsors or segment official sponsors like Sunoco.