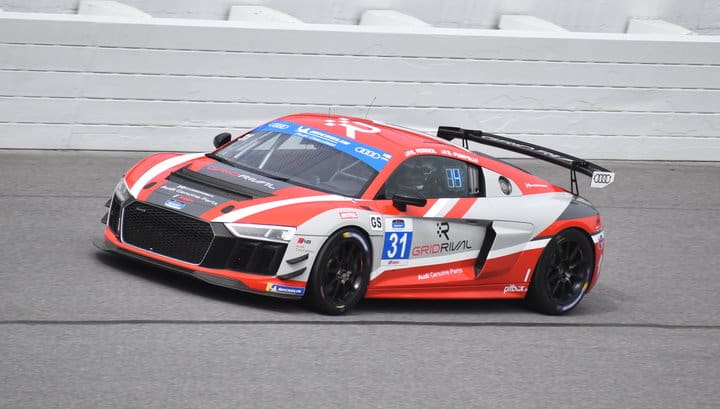 Hardpoint Motorsports, a team that currently competes full-time in IMSA Michelin Pilot Challenge (Note: Pilot Challenge car pictured above) announced Wednesday (June 17) that the team will expand their program to the IMSA WeatherTech SportsCar Championship, effective immediately.  The team has acquired an Audi R8 LMS GT3 and will compete using No. 30 in the WeatherTech Sprint Cup races in the GT Daytona class starting with the WeatherTech 240 at Daytona on July 4.  Team owner Rob Ferriol and Spencer Pumpelly, who also drive together in IMSA Michelin Pilot Challenge, will continue together as teammates.  The Pilot Challenge effort is unaffected, meaning that Ferriol and Pumpelly will be doing double-duty for much of the remainder of the season.

“The WeatherTech Championship has been a stretch goal of ours since we started Team Hardpoint late last year,” Ferriol stated in a press release.  “We initially eyed 2021 to make the jump into GTD, but as with most things in racing, timing is everything. The temporary pause in the 2020 season, while difficult, has allowed us to continue refining our team, but also put us in a position to react when the door opened to expanding our partnership with Audi. We have a lot to learn, but I’m excited to be able to move into yet another car with Spencer as co-driver, continue growing our relationship with Audi, and see our team rise to the challenge. It’s a challenge that we’ve thought a lot about and are all looking forward to.”

For Pumpelly, the announcement means that he is now full-time in the GT Daytona class and can conceivably race for the overall GT Daytona championship.  In addition to his Hardpoint Motorsports responsibilities, Pumpelly is part of GRT Magnus’ team during the Michelin Endurance Cup events alongside Andy Lally and John Potter.  He will be racing two different cars in the Audi and GRT Magnus’ Lamborghini Huracan, but they are both powered by similar V10 engines.

“I’m pleased to be headed back to the Weathertech Championship full time for the first time since 2016 and even more excited to be doing it with Hardpoint and Audi,” Pumpelly said.  “The GTD class features some of the toughest racing anywhere but with the Hardpoint team behind us we will have great cars and all the tools at hand to get Rob acclimated to the series.”

In addition to racing professionally for more than 20 years, Pumpelly is Ferriol’s personal driving coach, serving in that role since 2016.  That year, Pumpelly raced full-time for Change Racing in their Lamborghini alongside Corey Lewis.  The duo finished ninth in GT Daytona points with a pair of fifth-place finishes at Canadian Tire Motorsport Park and VIRginia International Raceway as their best finishes.

For Ferriol, Daytona will mark his IMSA WeatherTech SportsCar Championship debut.  However, he did race with Pumpelly in an Audi R8 LMS GT3 at the FIA Motorsport Games last November at the ACI Vallelunga Circuit in Italy, representing the United States.  The duo managed finishes of 15th and 21st in the preliminaries before finishing eighth in the Main Race.

Ferriol and Pumpelly have made four starts together in IMSA Michelin Pilot Challenge.  Three of those were in 2019 for Moorespeed and this year’s season opener at Daytona for Hardpoint Motorsports (all four starts were in the same chassis).  The duo had fourth-place finishes at WeatherTech Raceway Laguna Seca and Michelin Raceway Road Atlanta to end the 2019 season.  The 2020 season started with a ninth-place finish at Daytona.

Hardpoint’s announcement means that this will be the second new Audi team to enter the GT Daytona class since the season started.  Rick Ware Racing has also acquired an Audi and planned to race it starting at Long Beach before the race was cancelled due to the COVID-19 pandemic.