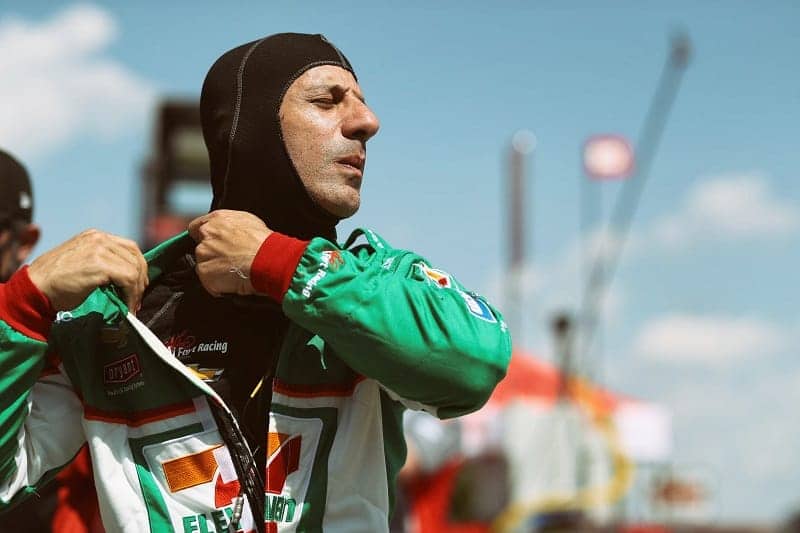 Tony Kanaan before practice at the 2020 Genesys 300. (Photo Credit: Chris Owens/Courtesy of IndyCar.)

Tony Kanaan is one of the most well-known and loved NTT IndyCar Series drivers, but he’s finally hanging up his helmet. The 2020 IndyCar season is Kanaan’s final campaign and he is only running a partial season. But there’d be no better sendoff for the Indy 500 champion than to nab a last win or two on his way out. How competitive will Kanaan be in an already hectic season?

No wins. Third place at Gateway and three other top-10 results.

Kanaan announced before the start of the 2020 IndyCar season that this would be his last season in IndyCar. It’s also the first time that he hasn’t run a full season since 2002; he’ll be splitting seat time in the No. 14 entry with Sebastien Bourdais and rookie Dalton Kellett.

Tony Kanaan is to IndyCar what Cal Ripken Jr. was to Major League Baseball. He’s consistently started every race for over a decade, and he’s still in incredible physical shape, too (he is an avid triathlete). Even though he’s decided to call it quits, his combination of experience and talent makes him an immediate contender at every event.

Kanaan showed that in this month’s first race at Texas Motor Speedway, where he finished 10th. If anyone can get the most out of the AJ Foyt Racing cars, he can – and the remaining races on his schedule are all at tracks where he got top-10 results in 2019. His schedule may be limited, but it’s set up to his advantage.

It’s no secret that the Foyt entries haven’t been as competitive as the team would like going into the 2020 IndyCar season. Kanaan’s podium at Gateway was the team’s only podium finish since Takuma Sato finished second in the Dual in Detroit Race 2 in 2015. They haven’t won since Sato at Long Beach in 2013. As great of a driver as Kanaan is, if he doesn’t have a competitive car, there’s only so much that he can do.

Tony himself will be looking for his first win since Fontana in 2014 (although he’s had four runner-up results since then). While he’s only going to be in the car for select races, those races only have about a month separating them (his next races are July 17-18 at Iowa, then Aug. 23 and 30 at Indianapolis and Gateway) so hopefully the relatively short breaks won’t have any impact on his season.

Since Tony Kanaan isn’t running a full season, he’s not going to rack up enough points to be competitive for his second IndyCar championship. However, he should still be a force to be reckoned with, even though he’s only in a handful of races. He will land at least one podium and a win is a possibility if he gets a dialed-in car.

And while his streak of consecutive starts will come to an end next month when he doesn’t start the GMR Grand Prix, that’s a number that is going to stand for a very long time.