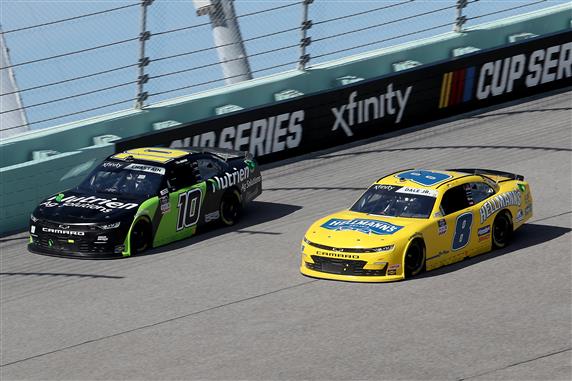 This past weekend saw a lot of great racing from Homestead-Miami Speedway, including Saturday’s NASCAR Xfinity Series race. That event had a little extra flavor to it as Dale Earnhardt Jr, the sport’s 15-time most popular driver, was making his lone NASCAR Xfinity Series start of the season.

Earnhardt owns JR Motorsports, a four-car operation in the series. One of the reasons he continues to race in the series, despite announcing his retirement following the 2017 season, is because of a sponsorship obligation. Hellman’s agreed to a deal to sign on as sponsor with the organization as long as Earnhardt Jr. drove at least one race in a car sponsored by them. So, you can say he is taking one for the team.

Even though he only runs once a year, his performance at Homestead-Miami Speedway was very impressive. He finished fifth but was a top-five car for most of the day and was running in second when the final caution came out. Without being in a race car for six months and despite having no practice or qualifying laps, he still was able to be competitive.

That got us thinking: Should that be the last race Dale Earnhardt Jr. ever runs? Joy Tomlinson and Clayton Caldwell debate whether or not Saturday’s (June 13) Hooters 250 should be the final start for new Hall of Fame inductee Dale Earnhardt Jr.

Why Not Keep Going?

Dale Earnhardt Jr. should keep racing in the Xfinity Series. Why not? He’s only racing once a year, and he’s driving in the famed No. 8 car, which is also currently piloted by part-timers Daniel Hemric and Jeb Burton.

This number is very special to Earnhardt and his family. The number was used by his grandfather Ralph for the majority of his career, and it was the same number he used when he broke into the Cup Series. He had many memorable wins in that car, none more so than the July race Daytona International Raceway in 2001 after his father passed away just a few months earlier. Who can forget the moment he slid in the grass after the race and stood up on top of his car with his hands raised? All the crew members came out for the celebration, and even teammate Michael Waltrip joined in on the celebration. It was a special victory that will always be remembered.

In all, Dale Earnhardt Jr. had a lot of success in the No. 8, winning 17 Cup races, including five times at Talladega Superspeedway and the 2004 Daytona 500. He can continue competing in the No. 8 car once a year and continue that legacy, even if it’s still a bit dangerous due to his history of concussions.

Another benefit to him continuing his career is he can choose to race at whatever track he wishes. Last season he honored his dad with a throwback car at Darlington Raceway and ran well in the process. This year, he chose to run at Homestead, and although it was run much later than anticipated, he still excelled and earned another fifth-place finish. So why stop now? He could race when and wherever he wants to. This week on the Dale Jr. Download, he hinted that he’s looking at Martinsville Speedway for possibly his race next season.

On the Dale Jr. Download, new #NASCAR Hall of Famer @DaleJr said he wants to do one more @XfinityRacing race.

"I'm going to keep a really good eye on the @MartinsvilleSwy race… If that race looks fun to me… that would probably be the race I'd like to try next year."

Earnhardt won there in 2014, and although he competes for fun, it’s in every driver’s nature to try to win. He’ll have a good chance to win it next year, as right now the driver talent is somewhat murky. Chase Briscoe might compete in the Cup Series in 2021, and while there’s a crop of gifted young drivers, it’s still anyone’s game. Martinsville is also a track that favors experience, and he’ll have more than anybody in the field. What better way to show why he’s a Hall of Fame member than capture another grandfather clock?

Although I’m sure he is satisfied with his run last Saturday, he’s still a racer at heart and will hopefully do one more race at the paperclip next year. Even if he doesn’t win, or if he encounters problems, he’s still in the Hall of Fame, and he’s had a great career. Fans have a bunch of memories to hold on to rather than his last race. They just want to see him out on the track competing.

There’s no doubt his career has a had a lot of brilliance on the track, but what matters more is what he’s done and continues to do off the track. He’s known for his Twitter presence, philanthropy, and his family. He’s a successful Xfinity Series team owner and is a great broadcaster. He’s one of NASCAR’s most popular drivers ever. Racing in one-offs are just icing on the cake. There’s no reason he should stop. – Joy Tomlinson

He Should Ride off Into the Sunset

Dale Earnhardt Jr.’s run at Homestead-Miami Speedway was impressive. The last time he was in a car was in September 2019 when he finished fifth at Darlington. I remember that day clearly. Earnhardt ran in the top 10 all day long and had a strong car. Darlington is one of the toughest tracks on the circuit and, while it started off a little slow for him, he ended up with a good day.

Last Saturday’s race was a little different. From the drop of the green flag, Earnhardt Jr. was impressive. There was no part of the race where he looked rusty. He consistently moved through the field and ran in the top five all day. He wasn’t the best car on Saturday, but he was close to it. The fact that he had no laps in the car prior to the race on Saturday made a lot of people wonder if he was going to be competitive. He quickly put those worries to rest.

He should have finished in the second spot, if not for a late-race caution flag that created a restart where anything can happen. Even though he finished fifth it felt a lot better than that. The car he drove hasn’t won a race since it was the No. 88 car and Earnhardt won in 2016 at Richmond. It had been almost four years since that car had seen victory lane and you can argue it was the closest that team has come to a win since that day.

Not only did he give the No. 8 car its most impressive performance all year long, but he did it without being a car in nine months and without having a single lap on the track prior to the race. Daniel Hemric finished second at Charlotte earlier in the year, but even he wasn’t as impressive in that run as Earnhardt was at Homestead-Miami Speedway on Saturday.

I can’t think of a better way for him to cap off his career. His wife Amy is pregnant again with his second child, so he is going to be extra busy come next year. I know he mentioned he’d like to run Martinsville in 2021, but that is a track that he hasn’t run at since 2017. By the time next year comes around it’ll be almost four years since he turned a lap there.

His next layoff will be about 16 months between races. That adds another seven months to the layoff he had this season. Plus, it’s looking more and more like practice and qualifying may be a thing of the past. He would have to find extra magic at Martinsville to have as impressive as a run as he had at Homestead.

Plus, JR Motorsports is at the top of their game right now. They have speed in their cars on a weekly basis. That is not always the case and may not be the case come Martinsville next year. You can’t guarantee the ride is going to be as competitive as it was at Homestead. Is it really worth it for him to go out to Martinsville and be uncompetitive? What would be the point of that?

The last thing that Junior Nation wants to remember from their driver is him going out and not being competitive. The lasting memory of his last race should be one he performed exceptionally well in.

Eventually a career has to come to an end. It’s unfortunate but as the old saying goes, “father time is never defeated.” 2021 will be the start of a new decade of stock car racing and while Earnhardt will only be 47 years old in November of 2021, there is not a better way for him to go out than the impressive showing he displayed on Saturday at Homestead-Miami a week before his Hall of Fame induction. You can’t get much better than that. – Clayton Caldwell

i’m sure jr’s wife will have something to say and sway any decision of racing part time or fulltime.

also, all it takes is another wreck to cause a concussion.

Wah…wahhhh. Jr should still be racing, period. Dale Sr wasn’t swayed by kids, broken sternums or his concussion he had before Darlington in 1997. It’s all this: drivers are not paid what they used to be paid, hence NASCAR no longer releasing money/earnings #’s. He makes more money sitting around.

If Junior wants to run in 1 race a year, why not? It certainly keeps him up to date on what the current cars are like to drive so he can comment with more knowledge. If it keeps his sponsor happy and his family is OK with it, why not? I’m sure that, when he feels he can’t be competitive any longer he will bow out.

Before the car changes, he’ll race one more. Then, all the old guys drop out – Jimmie, Junior, (ahem) Kenseth. Old guys should want nothing to do with the NextGen car (even though it looks good), that’s how all the great ones have gone out.

Hey, what’s the point of owning a team if you can’t drive if you want to. As long as he wants to and isn’t a danger to anyone else, why not?
It’s good to be king.

Junior just stay retired stay out of the cars and look after your wife and daughter and what ever the child is going to be .you carried the Earnhardt name proud