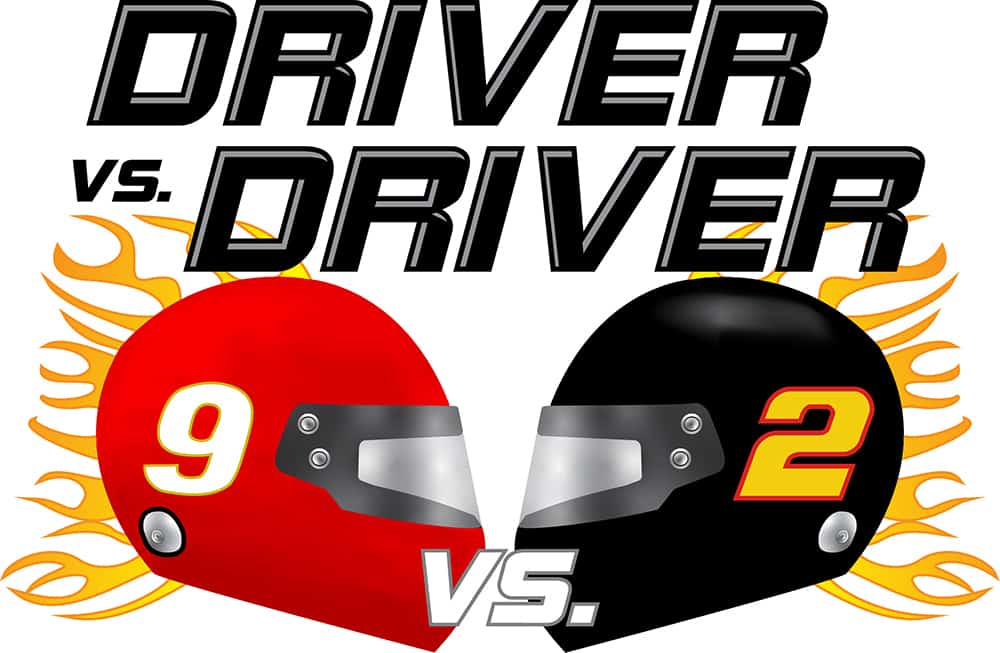 With 99 wins and two titles between them, Bill Elliott and Rusty Wallace tore up the track in the late 1980s. For 25 years, they raced one another, and while Wallace has an edge in the win department, well, they didn’t call Elliott Million Dollar Bill for nothing.

This month, we look closer at the drivers who have had their names called to be inducted into NASCAR’s Hall of Fame. From the early days through the playoff era, these drivers have been selected among the best ever in the sport. Here, there really are no winners; that’s up to the ages to decide. But there sure are some great conversations about the best of the best.

Wallace and Elliott first encountered each other on track in 1980, and the rivalry lasted until Wallace’s retirement after the  2005. 50 of Wallace’s 55 wins and 43 of Elliott’s 44 came with the other in the field. The runner-up in Elliott’s 1988 title year was none other than Wallace, at a margin of just a few on-track positions.

Which of these two fiery redheads was better?  Here’s the debate.

Good ol’ “Awesum Beeeeell, from Dawwwsooonville” has long been one of NASCAR’s fan favorites. Elliott won 16 career Most Popular Driver awards, in fact, in his 37 active NASCAR racing seasons. The crowd went wild for the southern gentleman.

But popularity alone doesn’t make him a better driver than Wallace. Elliott was fast. He established the qualifying records for both Daytona International Speedway (210.364 mph) and Talladega Superspeedway (212.809 mph) during the 1987 Cup Series season. By the end of his career, he had a total of 55 poles under his belt. Elliott showed that he could drive the wheels off the racecar.

Granted, “Rubberhead” Wallace did have 55 wins vs. Elliotts’s 44, but it was the caliber of wins that Elliott had that makes him the winner here. Wallace made 23 attempts to win the Daytona 500 and the best finishing position that he managed to salvage was a measly third place. Elliott won the Great American Race twice.

What makes these drivers unique is that they were stark opposites. Where Wallace tore up the short-track races such as Martinsville Speedway, Elliott dominated the bigger racetracks. Most seasons Elliott’s skill set proved more beneficial because there were many more longer tracks than short tracks in the Cup Series.

The pinnacle of Elliott’s career came with his 1988 Cup championship, one year before Wallace’s title in 1989. Haha, Elliott got there first!

Second only to the championship, the ultimate marquee event was the Winston Million, at least during the time that Elliott and Wallace drove. This bonus gave the driver an extra $1 million in their pockets if they could win three of four daunting races: the Daytona 500 (the sport’s richest race), the Winston 500 (the fastest), Coca-Cola 600 (the longest) and the Southern 500 (the oldest). Elliott won the inaugural season of the challenge in 1985, winning the Daytona 500 and capping off the feat in the Southern 500, but the Winston 500 made him a legend.  After losing two laps to fix a broken oil fitting, Elliott made them both up under the green flag to come back and win. No driver has come close to a feat like that since.

Million Dollar Bill, as he became known, held the title of the only driver to win the Winston Million for more than a decade until Jeff Gordon took it in its final year (1997). For that accomplishment, Elliott landed himself on the cover of Sports Illustrated as the first Cup driver to ever grace the cover, both things Wallace was never able to achieve.

While Wallace continued his long-standing partnership with Team Penske and Robin Pemberton, Elliott was entering the next phase in his career in 2001 with Evernham Motorsports. This move allowed Elliott to become the flagship driver for the team and ushered Dodge into the sport. Usually, new teams find take a long time to get established before they find their first win, but Elliott got his first win with his new team in the first year. That’s impressive and says much about the talent at that No. 9 camp.

By 2003, Elliott found his groove and enjoyed four more wins, 20 top fives and 35 top 10s, while Wallace did not win any races during that stretch. Instead, he scored just nine top fives and 29 top 10s as he floundered in the late stages of his career. Elliott won on all accounts during the final years of his career.

Wallace’s tenure in the sport lasted 26 years and ended in 2005, while Elliott’s spanned 37 years when he retired from full-time action in 2003. He continued as a research and development racer for the next nine seasons for Evernham Motorsports, continuing even after his full-time career was completed to instill his talents into the next generation of racers. His strong family heritage in the sport probably prompted his eagerness to continue the racing tradition, something that has carried over to his son Chase, who currently races in the Cup Series.

Elliott was proud that he did not get handouts or special treatment. The Elliott family worked hard to get where it was and made it big. Elliott’s story is unique in the fact that it really was a family affair and each member had an important role to play in the team’s success. His longtime crew chief and engine builder was none other than his brother, Ernie Elliott. The Elliotts put all their blood, sweat and tears into their team, and the success that came out was the direct result of their passionate drive to win.

When it comes to NASCAR, it’s all about speed and prestige in a driver’s career. Elliott managed both while also leaving an indelible mark on the next generation of drivers. –Erin Campbell

The debate between Bill Elliott and Rusty Wallace is a debate between white hat and black hat. At the end of the 1989 All-Star Race, Wallace and Darrell Waltrip were battling for the win. Wallace spun Waltrip with only a couple laps to go. Wallace went on to win the race.

After the incident, Waltrip became a good guy in NASCAR, collecting back-to-back Most Popular Driver awards in 1989-90, the only other driver beside Bill Elliott from 1984 to 2000 to win that award. That May 21 day, meanwhile, made Wallace the new villain with fans.

But popularity does not define the career; on-track performance does.

At the beginning of his career, Wallace did not make a lot of noise but had a great debut. He drove the Penske No. 16 car at Atlanta Motor Speedway in 1980 and finished second to none other than to Dale Earnhardt. But after that debut, Wallace only scored 16 top 10s in his first six seasons, a rough start.

But he broke through in the 1986 season. Tim Richmond left Blue Max Racing, which was owned by Raymond Beadle, for Hendrick Motorsports, leaving the Blue Max seat open for Wallace. Wallace signed a contract that kept him in the car until 1990.  That first season, Wallace scored his first two wins of his career at Bristol and Martinsville.

Wallace left Blue Max after 1990; tensions were high even during the group’s championship season in 1989. Wallace left with Miller sponsorship to Penske, and that move benefited him even more.

Pre-1990, Elliott might have been a better driver, but Penske let Rusty Wallace be Rusty Wallace. Wallace trailed in major stats of wins, top fives and top 10s, but he was within two positions on average starting and finishing positions behind Elliott during this time, on the edge of greatness.

After an inconsistent start to 1993, Wallace put up a run for the ages. In the last 10 races of the season, he had an average finish of 4.1, while Earnhardt had a 9.6. Earnhardt secured the 1993 championship by 80 points. Even though the 1993 championship slipped away from Wallace, he was consistently up front and overcame injuries suffered in a wild wreck at Talladega to do so.

Wallace competed week in and week out for wins and championships. From 1986-2002, he was in the top 10 in season points all but once. In fact, he was in the top 10 in points 17 times, more seasons than Elliott was, with 14 times. Wallace scored a win in 16 consecutive seasons, a record ties him with Jimmie Johnson and Ricky Rudd for third all time behind Richard Petty and David Pearson.

Elliott had 10 great seasons, but Wallace was a threat later on his career, while Elliott fizzled out to help out teams use his past champion provisional.

Wallace, on the other hand, was competing for the championship from the start. Before the playoffs started in 2005, Wallace had seven top fives, 14 top 10s and was third in points. He was even second in points seven points behind Johnson after the second playoffs race at Dover International Speedway. Unfortunately,  the last eight races were not good for him, and a second title was not in the cards.

At the end of their careers, Wallace beat Elliott in most major statistical categories while competing in 122 fewer starts.

There may be some missing trophies, like the Daytona 500, missing from his shelf. But Wallace won three or more times at eight different tracks, including his his nine wins at Bristol Motor Speedway. Wallace’s racing career made him a lock for the Hall of Fame class of 2013 before Elliott in 2015.

Wallace’s car number might have been No. 2 but he raced for the No. 1 spot far more than Elliott. ~Jared Haas

I’d go with Elliott because he won the “Big Ones,” the benchmark for greatness in any sport. Especially in individual sports like tennis and golf, we look at Grand Slams won before any other statistical trivia. Nobody cares how many Hanes Underwear 500’s a guy has, but Daytona 500’s, Brickyards and Southern 500’s elevate a driver to superstar status.

With Bill Elliott one must also remember that he went winless for 8 seasons (or so) while he attempted the owner/driver trick. If Elliott had stayed in competitive equipment for his entire career, his top 10, top 5, and win totals would be much different. After many had written Elliott off as no longer competitive, he came back and won several more races with Evernham – something few drivers have done after such a long winless streak and so late in a career. Elliott also started his Cup career by driving for a family team several years before Melling got involved. It took Elliott 5 years to win his first race, but after Melling and sponsor Coors came on board, wins began to pile up quickly. This brings up another impressive aspect of Elliott’s career, that being the number of wins he achieved from 1985 through 1992.