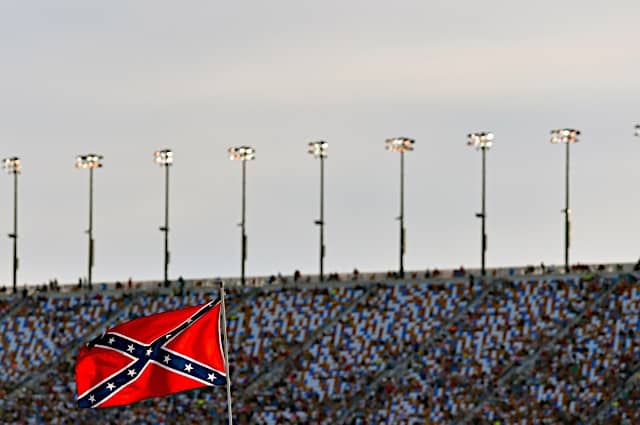 Wednesday, June 10, NASCAR made national news when it banned the Confederate flag from all of its racetracks. The rebel flag had been somewhat a staple of the early years of the organization, but NASCAR made the move to become more welcoming and inclusive.

The move was mostly met with positive reviews, and the impact was immediate, as many athletes from other sports began to show their support for NASCAR.

However, almost immediately after the rebel flag ban was announced, I saw more than a few people posting on social media to say that what NASCAR needed to do next was cancel the pre-race prayer.

If a person’s immediate thought after getting rid of the rebel flag is to get rid of a prayer and they are comparing those two items in the same sentence, they need to check their scale that measures the levels of offensiveness. Because the rebel flag should be considered way more offensive than a prayer for the safety of the drivers and teams.

But while the pre-race prayer isn’t in immediate danger, there are people that feel alienated by it. I was raised Southern Baptist, so I like the prayer. It is for my demographic and added one more thing that allowed me to connect with NASCAR more than other sports leagues. Praying is an important thing to do before drivers go risk their lives at 200 mph, and it was a key component for Ryan Newman‘s survival this past February at Daytona International Speedway. Newman himself chalked that up to a miracle.

However, I understand the prayer isn’t super inclusive for people of other religions coming to races and that it isn’t good business or ethics to alienate a large chunk of your crowd. Cancel culture eventually comes for everything sooner or later. To quote Corey LaJoie, I wish cancel culture would cancel itself. But eventually, cancel culture will come for the pre-race prayer.

It should not be canceled, though. It should be expanded.

And any ruling on the prayer shouldn’t be in the hands of the fans in the stands or watching on TV. It shouldn’t be made by the media, NASCAR or even the teams. The call should be made by the drivers, because after all, they’re the ones who risk their lives each week. And if I was about to go risk my life for something, then I would want the right to choose whatever type of prayer I want to hear to comfort and protect me.

The 40 drivers should request what religions’ prayers they want before each race. If it turns out to be four different religions requested, then there’s four different prayers before the race. That’s probably not going to happen anytime soon. But hopefully as NASCAR gets more diverse, this could come into play more and there’d be a Jewish, Muslim, Hindu, etc., prayer before or after the Christian prayer whenever drivers from those religions show up. Think of it as being similar to the Olympics where the differing national anthems of the three athletes on the podium play during the medal ceremony.

Seeing this type of unity among religions before the race would create more tolerance among NASCAR fans from different backgrounds. And for the non-religious types, what harm does it do you to have someone else pray good things over you? I’m not Hindu and don’t believe in their gods, but I’ve been to a Hindu temple a few times and gladly accepted the blessings they wished upon me. I viewed it as them showing their care for me.

The prayer portion of the pre-race might take a little longer then, but it doesn’t necessarily have to be shown on TV. Prior to 2001, the drivers were already in their cars when TV coverage started. Yet longtime fans refer to that time as the good old days despite no prayer for them to see on TV.

And yes, with extended prayer time, the fans not interested in the prayers will likely be bored and feel like its a waste of time. But again, it’ll go a long way toward religious tolerance. Besides, what super important thing are the fans that want the prayer gone going to do with that minute or two that they will save by not having the prayer? Are a bunch of drunk race fans going to cure cancer with all that extra free time? If you take away the prayer, then that’s just more time the racetrack will blare the same eight MRN or PRN soundbites on the P.A. system over and over again, as loudly as possible. People should be more offended by that than any prayer.

So, cancel culture, you did your job last week. Now get away from NASCAR. And NASCAR, if you want the prayer to be more inclusive then add to it, don’t subtract. Otherwise, you’ll piss off a lot of fans with a lot more reason to be angry than a bunch of racists.

Here’s what I’ve been thinking ever since I went to my first race in 1976: your God is not my God. Get rid of this useless tradition.

So you were offended when being offended wasn’t cool. Somebody somewhere is jealous.

Go sit in your potties during the prayers because they ARE part of our lives!

While not a praying sort myself, I have no problem with a prayer before a race where a life could be lost. It the prayers were a little less of a sermon and just asking for all to be safe it might be easier to listen.

what’s next the anthem?

man i’m so over all this.

As the song goes “You ain’t seen nothin yet”

Exactly Janice. It’s not like it costs anyone anything, and while some might find it pointless, there is no harm coming to them as a result.
Not only the anthem but it won’t be long until they come for George Washington and Thomas Jefferson and demonize them. Watch out.
Here’s the deal. You can’t apply today’s standards back through time and history. People do what the times dictate. They were considered good law abiding citizens and scholars in their time.
There are still a lot of people in slavery situations around the world, maybe they should be protesting to end slavery on a global level in the present and future instead of just whining about the past. Waste of energy, you can’t change the past.

Bill W
Reply to  Bill B

Bill B ,they have already toppled a statue of Washington and Jefferson in Oregon. Next they will burn down Monticello and pull the statues of Jefferson at UVA.

Bill W – I read about that at lunchtime today.

Tell everyone again how last weeks viewership was less than 41% of the Darlington race.

I’ve got an idea. Instead of coming up with all these doomsday scenarios while nothing has happened yet or is even rumored, why don’t we enjoy the races?

What these corporate idiot types and others DON’T get! APPEASEMENT never happens, ever! The goal posts are always in motion and you cave once, you a ripe sucker for the next shake down wave!

Courage is in short supply these days.

Wowed by the lack of street smarts and common sense with so many people and “Corporations”. Simpletons and sheep! Shameful, and shocking!

Who gives a damn who’s alienated by things someone is alientated in a crowd by anything that would be done. Im sick of the damn whiny crybabies in this country. People need to start being adults and stop with the crybaby sensitivity.

Well I just watched ARCA and Xfinity and saw neither the prayer nor the national anthem. If they don’t show up on Sunday I’m boxing my nascar junk (aka merchandise) and shipping it back to them where they can stuff it. They are gnawing on my last little bit of patience. I gave up on the Confederate flag but this is a bridge too far!

I learned to live without cigarettes, five years now. I learned to without football, three years now. Pretty sure I could learn to say whizz off NASCAR since we’ve already been somewhat weaned off.