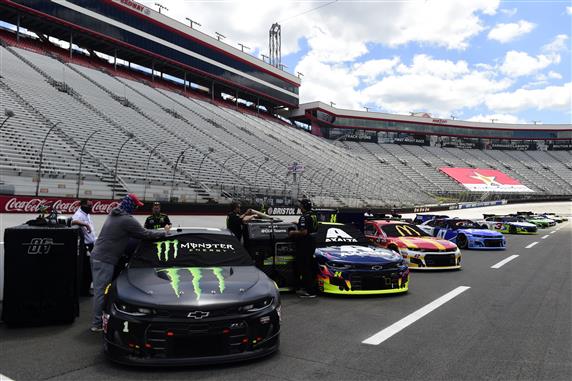 1. Is shifting the All-Star Race to Bristol Motor Speedway the best possible move for the event?

Erin Campbell: NASCAR should have skipped the All-Star Race this year, but since the show must go on, even though Bristol is awesome for racing, it could have chosen better. Eldora Speedway should have been considered; its races are awesome to watch, and though it is in Ohio when many shops are based in North Carolina, since the All-Star Race is mainly supposed to be for the fans, so this would be a great race to watch. You can bring back the old-school vibe of dirt racing and put on a good show since the drivers are racing for money and bragging rights.

Adam Cheek: Absolutely. While I am in the boat that believes the event should’ve been skipped altogether in 2020, moving it to Bristol is a great decision; despite Charlotte Motor Speedway’s proximity and being worried about limiting the spread of the virus, Bristol makes for a fantastic venue for an under-the-lights showdown between the sport’s biggest stars. It’ll be a huge draw for however many fans are allowed at the track and for TV viewers as well.

Vito Pugliese: Without question. The All-Star Race has endured as long as it has in Charlotte simply for convenience’s sake, as it allowed the exhibition weekend while keeping teams at home for a week with their family and friends. The downside has been races (with the exception of the All-Star Open) that have been a bit underwhelming and fell a bit short of some of the more memorable All-Star Race moments. Given the current package of high downforce and low horsepower, it has become another lack-luster 1.5-mile track and will remain as such until the package more closely mirrors the Xfinity Series balance. Bristol is more aligned with facilitating the kind of fender-crumpling action and lack of regard for body integrity that led to some iconic All-Star moments. We’ve done Charlotte for almost 35 years, it’s time for a change of scenery.

Christian Koelle: I am concerned about the future of NASCAR at Charlotte this year. With the governor of North Carolina laying down the law on motorsports in the state, most recently Ace Speedway, I am concerned about the playoff race later this year, should this pandemic continues the way it has. We’ll get to a point where fans will either be allowed or the event won’t happen. The fans have been asking for Bristol for years, so they get what they want.

2. Should NASCAR allow teams to practice with the new aero package at Talladega Superspeedway?

Campbell: Teams shouldn’t be able to practice with the new rules package. I am glad that NASCAR has made things consistent. Yes, superspeedways are different, but the no-practice rule allows smaller teams a chance and evens the playing field some.

Pugliese: Given the current constraints, I understand why NASCAR is holding off on having a practice, and what that would entail in the garage area, but this is a bit of a safety issue itself with the speeds and propensity for 25-car wrecks. Allowing teams an hour of practice, even if just before the race would be worth entertaining. This is a race that many have circled on their calendar and is the first with significant fan attendance. As big as the track and the grounds are, it shouldn’t be too difficult to keep everyone spaced accordingly. It’s time we start working back toward a normal weekend cadence with some practice, particularly with new packages at tracks pushing 200 mph.

Cheek: Yes; the new aero package needs at least a little bit of testing. 15 minutes, half an hour or so shouldn’t take up too much time Sunday morning for the teams to get their feet wet. Besides, we don’t want to see the field crashing out seven laps into the race when they get three- and four-wide going into the third turn. Brendan Gaughan doesn’t want to see that either.

Koelle: I’m concerned both ways. Cars have flipped in practice at Talladega Superspeedway and then the sport turns around and makes things right. It’s a bad move not to have practice, though. I would like to see a practice because NASCAR made a ton of changes and the notebook is empty for majority of the teams, if not all of them.

3. Due to rescheduled events and weather delays, NASCAR has raced on nearly every day of the week since returning to the track. Have the midweek races have been effective?

Koelle: If NFL returns in the fall, NASCAR has a good chance to test it out this season if it plans it just right. It has been effective and kept NASCAR on top of the boards in social media interaction. I  enjoy the mid-week racing because it makes my week feel like it goes by faster. Otherwise, it’ll go back to normal because ratings haven’t been great. But attendance will triumph ratings in the long run, because NASCAR can be like NFL and MLB and offer cheaper options during the week.

Pugliese: Absolutely; what else are you going to watch? Over the past few weeks, the midweek races have started to take on a bit of a summer baseball vibe. It’s nice to flip on the TV and see cars racing, fans in the stands or not. If this is an avenue NASCAR wants to pursue, that’s fine, but it needs to do so judiciously and not fall victim to the over-saturation and visual waterboarding of NASCAR four out of seven days a week. If anything, it shows the viability of loading up on some summer races and maybe loosening some weeks that the series is totally off throughout the year.

Cheek: Yes. Considering NASCAR is still the only major sport going on, it’s a huge draw, especially due to the fact that many people continue to work from home and/or aren’t doing anything at night anyway; there’s bound to be a good portion of TV viewers who see a live event of any kind and flip to it. Racing nearly every day of the week? Count me in.

Campbell: Midweek racing has opened the eyes of NASCAR to see that its possible to have shorter races on a weekday, but this won’t become a habit in the immediate future. The short turnaround time is hard on the teams, drivers and all involved. This could lead to some exhibition type of races, maybe put on by sponsors for fun if the drivers are able to come.  That could be good for ratings and sponsorship mid-week.

Pugliese: It points to some organizational and structural issues within Kyle Busch Motorsports on the Truck side. Everyone remembers when Kyle Busch was insinuating that his drivers needed to win in his trucks or they’d likely be out of the sport. While NASCAR is a what-have-you-done-for-me-lately sport – unless you bring a sponsor or cash to buy a seat – it’s also about finding the right fit between driver and team. Harrison Burton looks to be in a great spot at Joe Gibbs Racing and looks to build upon his early success in the not too distant future.

Koelle: There are drivers who just click in trucks and there are others who don’t. There are others who click in Xfinity and others who don’t. Burton is one of the latter. I’d like to see what Todd Gilliland would do in an Xfinity car. Burton is the real deal, but we’re running out of places to put these guys. Leavine Family Racing can probably add a car and Gaunt Brothers Racing could use more JGR support, and boom, you’ve got competitive drivers in competitive cars with more Toyotas.

Campbell: Burton’s success in the Xfinity Series is a complete tribute to the Big Mo. When you have it, everything goes your way; when you don’t, nothing does. Burton is the real deal, he just has found his grove when it comes to the crew chief, car, team and competition. There are plenty of Cup drivers who do not find success in the lower divisions. Burton is here to stay; he has come from strong racing genes and is just getting started. Look for Burton to take the spotlight in the Cup Series in the next few seasons.

Cheek: I’m not entirely sure, but I’ll chalk it up to just being uncomfortable in the trucks themselves. Maybe the car body suits him better, maybe it was the competition, maybe it was the team. I’ll go with the first one I listed. Burton is the real deal in Xfinity and is a serious threat to win the championship. He’s outrunning Austin Cindric, Ross Chastain and at times Chase Briscoe, all guys who I thought would be the Big 3 this season. Burton and Briscoe are the two to watch out for this year.

Heck yes it was a great idea. When you’re talking about a race that’s all about the money, a boring old cookie-cutter isn’t the first thing that comes to mind…you want an ACTION TRACK!! Like Bristol or Martinsville. Hope it never goes back to Clean Air Speedway, I mean Charlotte Motor Speedway.

At Dega, Harrison Burton’s momentum took a big hit, though the accident wasn’t his fault. How his team bounces back will go a long way in determining whether he’s a title favorite or just a driver having a hot streak.