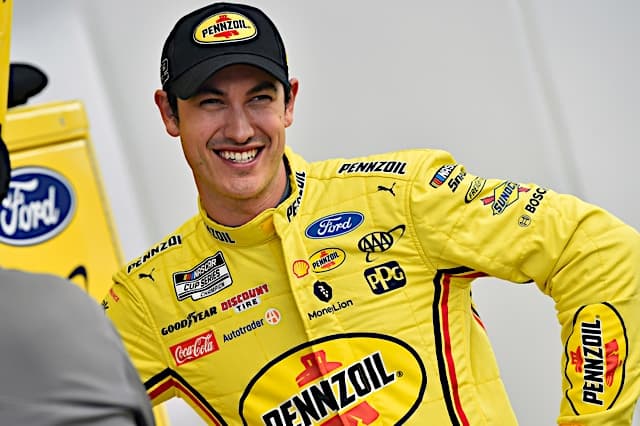 It’s time for an unpredictable afternoon of mayhem and madness as the NASCAR Cup Series heads to Talladega Superspeedway Sunday, June 21 for the GEICO 500. The race is set to get underway shortly after 3 p.m. ET and will air on FOX. Get those NASCAR DraftKings rosters ready!

This weekend is the first race on a superspeedway since Ryan Newman’s terrifying accident in February’s Daytona 500. NASCAR brought Newman’s and Corey LaJoie’s wrecked cars to the Research & Development center for investigation, then announced changes to the cars for this race last month. Some of these include an extra roll bar support bar, no aero ducts and a smaller throttle body size. They all are made to improve the vehicle’s safety, in part by lowering speeds.

Though the speeds should be lower, it doesn’t really change how I create my lineup. NASCAR decided to eliminate the lone practice for this event, which basically is a recipe for disaster. How? Well, if something was wrong in the car that the crew didn’t catch before the race, it could appear in the midst of the draft. If the driver isn’t able to get down to pit lane right away to fix it, a major wreck could occur early on involving half the field.

However, these are professional drivers, so the racing should be settled, for the most part, until pit stops and the end of the stages. Still, the Big One (or two) can happen at any point, so it’s important to know who tends to avoid trouble when creating your roster. Many of the drivers below have figured out ways to get through the carnage, but there are others that won’t fit into one lineup.

One more note: it may be wise to group the same manufacturers together. Oftentimes Fords, Chevys and Toyotas will work together in the pack among themselves and fill up many of the positions in the top 10. For example, in last year’s GEICO 500, Chevrolets claimed six of the top 10 spots, including the podium.

Before I move on to this week’s picks, let’s go over what happened last Sunday at Homestead-Miami Speedway.

Ouch. Kevin Harvick had some problems Sunday night, including a run-in with Ryan Blaney on pit road which set him well behind by the end of the first stage. Martin Truex Jr. also didn’t have the kind of speed that his Joe Gibbs Racing teammate Denny Hamlin had.

Even with these setbacks, this score just missed cashing the $1 double up. Meanwhile, in the $1 Happy Hour tournament, 259.50 fantasy points were needed to earn $1.38.

Logano is mostly known for his aggressive blocking style, especially in front of the pack, which is probably why he’s been so good at ‘Dega recently. He won this race two years ago and has six top fives in the past nine events. Additionally, Logano’s led 263 total laps in that time span. That’s remarkable since pack racing typically involves multiple drivers leading just a few laps apiece.

While the No. 22 Team Penske competitor struggled in many races since coming back from the COVID-19 postponement, he still has two wins, three top fives and six top 10s thus far. Logano definitely doesn’t have the same consistency that his cohort Brad Keselowski has, but he can still get back on track at Talladega. Look for him to work with his fellow Fords and stay near the front of the field.

Yipes, Bell is pricey. So why did I still pick him? Well, for one, he’s starting near the back (35th) and can earn plenty of bonus points by avoiding all the wrecks. In fact, he did just that at Homestead last week, gaining 28 positions en route to an eighth-place result. He should have a similar performance at Talladega, too.

Also, the young rookie driver for Leavine Family Racing had a good result in last year’s Xfinity race. Bell started 10th and ended third after leading 16 laps. While Sunday will mark his first Cup race at the big track, Bell does have a few Toyota veterans around him who he can learn and draft with. Hopefully, the No. 95 team will stay out of trouble and score a top 10.

By the way, if you want play it a bit safer, Ricky Stenhouse Jr. is a good option. At just $8,400, the skilled superspeedway racer took the victory in this event three years ago.

Like Logano, Hamlin has figured out pack racing. He has three top fives and four top 10s in the past seven Talladega events. For some reason, all of these top 10s came in the fall. However, Sunday’s race is much later in the year than it was previously, so maybe he will break the pattern and earn another top 10.

No one could forget this year’s Daytona 500 (for unfortunate reasons), but Hamlin was the one who hung around at the end, pushing drivers ahead of him until he could make his move. Although Talladega is a much different track than Daytona, it still features pack racing at high speeds. The No. 11 JGR wheelman starts second Sunday, so he’s a risky play. But he’ll be around his fellow teammates, as Truex and Kyle Busch were drawn to start first and third. Look for them to work together with other manufacturers to stay near the front of the field.

Gaughan is a favorite daily fantasy play on these superspeedways as the Las Vegas native generally avoids the chaos in front of him. Earlier this year, in the Daytona 500, Gaughan scored 71 DraftKings points after nabbing seventh place. Like Bell, he’ll begin at the back (in the same spot as Daytona) and can earn a huge amount of bonus points with another top 10.

In the 2019 GEICO 500, Gaughan ended up eighth; the race prior, he was 12th. Unfortunately, last year’s fall event saw him flipping into the air and wrecking, which left him 27th. Still, he was near the front in the final 10 laps when the incident occurred. Keep an eye on this skilled underdog.

After three straight weeks of starting second, Almirola began last week’s race at Homestead 21st. He had a strong performance all night that resulted in a fifth-place finish; he also scored 57.5 DraftKings points.

Though Almirola will begin 15th on Sunday, his recent history at Talladega shows he’s on track for another good outcome. The No. 10 Stewart-Haas Racing driver has earned seven straight top 10s since the fall 2016 event. This streak includes a fall 2018 victory where he led the final lap as former SHR teammate Kurt Busch ran out of fuel. Almirola hopes to tie Dale Earnhardt Jr.’s record of eight straight top 10s, and possibly win, if he can get some help from other Fords.

LaJoie may not have as much experience at Talladega, like his peers, but he did finish seventh last fall. He also gained 25 positions in the 2019 GEICO 500, just missing out on a top 10. And, of course, we know what his Daytona 500 was like at the end. LaJoie earned 64.8 fantasy points with his eighth-place finish. The No. 32 Go FAS Racing driver could potentially record another big score if he can avoid the carnage.

Hopefully, Lajoie can put a recent beef with Hamlin behind him and just focus on the task at hand: earning another top 10.

Another Outlaw win for Kyle Larson.