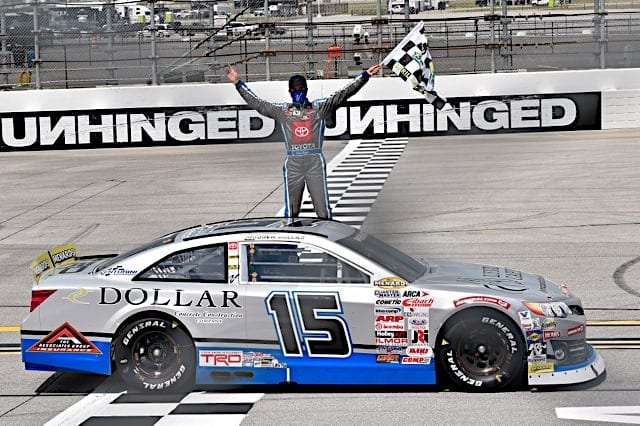 With two laps to go in the 2020 General Tire 200 at Talladega Superspeedway, Michael Self and Riley Herbst made contact racing for the lead. Neither driver wrecked, series officials withheld throwing the yellow flag, and Drew Dollar snatched the lead and won the race for his first career ARCA Menards Series victory.

“I was just hoping the caution didn’t come out there. They let us go to the end and we put on a heck of a show,” Dollar told Fox Sports 1 after climbing victoriously out of his No. 15 Venturini Motorsports Toyota.

The first race back for ARCA following the outbreak of COVID-19 only saw the yellow flag displayed once, for the competition caution halfway through the race. To better ensure social distancing, pit crews were given five minutes to adjust the cars as compared to a normal pit stop.

The race itself featured two five-car breakaways, one before the competition caution and one after. During that first run, Dollar dominated, leading Herbst, Bret Holmes, Ryan Repko and Hailie Deegan. During the second half of the race, Deegan faded and Self emerged as a contender for the win.

The five-car breakaway left the Fox announcers wondering when one of those five drivers would make a move to get around Herbst for the lead and win the race. With two laps to go, Self, Dollar, and Repko – the three Venturini Motorsports teammates – drove to the outside of Herbst and Holmes.

Michael Self pulls off one of the greatest saves we've ever seen. pic.twitter.com/CmrNVlXbDE

Miraculously, nobody wrecked and Dollar won in only his fifth career start.

Wow. That was a lot of fun! Proud of everyone on this @VenturiniMotor team! So happy to park that @ToyotaRacing #Camry in victory lane here @TalladegaSuperS!! This trophy is awesome!!!!

Repko, Holmes, Herbst and Self were the top five finishers. After conducting his post-race interview, Repko was transported to the infield care center.

Self, who won the season opener at Daytona International Speedway, spoke with Fox Sports 1 after the race about the incident with Herbst.

“Unfortunately, it was not the position I wanted to be in right there,” he said. “We had the three VMS [Venturini Motorsports] cars there linked together. I thought we were going to make something really big happen and the No. 18 (Herbst) and I were kind of sawing each other out. The No. 15 (Dollar) gave me a really big bump and I started getting loose in the rear end and dancing all over all the place. I kept wandering down and kinda got hooked on the No. 18. Sorry to those guys; I’m sure it’s my fault, in their opinion. Just trying to get out there, fun racing up front and it wasn’t worse for us. It was awesome to be back today.”

Talladega is Holmes’ home track and he battled as he continues to chase his first career ARCA win.

“We stayed up front all day. It was a tough race gaining track position,” he told Fox Sports 1 in a post-race interview. “I wish it would’ve played out better than that but I’m never going to complain about an opportunity to race at Talladega. I wish the racing was a little bit better. It’s a blessing to be able to race here and we’re knocking on the door. We hate finishing third; it’s tough to keep our heads up but that’s what we’re going to do. We finished third last weekend (in the ARCA Menards Series East race at Toledo Speedway). We got some momentum to keep up and we’ll be in victory lane this season.”

How many more times are the TV announcers going to call colleague Katie Osbourne, Katie Holmes?