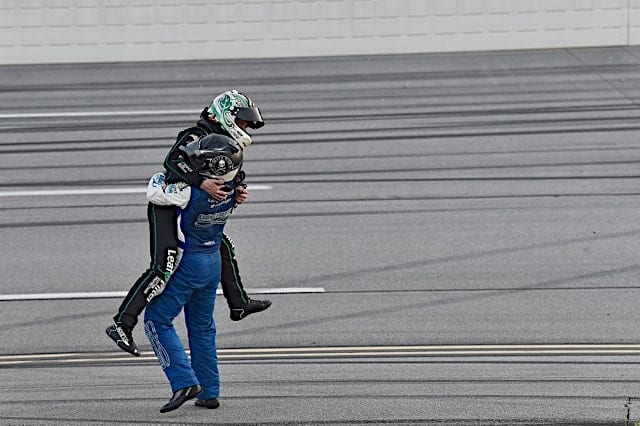 Haley started on the pole for the event and led a total of 16 laps.

The first two stages were action packed but had clean racing. The first incident of the day happened on lap 78, when Brett Moffitt turned Riley Herbst on the straightaway. The intensity started to pick up as, with less than 20 to go, there were six cars involved in a pile-up in turn four that caused a red flag.

The Big One struck with seven to go, causing a second red flag. With only three laps remaining, it made a mad dash for the finish as Haley, with help with his Kaulig Racing’s teammates, passed Jeb Burton for the win.

There were 22 lead changes in this race. Rounding out the top five were Ross Chastain, Burton, Austin Cindric and Moffitt.

With this win, Haley has won in all three top series and became the 32nd driver to do so. Kaulig Racing scored its fourth career win in the Xfinity Series. Kaulig Racing also won the Dash 4 Cash at Talladega with Chastain.

Kaulig Racing is raking in the earnings. In the last four races, Kaulig has won two races and two different Dash 4 Cash events.

Kaulig is on the verge of becoming a powerhouse team, which is impressive for a team that started four years ago.

There were a lot of great performances in the back half of the top 10 as well. Moffitt, who finished fifth, said this is the last scheduled race that he has in the No. 02 Our Motorsports car. Gray Gaulding grabbed a top 10 in his first start in the Xfinity Series this season in the No. 07 car. Alex Labbe scored his second top 10 of the season by avoiding the late wrecks.

The Big One struck again and hit JR Motorsports hard. After following the plan to stick together and go to the front, the team was in position to have a great day. But while racing at the front of the pack late in the race. Chastain checked up and Noah Gragson was tagged by Justin Allgaier and collected nine other cars. That wreck broke apart the juggernaut of JR Motorsports at the front of the field.

Three of the four JRM cars were involved in the wreck, leaving Burton by himself. Burton was competing for the win but was passed by Haley and his Kaulig teammates on the final lap.

Even though Michael Annett and Gragson recovered for a decent finish, Burton’s performance was hurt by his teammates not being up front with him.

The coverage of the NASCAR races on TV has seemed to gone a little downhill after the return from the pandemic. While the cars were coming to the checkered flag, Jeremy Clements spun off turn four. Fox was focusing on the finish of the race where Haley pulled away easily after coming through the tri-oval. There was a replay of the finish again yet there was no replay or mention of the spin by Clements on air.

This left some fans frustrated as it seemed Fox didn’t catch the spin which affected the results. Sometimes the announcers can miss things as they are not at the track and only have their TV in front. Yet, the announcers have a team behind at the studio and the track to help cover the race. TV is the only way that fans are getting to enjoy NASCAR.

I’m hoping the coverage improves and we can see what we miss at the track. Nothing is ideal, especially now, but we can make the best of the situation.

.The rollercoaster of 2020 continues for @JClements51 – looks like a P24 finish – got clipped by the 98 on final lap running P12 @TalladegaSuperS @XfinityRacing @NASCAR_Xfinity On to @PoconoRaceway. See ya there!

“I’m fighting for a ride, fighting for the next time I get in a race car next year. Anytime you win, it helps.” – Justin Haley.

“Well, I have never done that before.” – Chad Finchum on locking up his brakes entering his pit backward.

The NASCAR Xfinity Series only have to tackle three corners next week at Pocono Raceway on June 28 at 12:30 p.m ET on Fox Sports 1.

Justin Haley, one of the very few drivers who have won in Cup, Xfinity, Truck and ARCA. He deserves a good ride.