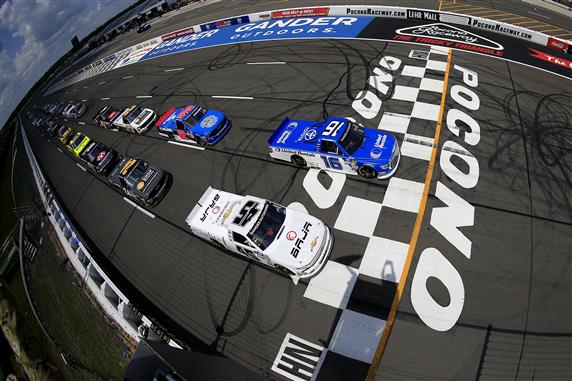 NASCAR has released the entry list for the NASCAR Gander RV & Outdoors Truck Series at Pocono Raceway on June 27.

With 40 entries, all trucks will make the race, barring any changes.

The No. 00 is TBA this week. Angela Ruch, who has driven for the team thus far this season, is not on the entry list.

Chase Purdy takes over the No. 24 GMS entry, which has been driven by Chase Elliott in the last three races.

Bryan Dauzat is back on the entry list with the No. 28 after not showing at Homestead-Miami Speedway.

Ross Chastain climbs back in the No. 40 truck for Niece Motorsports.

Brandon Jones will the third driver this season to pilot the No. 51 truck for Kyle Busch Motorsports. Riley Herbst and Kyle Busch have driven this truck before.

Henderson Motorsports is slated to run its first race of the season with Parker Kligerman behind the No. 75 truck.

Tim Veins will be behind the wheel of the No. 83 CMI Motorsports entry.

Robby Lyons will make his first start in the series this season in the No. 97.

The NASCAR Gander RV & Outdoors Series will tackle the tricky triangle on June 27 at 12:30 p.m. ET on Fox Sports 1.