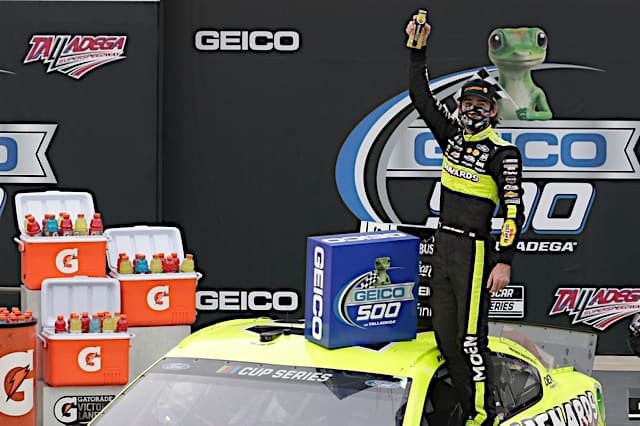 It took overtime to do it, but Ryan Blaney secured his first win of the 2020 NASCAR Cup Series season in thrilling fashion, narrowly edging out Ricky Stenhouse Jr. to claim the checkered flag for the Geico 500 at Talladega Superspeedway by just .007 seconds.

It was the fourth career Cup Series win for Blaney and his second at Talladega.

The Geico 500 started on a serious note after a noose was found in the garage stall of the No. 43 car of Bubba Wallace the night before the race. Before the green flag, NASCAR drivers and crew members helped push the No. 43 to the front of the grid as a sign of unity with Wallace.

When the race started, the drivers kept it clean with their racing but had to watch the radar as the rain was approaching. At the end of stage one, NASCAR stopped the cars for about an hour as rain poured down in turns one and two. Stage one ended under caution as Tyler Reddick became only the second Cup Series rookie to win a stage.

The first incident-based caution happened on lap 94 with John Hunter Nemechek as a left rear tire came apart and spun down the infield. Nemechek would continue without any damage

The race almost came to end for Blaney on lap 113. As his No. 12 Ford was getting pushed by teammate Brad Keselowski, Blaney got loose and saved the car. He even ended up passing the No. 47 of Stenhouse to lead that lap.

Seven-time champion Jimmie Johnson also almost ended up in the garage early as he spun off the bumper of Kevin Harvick. Johnson ended up finishing in the 13th position.

Fuel played a factor in determining the finish, as many of the top cars tried to conserve fuel. Nine cars at the front on the restart did not pit. Stenhouse did not get a good restart, which caused Harvick to get the lead on the white flag. Coming into turn three, multiple cars were involved in a wreck, but NASCAR chose not to throw the caution.

As the cars were coming to the checkered flag, Blaney was upfront trying to hold off everyone else. The lead cars wrecked about a few hundred feet from the finish line, but Blaney was able to stay in front for the win by the narrowest of margins.

The rest of the top five was Aric Almirola, who spun across the line backward, Denny Hamlin and Erik Jones. Nemechek scored his best career finish of eighth.

Wallace pitted before the final restart and ended up in the 14th position. After climbing out of his car, he met with the fans at the fence to celebrate with them.

The NASCAR Cup Series will next head to Pocono Raceway for a doubleheader, with the first race taking place on June 27 at 3:30 p.m. ET on Fox.

If Hamlin had been leading when the last lap wreck happened the caution flag would have been waved, but he still needed more time.