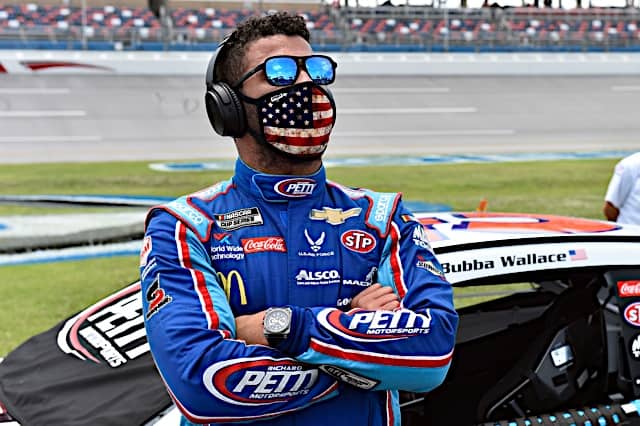 Arguably, one of the darkest nights in NASCAR history happened on Sunday night (June 21), when the sanctioning body made a statement shortly before 11 p.m. ET that a noose was found in Bubba Wallace‘s garage stall earlier in the day at Talladega.

Over the past month, Wallace has been an activist toward racial issues in the sport, pledging to make it a better place with NASCAR’s help. But the unity shown pre-race by all 40 drivers and teams on Monday (June 22) was a moment all NASCAR fans shouldn’t ever forget. I know damn sure I won’t.

With the emotions on his sleeve, Wallace was wheelin’ the No. 43 Richard Petty Motorsports Chevrolet. Hell, at one point, he raced to the lead with less than 30 laps remaining. But like many other drivers, Wallace didn’t have enough fuel to make it to the end, and was saved by a late-race caution.

With the help of Corey LaJoie‘s front bumper, Wallace made it to pit road under the final caution. And with a green-white-checkered finish, he drove up to 14th, his six top-15 finish of the season.

That’s important to note. Why, you ask? Last season, a year where Wallace brought awareness to people who fight depression because of the lack of results for the No. 43 team early on, he had just five such finishes the entire 36-race schedule.

With a 14th-place finish, @BubbaWallace earned his sixth top-15 finish in the opening 13 races of the season.

In the entire 36-race schedule last year, his @RPMotorsports team had five such finishes.

It’s safe to say Wallace is a star in the sport, and always has been dating back to his K&N Series days. Now, the finishes are coming, meaning his smile shines even brighter. With Wallace and other stars shedding light on social injustice issues loudly, it made Monday one of the most memorable days in the sport’s history.

Ryan Blaney is currently the hottest driver in NASCAR.

Riding the wave of momentum, Blaney went into Monday’s race (June 22) at Talladega — a place he won at in the fall — as one of the favorites. The No. 12 team didn’t disappoint.

Collectively, Team Penske led more than half the race, never leaving each others’ bumpers through the first two stages of the race. As the race began to play out and different strategies came into play, the three drivers, Blaney, Brad Keselowski and Joey Logano, went their separate ways, though not by choice.

After leading a race-high 63 laps, Blaney went on to score his first victory of the season and second at Talladega. In the process, the No. 12 team picked up its fourth consecutive top-five finish, the longest streak of Blaney’s career.

Stats from today's race at @TalladegaSuperS:@Blaney scored his first victory of 2020. Dating back to Atlanta, he has four consecutive top-five finishes — the longest streak of his career. #NASCAR

Forget four straight, dating back to the Coca-Cola 600, Blaney has earned six top fives in seven events, going from 11th to third in the championship standings. Red hot.

Whoa, where am I going with this one? 21 YEARS!

Prior to a breakout 2018 NASCAR Gander RV & Outdoors Truck Series season, many people probably hadn’t heard the name Justin Haley. And that’s after he ran 21 races in 2017 with GMS Racing.

But a victory at Gateway Motorsports Park in 2018 led to two more later in the year. That led to a Championship 4 appearance.

In 2019, Haley ran the full Xfinity season while participating in select Cup races. Flashback to last summer, who was standing victorious after the last July 4 Weekend race at Daytona International Speedway? Haley. He piloted the No. 77 Chevrolet of Spire Motorsports to its first victory, staying out while every other driver pitted. With a strike of lightning and ensuing precipitation, Haley had victories in two series.

Then there’s Saturday’s race, where Kaulig Racing has proven to have one of the better superspeedway programs in the Xfinity Series. The No. 11 paced the field for 16 laps, holding off teammate Ross Chastain at the end to score his first series triumph.

With the victory, Haley has become the second-youngest driver to conquer victories in the top three national series at 21 years and 53 days old. The only driver he’s behind? Kyle Busch, who will go down as one of the best drivers of all-time.

Took the unconventional route.@Justin_Haley_ is officially the 2nd youngest driver to get a 🏁 in all three @NASCAR national series. pic.twitter.com/HoR5U7IzpY

3 thoughts on “NASCAR Stat Sheet: Bubba Wallace, an Activist Off the Track, Improving on Track”