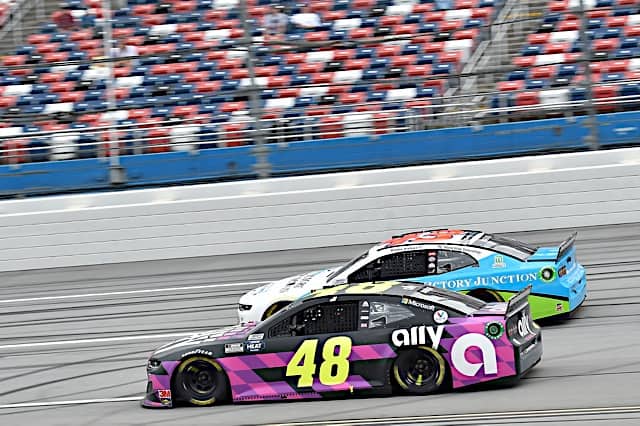 It’s hard to win at Talladega Superspeedway, and it’s even harder to go back-to-back. Entering Monday’s rain-delayed race, nobody had achieved that feat since 2007. That ended on Monday, though, as Ryan Blaney powered his way to the front, surviving a fuel mileage battle and a hairy late restart to pass Kevin Harvick on the final lap to win by .007 seconds. Blaney also won the fall race by the same margin, a matter of inches.

Blaney easily had the strongest car on the day, but as the laps dwindled, he had to play the conservative role to save fuel. He got the green light just before Harvick turned Jimmie Johnson to bring out the yellow flag and was charging forward. That put him in position to capitalize on the restart. For a few moments it looked like he wouldn’t get there, as Ricky Stenhouse Jr. got a terrible start behind him, but a furious run in the last mile while fending off a charging Erik Jones gave Blaney his first win of 2020.

A pair of rookies also had quite a day. Tyler Reddick snagged his first career stage win, capturing the first segment, and John Hunter Nemechek picked up his career-best finish, coming home in eighth. After recovering from a spin earlier in the day, Nemechek had a fantastic run in the tri-oval coming to the checkers, but got turned by Jones trying to take it three-wide for the top spot. Nemechek slid across the line for that top-10 finish, his second of the year.

What … was the hidden gem in the race?

This.  THIS is my NASCAR.

Polesitter Martin Truex Jr. only led four laps on Monday and wasn’t really a factor, but what put the real nail in the proverbial coffin was getting tangled in one of two incidents coming to the checkered flag. Truex was collateral damage, but damaged nonetheless. He wound up scored 24th.

Last week’s winner Denny Hamlin got lucky early on. He had to pit for a flat tire, but the caution flew a lap later for rain, allowing him to take the wave-around and get back on the lead lap when racing resumed. Hamlin has become one of the most reliable superspeedway drivers in the series, and Monday proved no exception. The reigning Daytona 500 champion finished a solid fourth.

Active Talladega win leader Brad Keselowski has five trophies from the track, but didn’t add to his total on Monday. Unlike his teammates, Keselowski seemed to struggle with his race car, and while he was often in the lead pack, he didn’t lead the race and wound up 19th.

Active Cup win leader Johnson had a fast car, good fuel strategy and was in good position with fewer than 10 laps remaining. What he didn’t have was luck. Johnson was gunning for the lead, mileage not an issue, and clear track ahead. Behind him, Harvick got a run and got into Johnson’s left-rear bumper, spinning the No. 48. Johnson didn’t hit anything and rebounded to finish 13th, but the win eluded him once again.

It was a relatively tame race for Talladega. There were only a couple of incidents in the early going — that’s to be expected because teams need to save their equipment, but even the closing laps didn’t produce the carnage that superspeedway races generally do. Other than a last-lap pair of incidents that collected several cars, most incidents were tame, with one or two cars involved.

The race comes on the heels of some rules changes designed to make superspeedway racing safer, and while one race isn’t a real indicator of whether that package worked, it seems like it’s a good place to start.

The fewer multi-car wrecks these races produce, the better. Cars at this level can be $500,000 investments per race; tearing them up is tough on any team, let alone the smaller ones who don’t have a lot of other cars back at the shop to choose from. Obviously, the less crashing going on, the safer the races are, and that’s always a plus. Finally, it makes for better racing when more than a handful of cars is in it at the finish, and it’s a heck of a lot more fun for fans to watch a race when you don’t have to wonder when the inevitable Big One is going to happen and when it does, if it’s going to take out their favorite driver this time or if he’s going to bite it later.

This was one of the better plate races in years, at least since the end of tandem drafting. Hopefully NASCAR (and the drivers) can give fans more superspeedway races like this one in the future.

Top of the list here of course, is the continuing FBI investigation of the garage incident that prompted the prerace show of solidarity to Bubba Wallace. There are plenty of questions here. Not just who did it, but whether that individual or individuals will be charged with a federal hate crime, which can carry a two-year prison sentence. A lifetime ban from NASCAR is all but assured, and hopefully the perpetrator will be found and named so the sport can move forward positively.

The pre-race moments were moving and special, and answered some of the questions about how the sport would handle racism within its ranks. But what NASCAR does next will be something everyone should be watching.

How … important is the upcoming doubleheader at Pocono?

The Cup Series heads to Pocono Raceway this weekend for a scheduled doubleheader at the Tricky Triangle. How the teams and drivers handle the races, racing the same car unless a backup is needed, how it’s received on television (no fans will be present) and how fans react will be key as NASCAR may consider adding more double-up weekends in the future.

It will be a tough test for race teams as there’s no practice, so if they’re not fast off the truck, the first race could become a very long test session in a hurry. And with the finishing order Saturday determining the start on Sunday… well, it could turn into a long weekend very fast.

On the other hand, doubleheaders could be something NASCAR explores more in the coming years. That could mean a shorter season overall without cutting races and an excellent value for fans, who could take in two Cup events and a supporting show or two in one weekend of hotel stays or camping. There’s a lot riding on this weekend.