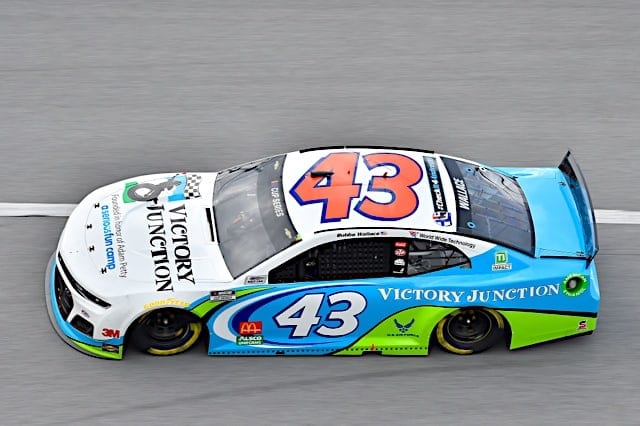 After an investigation of the reported noose found in Bubba Wallace‘s garage stall at Talladega Superspeedway last weekend, the FBI has concluded that “no federal crime was committed” and that the noose had been in that stall since 2019, the FBI and NASCAR announced Tuesday, June 23.

The rope tied into the shape of a noose was found on Sunday after the race had been postponed, leading to a show of support for Wallace on Sunday by all of the drivers and crews.

“…After a thorough review of the facts and evidence surrounding this event, we have concluded that no federal crime was committed,” the FBI said in a statement.

The FBI added that it will not pursue charges.

“The decision not to pursue federal charges is proper after reviewing all available facts and all applicable federal laws,” it said in the statement. “We offer our thanks to NASCAR, Mr. Wallace and everyone who cooperated with this investigation.”

“We appreciate the FBI’s quick and thorough investigation and are thankful to learn that this was not an intentional, racist act against Bubba,” its statement read. “We remain steadfast in our commitment to providing a welcoming and inclusive environment for all who love racing.”

In addition, Wood Brothers Racing added a statement of their own, indicating that an employee had noticed the noose-shaped rope last fall and had alerted the team and NASCAR when Saturday night’s events transpired. The No. 21 car was assigned to the fourth garage stall last fall at Talladega.

STATEMENT ON THE COINCIDENCE OF OUR STALL FROM 2019 AND THE INVESTIGATION pic.twitter.com/SJgKus8o8T

In the aftermath of the initial discovery, drivers showed their support by pushing Wallace’s car out to the front of the grid prior to the race.

Wallace went on to finish 14th at Talladega, giving an emotional interview after the race. He’ll head to Pocono Raceway this weekend for the Cup Series’ doubleheader at the triangle-shaped track.

Much ado about NOTHING!

see how that plays out on gma and the view.

Well at least NASCAR milked record ratings for a makeup race.
I’m sure the retractions will come quickly. Well I won’t hold my breath.

I guess when you’re virtue-signaling, everything looks like racism.

Mine
Reply to  Carl D.

Stop calling a garage door pull a noose. Start calling bubba Wallace, the woke crybabies, and their enablers our for being effing idiots.

racehub has steve Phelps on and he said NASCAR will still continue their investigatio?

I hope NASCAR keeps investigating! Find out who said ” that garage door pull rope looks like a noose! “. And then if the investigation finds out it was developed into a PR stunt, ban that person for life.

Steve and NASCAR spun this just how they wanted it to go. They spiked the ratings for the race and they also spun it afterwards to say how proud they were with their community, sticking together and unity. The whole thing was a hoax from the very beginning it and many bought it hook, like and sinker.

I assume Bubba Wallace and NASCAR will apologize for the ridicule and vitriol directed at those who dared to question the official narrative. I also assume that all the NASCAR “journalists” who were lecturing us over the evils of racism in NASCAR will apologize for insulting the sport they deign to cover. Lastly, I suppose that those responsible for perpetrating a fraud by calling a looped pull string a “Noose” and then proceeding to denigrate an entire sport – will be banned from the sport for life.

I 100% agree! NASCAR is destroying its base! We are not racists and we sure as heck do not need lectures from NASCAR, or Bubba. Quit trying to be the stupid NFL and let’s just focus on racing.

Wow all that “woke” pandering “white guilt”, “white privilege” energy wasted!!!!!!!!!!!!! What a bunch of jerks. Is Bubba half white/half black and his white friends gonna still lecture me and mine telling us we have sinned against our fellow man for being born white?

A blind man knew this was BS. Thank God for “Garage Cam”, I think they inadvertently helped to unravel this horrid chapter in our history (sarcasm).

Bubba milked this for all it was worth, what will he want his needy 15 minutes for next?

God, I can’t stand this guy, nor the lemmings who jump right away into this nonsense without thinking remotely that maybe just maybe…IT ISN’T A FLUCKING NOOSE or whatever they see when they look at the clouds regarding “racism”.

Poor Bubba,got all offended for nothing. Imagine that. I would hate to know I was that sensitive. Well maybe I am because I am DONE with NASCAR.

Nascar is the real looser. They new the ‘noose’was there in oct of 2019 so why did they let the media and bubba go with all the publicity when they new it was not directed at the 43 team was all the publicity worth it What a sham for nascar

This whole deal is typical 2020 “news”. Why as a culture do we all still give them credibility. Worse, with all the rioting and protests going on, it is very close to yelling “FIRE!!!” in a crowded theater. Someone should pay for inciting lunacy. NASCAR should have more balls then to bend to the mob. That is what is really going on right now, an angry mob is doing what they want and everyone is afraid to stand up to them for fear of being called a racist. And the media feeds this false narrative daily.

I think it is too bad that the person who noticed the pull chord “noose” in Oct. of 2019 didn’t have the nutz to come forward when he heard of the supposed incident.
I think it is very cowardly of individuals to not come forward when they know things are not what they seem to be. Probably because of fear of the mob.
Come on U.S. citizens. Step up when you see a wrong just like all us veterans, health workers, food processors, and police do. That is your responsibility so that you can enjoy your Constitutionally guaranteed rights.

I recognized my responsibility, stepped forward and risked being shot down for 2 years in Viet Nam in my effort to protect our Constitutionally guaranteed rights. I still enjoy NASCAR racing, especially Cup, despite all the whining articles, comments, hollow threats, and rule changes. I hope that someday I will find an opportunity to attend and enjoy just one NASCAR Cup race. Until then, I will watch every live race broadcast on TV and enjoy the experience. Probably even a few re-runs too.

Thank you Adam Cheek for just reporting the facts without any sanctimonious slant or opinion. I really appreciate it.

Y’all are a bunch of thin skinned whiners… Questions: 1. How did Bubba see the “noose” since drivers must go straight to their motorcoaches until called to pit road for the start of the race? 2. If Bubba didn’t see the “noose” how could he have reported it? 3. If he didn’t report it, who did? 4. Who led the whole “rally ‘round Bubba thing? (Answer: Jimmie Johnson and Kevin Harvick). 5. Does your outrage make you feel better?