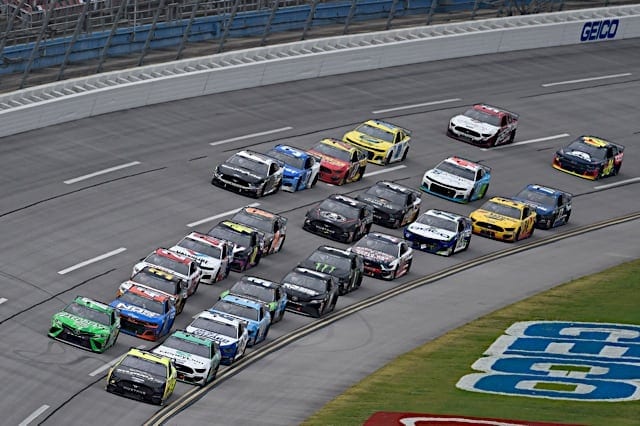 1. No practice, no qualifying? No problem?

Until NASCAR was forced to rethink race weekends, nobody thought much about practice and qualifying. They’d been done forever, and nothing about either seemed to be broken. And about 99% of the time, NASCAR should leave things that aren’t broken alone. That’s how we got the playoffs, after all.

But here’s an exception. The racing has been better without two or three hours of practice beforehand. The bigger teams still have an advantage, but nobody seems to have gotten as far ahead of the field since practice went away, not on the weekly basis we’ve seen before. Teams have expressed a desire to keep it this way.

The random draws for qualifying have worked out fine, but is there a better way NASCAR should consider for 2021 and beyond?

How about this: On the day before the race (day of for NASCAR’s Xfinity Series and Gander RV & Outdoors Truck Series), allow all teams a 15-minute shakedown session to make as many laps as they want to … and either their fastest lap time during that session or their average is used for qualifying. Allow them to come to pit road to make adjustments one time, with no change of tires. After that, once they leave the track, their session is over. This gives teams a little track time, allows them to qualify based on performance, but doesn’t give the big teams time to pour resources into the cars that the smaller teams can’t.

A second short practice before the qualifying practice could be held for rookies, the first time they visit any track in Cup. This allows them to get a feel for the track without the pressure of qualifying. That comfort could translate to more confidence on race day, and with that, better racing. But once they have completed a race at that level at a track, they no longer get the second session unless NASCAR chooses to send them to it for safety reasons (like they caused a problem in the previous race).

For Xfinity and Trucks, where many drivers are inexperienced, practice sessions should be longer, for safety reasons. It would be easy to base the time drivers or teams get on the number of races they have run, and Cup drivers could get none. Safety is the main concern, and allowances could be made in those series as for Cup rookies.

This system would allow teams to make fixes they couldn’t make during a race, and it allows teams not in the top 12 to still qualify better than that if they can. But it doesn’t give teams a major advantage on race day either, and it cuts costs for tires and other parts and pieces.

2. But what about fans who come for the weekend?

The biggest problem with dropping almost all on-track time on the days before the Cup races is that many fans come for the weekend, and part of that is seeing their favorite Cup drivers on track for at least two days.

But what if that was replaced by seeing their favorite drivers in a different setting, maybe a more intimate one?

The reason for holding the Cup session the day before the race, when it could easily be held race morning, is simple. The drivers would be required to be at the track, and could then also be required to spend the time they would have spent in practice in previous years with the fans in some capacity. There could be group Q&A’s by team or manufacturer, individual autograph sessions at souvenir trailers, or other special events.

Some drivers are runners, so why not a 5K race on the racetrack, with entry fees going to the driver’s charity of choice, where the driver runs with fans or officiates and hands out prizes? That would take roughly the same amount of time as a practice session. Several drivers could be involved, with proceeds split among their charities.

There could be events for kids, whole families, or individuals. There could be group garage tours by the track during the times when cars are not on track, with ticket costs for that experience donated to charity. Every race ticket purchased could guarantee at least one driver event, like an autograph session, Q&A or kids’ event. Even if the choice of driver wasn’t included, it would give fans a chance to get up close and personal. Cutting practice has the potential to increase fan interaction, not decrease it.

One thing that did come to light with the no practice and qualifying was the relative inexperience of some drivers in the Cup Series. A couple of times, drivers attempting Cup races hadn’t turned a lap at the tracks they were running in any vehicle. That is a safety concern, and maybe it’s time to revamp the licensing process.

Once upon a time, in order to get a Cup license, a driver had to start on short tracks, and if and when he was deemed capable, he could move up to one-mile tracks and then larger speedways. Of course, that was easier when there were more short tracks on the circuit, but there should still be a process.

Drivers should be required to race in lower NASCAR-sanctioned series before moving to the next level. That could mean a certain number of races in ARCA East/West before being allowed to move to Trucks or Xfinity and, finally, Cup.

There’s not only a safety benefit here, but it helps keep drivers from being rushed into the top series when they aren’t ready, which more often than not ends with that driver being labeled “damaged goods” if they doesn’t perform right out of the box.

It also could potentially benefit teams in those lower series as they could potentially have some up-and-coming youngsters in their ranks who are not already snapped up by bigger teams, and with that a chance to gain some exposure.

Requiring more quality experience from drivers would ensure safety and potentially save a few careers and make the racing more competitive. What’s not to like there?

This weekend, the Cup Series runs its first scheduled doubleheader — and the first one to be run on consecutive days — at Pocono Raceway. This could well be something that NASCAR will pursue more going forward.

Midweek races at tracks within a couple hours of home base in Charlotte, or doubleheader weekends elsewhere, are an attractive option in that they could shorten the calendar length of the season considerably without subtracting races. That’s good for teams, and it could be good for fans, too, as a shorter season means there’s less conflict with football. That might appeal to the networks as well.

The midweek races didn’t exactly rake in ratings, and ratings translate into advertising dollars for the networks in the long run. If people don’t watch, advertisers don’t buy time.

It’s certainly worth consideration for both two-race weekends and midweek races. NASCAR doesn’t appear to be willing to cut the Cup season down by a half-dozen or so races, but condensing them could be an option.

5. While we’re at it, can we talk about start times, please?

The overwhelming response from fans seems to be that they prefer earlier start times, and many add they aren’t watching the later races because they bleed into dinner and family time or home project time.

Perhaps a 2:00 p.m. ET start would be a good compromise for most races. By that, I mean green flag at 2:00, not pre-race starts at 2:00 and the race starts at 2:30. The broadcasts won’t run into prime time television, but they would be over by dinnertime on the East Coast. West Coasters would still have time for church or errands, and would have some day left afterward as well. Still not ideal, but a better option than going green at almost 4:00 p.m. some weeks, even for East Coast races.

After more time to think about these proposals, I may have some reservations, but they all seem like reasonable and positive ideas to me, especially the refuced practice time.

Hi Aimee. This is a pleasant article. I think your suggestions have merit. I hope the NASCAR castle will take them in consideration.
I used to build and race stock no-body VW’s in the early 70′ on an eighth mile dirt and then paved egg. Attended a few local races after that. They just weren’t my style. But NASCAR captured me even before Cup when I could find it on TV. I have tried to watch every live Cup race I could find. I seem to get physically sick when I know a live Cup race is being broadcast and can’t watch for some reason. Happily I found full race replays.
I’ve been hooked for a long time now despite poorly written sanctimonious articles, whining condemning comments, rule changes, time broadcast changes.
I hope that one day I will find a way to attend and enjoy just one NASCAR Cup race. Until then and long after, I will enjoy the Cup and a few lesser races broadcast.
Thank you for your pleasant article.
David