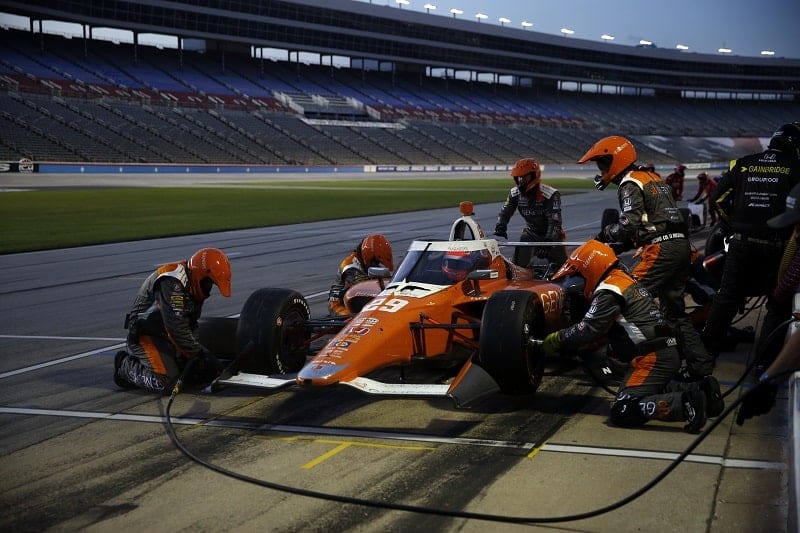 James Hinchcliffe lost his long-time ride with Schmidt Peterson Motorsport and was left hanging for the 2020 IndyCar season, then Andretti Autosport extended a lifeline. And then the COVID-19 pandemic hit. Hinchcliffe’s latest NTT IndyCar Series campaign is going to be an uphill battle all the way, but if he can thrive, he could make a new home for himself with Andretti.

James Hinchcliffe’s 2020 season is defined by change. After he was dropped by his former team Schmidt Peterson Motorsports as it transitioned into Arrow McLaren SP, Hinchcliffe signed with one of his former teams, Andretti Autosport, for just a few races. It will be the first time he has not contested a full IndyCar season since his life-threatening accident in 2015.

Certainly not the finish we wanted in the @Genesys 300, but great to be back on track with @FollowAndretti . Was working a top 10 before a problem in a stop put us a few laps down. One of those days! ⁣
⁣
Head down and let’s go get @IMS!⁣
⁣
⁣#CHALLENGEACCEPTED // #GENESYS300 pic.twitter.com/YMKKBo45IC

James Hinchcliffe is beloved. The Canadian driver has been a longtime fan favorite and has served as a face for IndyCar even during the years when he struggled. He has almost a decade of on-track experience, and the resilience that constantly keeps him fighting to stay on the grid. If there’s anything that will keep Hinchcliffe present in his abbreviated year, it’s going to be the fact that fans love him and desperately want to see him stick around.

Hinchcliffe can also be incredibly determined when he has a point to make. The year after his accident at Indianapolis Motor Speedway, he qualified on pole for the Indy 500. He knew that it was his chance to prove himself, and he seized that opportunity. It’s very likely that we’ll see Hinchcliffe pull off some unforgettable drives in 2020.

It might be easier to talk about James Hinchcliffe’s 2020 challenges than his strengths. An 18th place finish at Texas Motor Speedway certainly wasn’t the result he would have hoped for in his return to Andretti. Now he only has two more races to prove that he deserves a place on the grid for 2021, and he’ll be struggling to keep up with drivers and teams who are racing the full season.

His biggest battle this year will likely be finding a full-time ride for 2021, and it isn’t going to be easy. 2020-21 are looking to be transition years in the NTT IndyCar Series, where members of the old guard like Tony Kanaan filter out while younger talent from around the world pours in. Many of the full-time drivers who are sticking around have signed multi-year contracts, and there are countless other part-time drivers who will be campaigning for the very same seats Hinchcliffe is.

Unfortunately, 2020 won’t be a comeback year for James Hinchcliffe. Not only does he not have enough races to show his skill, but the races he has left have historically resulted in pretty mediocre finishes for him. There won’t be any race wins over even top-10s top-10s in Hinchcliffe’s 2020 IndyCar season. But he has an ability to remain a fan favorite even when he struggles—and that could help him find a landing spot for 2021.