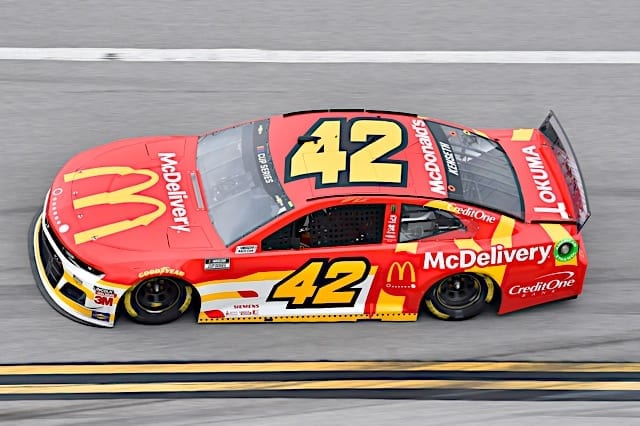 Since NASCAR returned to the track just over one month ago, we have seen some drivers show signs of improvement compared to before the break and others plummet in performance. Matt Kenseth came off the sidelines to drive the No. 42 for Chip Ganassi Racing, but it has not been all fun and games. He has struggled to say the least, and he has not been the Kenseth we are all accustomed to seeing.

What are the reasons for his struggles? Can he bounce back and even steal a win and make the playoffs?

Bubba Wallace has been all over the news for the last several weeks for all of the social injustice issues going on within the sport and in the world, but one thing overlooked, perhaps, is his performance on the track. Quietly, the No. 43 team has four top-15 finishes in the last five races, which for an underfunded team like Richard Petty Motorsports is extremely impressive.

What can Wallace do the rest of the season? Can he legitimately be a playoff contender if he continues this streak? What are the realistic expectations week to week for him?

Q: What do you think could be the cause of Matt Kenseth’s poor performance since his return? John F., Green Bay, WI

A: There are a few factors as to why Kenseth has performed on a low level since taking over the No. 42. Let’s not forget, he had been absent from the Cup Series since the end of 2018 after finishing strong in the No. 6 car for Roush Fenway Racing that year.

Kenseth is a Cup champion, Daytona 500 winner and future Hall of Famer in the sport, but comes in and takes over one of the better rides in the Cup Series and cannot do much with it. Seems like a fair statement, and here is why. First, he had never driven this intermediate package before the sport opened back up on May 17 at Darlington Raceway. To go in cold turkey to a racetrack as tough as Darlington with a package you’ve never driven, I’d imagine, is one of the most difficult things a race car driver would have to do. What did he do? Finished 10th. Impressive.

Fast forward to now and he has not had a finish better than 15th since. After his last-place finish at Talladega on Monday (June 22), he sits 30th in the points standings. With only 13 races remaining until the playoffs, he is going to have to make up a serious amount of ground. Many thought he would have an easy time getting to the top 16 and maybe even win a race to make it into the playoffs. It is not looking likely at the moment.

Crew chief and driver chemistry is always one of the most important things when it comes to success in the sport. Kenseth has had success with almost every crew chief he has worked with throughout his career. However, maybe this crew chief pairing is not his fit. Maybe Kenseth doesn’t know exactly what he needs at the moment with the new package. Maybe they still are learning each other. There are a lot of maybe’s in there that could all potentially contribute to the struggles.

Lastly, having no practice or qualifying has severely hurt him, though he self-admittedly enjoys the schedule. Even a champion like Kenseth needs time to get used to a new thing in the sport, especially the car and setup he has under him. It’s safe to say setups are nowhere near the same as they were two to three years ago when he stopped driving. It takes time to learn something, so possibly he just needs that to get where he needs to be.

ALBINO: KENSETH NOT ADAPTING AS QUICKLY AS HE HOPED

Whatever the case may be, this will not affect Kenseth’s legacy as a driver. He was not even supposed to be in the series going into the 2020 season, so for him to come out of retirement (shh, he never actually used the word), and even be competitive inside the top 20 like he has done, is an impressive feat. Do I see his season improving? Yes, I do. As he gets used to the racing and package these days, he will get better. Short tracks utilize the package he is used to from 2018, and he showed at Bristol Motor Speedway that he can still drive, as he ran 12th to 15th most of the day.

Making the playoffs is going to be tough, but anything can happen. The first thing to focus on for the No. 42 team is getting Kenseth acclimated and finishing races strong. Bad luck is part of racing, and he has had plenty so far, but that can all change with one solid performance. Expect that soon out of him — you will not keep a champion down for long.

Q: Can Bubba Wallace be a true contender for a playoff spot the rest of this season? Rich W., Daytona Beach, FL

A: Let me start out by saying Wallace is one of the most brave and outspoken drivers I have seen in recent memory, and I applaud everything he has done recently. He has been through a lot, and there currently is not a more popular driver in the sport.

With that said, there could be an outside chance he contends for a playoff position as the Cup Series approaches the postseason in September. He has had a stretch of runs since the return from the COVID-19 break that proves the team has speed.

Being a little less than 50 points out right now is a lot for this time of year, but nothing is impossible to overcome if you have the speed and can earn stage points and good finishes.

Entering 2020, it had been a struggle for him his first two full-time Cup seasons. He has had flashes of brilliance in the No. 43, most notably last season with his third-place finish at Indianapolis Motor Speedway and his win in the second stage of the All-Star Open to get into the big show. However, it seems like Richard Petty Motorsports has given Wallace better cars this season, and he has learned how to finish these races strong compared to years past.

It’s probably going to take a few top-10 finishes and a top five or two to make up the ground, but with the raw speed the No. 43 has shown, it might not be that unrealistic. Over the years, Wallace has proved he can wheel a race car, and if his team continues to put together these strong races, anything can happen.

It might be a year or so before RPM takes that next step to being a race-winning team, but the No. 43 crew has taken a big step in the right direction this year. To go from being a 21st-25th place team to scoring solid 12th-15th place finishes most weeks shows steady improvement. Wallace has gained the confidence in himself, and his competitors have the utmost respect for him, which can fuel a driver to success.

By no means am I saying he will win a race, but do not be surprised if he shocks the world and does it. It may not be on outright speed, but with the way some of these races go, he might be able to sneak in there. Ultimately, I think he comes up short of making the playoffs, as it will take more than what he’s been able to do. Still, never say never.

If only RPM didn’t have defective hubs a two races in a row while running in the top 15. Those two races cost him 30+ points!

Bubba has had flashes of brilliance? And you want to be a writer? Better go back to school sonny. I think you’re an idiot.

bubba aka jesse Smullett is a loser on and off the track.

If Bubba doesn’t make the playoffs it will be self-inflicted. He will be given the treatment the Final 4 would get at Homestead, because heaven help the driver that wrecks him.

Bubba has the talent but is not in a competitive car. Period.

bubba has to put full effort on driving. he has talent but i do not think he is on the same page as Hamlin Harvick Kyle B Brad K. and other top drivers. the top talented drivers win most of the races, reason super talent and super teams that have great sponsors. four major owners that win consistently. those 4 have the resources, drivers and that is the way it is in Nascar today!

He was cast off. Now a fill in driver. Good for him. Riding in the back to stay safe.