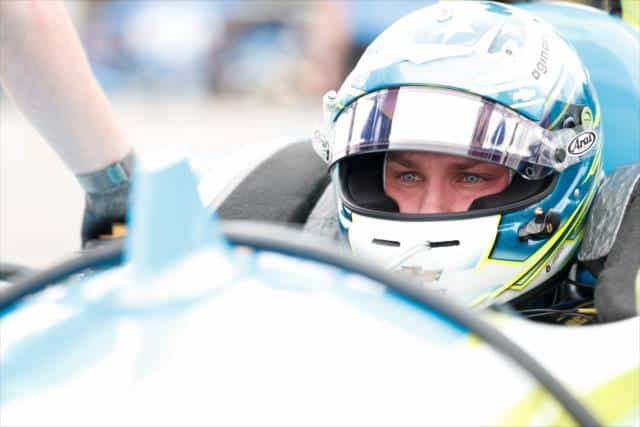 NTT IndyCar Series veteran Sage Karam returns to the driver’s seat for Dreyer & Reinbold Racing this year, the team announced in a statement on Tuesday, June 23.

The 25-year-old racer will be behind the wheel of the team’s No. 24 Chevrolet starting at the GMR Grand Prix, held at the Indianapolis Motor Speedway road course on July 3-4.

Karam will sport a livery sponsored by WIX Filters, which also sponsored him and the team the past two years.

BREAKING: We are pleased to announce that @SageKaram will be driving the GMR Grand Prix at Indianapolis Motor Speedway in the black and yellow WIX Filters car. We are estatic to make our first road course start since 2013.
–#WIXFilters #WIXIndy #DrivenByDRR
–@wixfilters @mecum pic.twitter.com/7sbGym0Qun

“Dennis and his Dreyer & Reinbold team have been so loyal to my racing career and I can’t thank them enough for their support,” Karam said in a statement. “I look at Dennis as almost like a second father. I can go to him about anything. He’s one of the good guys of motorsports. I feel like I’ve been lucky and blessed to be able to come into this team as well as with a great partner like WIX Filters. I have been with them many years too.”

Karam raced with the team from 2016-18 and into 2019 before securing a two-race stint with Carlin later in the year. He has raced for Dreyer in the last four installments of the Indianapolis 500, with a best finish of 19th in 2019.

Karam also won the 2013 Indy Lights championship, the only year he competed in that series, as well as the 2010 F2000 championship, during which he won nine of the 12 scheduled events.

His last race overall came at Iowa in July 2019, when he finished 22nd with Carlin.

The road course event at IMS marks Dreyer’s first at such a track layout in more than seven years.

“We had planned to compete in the NTT INDYCAR SERIES season opener at St. Petersburg with the expansion of the WIX Filters partnership,” team owner Dennis Reinbold said. “Then the COVID-19 pandemic came about, and we were put on hold. With some of the COVID-19 restrictions being lifted now, we felt that running Sage and the WIX Filters Chevy at the GMR Grand Prix at the Speedway would fit our racing plans. It’s been seven years since we’ve competed in a road or street course or anything outside of the Indy oval. And the Indy 500 has been postponed until August now too. But we are very excited to come back to IMS for the Grand Prix.”

In addition to sponsorship, WIX is also set to be a technical partner for the team for both the road course event and 500-mile race at Indianapolis.

The GMR Grand Prix is set to get underway at noon on July 4. It will be the series’ second event of the season after its opener at Texas Motor Speedway.

Write off that car