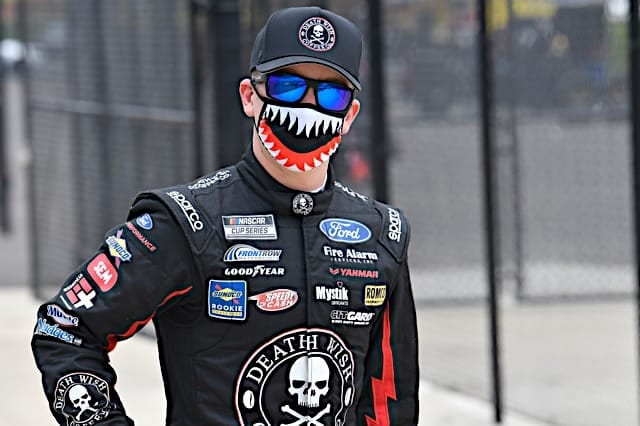 John Hunter Nemechek was not only the top underdog contender in Monday’s (June 22) rain delayed GEICO 500 at Talladega Superspeedway, he also very nearly walked away with the victory. Even being swept up in a crash as the field thundered towards the finish line didn’t stop him from crossing the stripe in eighth place.

Just in case you forgot, Nemechek is still a rookie. He also still drives for Front Row Motorsports, an underfunded operation in the world of big money stock car racing. Both of these facts are important to keep in mind because such a driver and team combination isn’t really expected to contend for a win.

Nemechek earned his second top-10 finish in the Cup Series in just his 16th start. The No. 38 team only has one finish outside of the top 25 this season.

After the race, Nemechek spoke of the finish and his chance to win, saying, “We had a really great run in our No. 38 Death Wish Coffee Ford Mustang today. I really thought we had a shot at it at the end there, but I’m still proud of our entire team’s efforts. When we fired off, we were kind of tight, and then we had that tire go down in the second stage, but we managed to come back from it and battled into the top 10 by the end. I wish we would have won that thing, but a P8 finish at Talladega is still good for us and I want to thank everyone on the team for their support.”

One of the most improved teams in the back half of the Cup Series garage over the past few seasons is the No. 13 Germain Racing group. At Talladega, Ty Dillon wound up 12th, continuing his recent success on superspeedways.

Some other notable underdogs in the top 20 were Corey LaJoie, finishing 16th and Michael McDowell, crossing the finish line in 18th.

As it often is at Talladega, the top positions in the Xfinity Series race on Saturday were occupied by several underdog participants. Brett Moffitt led the way with a fifth-place finish for first-year team Our Motorsports.

Joining Moffitt in the top 10 were Gray Gaulding and Alex Labbe, who finished eighth and ninth, respectively. Brandon Brown claimed the 11th spot, while two of the JD Motorsports drivers, Jesse Little and Jeffrey Earnhardt, finished 13th and 14th. Additionally, Tommy Joe Martins picked up his best result of 2020 in 15th.

NASCAR heads to Pocono Raceway this upcoming weekend, hosting four national touring races among the the top three series, including two for the Cup Series. For the Cup events, look for more out of Nemechek, as he ran well at Pocono in the Gander RV & Outdoors Truck Series and certainly has a hot hand. Front Row Motorsports already stole one trophy during a visit to Long Pond, Pa. in 2016, and will be looking for another one during the upcoming doubleheader.

As for the Xfinity Series teams, keep an eye on Labbe. Labbe is an adept road racer, and that often translates into success at the 2.5-mile track. Additionally, Labbe will be eligible for the Dash 4 Cash $100,000 bonus courtesy of his finish at Talladega. A check that big will be a huge source of motivation for both him and that team.

The truck race could be a big day for Jordan Anderson and Austin Wayne Self. Both drivers have run well in the past at Pocono, and with no Cup Series drivers on the entry list, it means fewer obstacles in their quest for a top-10 finish.

@ColinGarrettWeb @SamHunt22 We know it was a glitch. But you guys gotta like how that looked. pic.twitter.com/dnNniJEVzr

Not the finish we deserved yesterday by any stretch. But that’s Talladega. Really proud of the @JDMotorsports01 team for putting together a car that handled and sucked up extremely well. When it was go time we just got caught up in other people’s mess. P19 – lead lap. ??? pic.twitter.com/QI1mJUAXgO

Had a great race with our @RoofClaimUS Toyota! Ran top 15 most of the day, occasionally cracking the top 10 & felt like we were setting ourselves up for a good finish. Had some close misses throughout the day but unfortunately we got drilled from behind in the final crash. https://t.co/SgNdUfHjBI

.@bjmcleod78 going off, "you may be able to talk like that to the other guys but I'm not those other guys, you got a man in here…I got us lead lap with 40 to go, I want to represent you guys but I have 10 tons of pressure not to wreck this damn car"