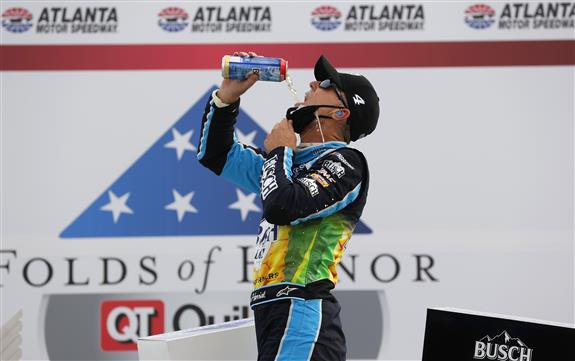 Who will be in the NASCAR Cup Series Playoffs?

As such, it’s about time to take a step back and look at what the playoff picture will be, before the dog days of summer truly begin with this weekend’s doubleheader at Pocono Raceway.  This preview assumes that all mentioned drivers can continue to meet the minimum requirements to stay playoff eligible.

The top eight drivers in points are the only drivers with wins, and they’ve created a 41-point lead on ninth.

The following drivers have clinched a spot in the playoffs by virtue of having multiple race wins:

A reminder that regular season points matter. So while these drivers have an incentive now to go for wins, winning the regular season championship nets the driver 15 playoff points, or three wins’ worth.

The following drivers will clinch as long as there are no more than eight more race winners, or if they win an additional race in addition to the one they have.

Now that the race winners are out of the way, the bubble drivers are the only drivers remaining. The following drivers are within 73 points, or a little over a full race with stage wins, from the cutoff spot, which makes up the rest of the top 16 and all the way to 21st in points:

While the first three drivers are relatively safe, the battle for the final cut-off spot is currently just one point between rookie Reddick and youngster Jones.

Conventionally, Reddick would be at a massive disadvantage in this battle; good rookies generally do better once they start visiting racetracks a second time in their rookie campaign. The schedule indicates that will not be the case, with the only repeat tracks prior to the playoffs probably being three doubleheader weekends and Daytona International Speedway at the end of August.

But Reddick has also gone far enough with those same conditions anyway. And his teammate Dillon would be up in that battle were it not for two DNFs in two of the past three races.

One driver that the field needs to watch out for is DiBenedetto. Last year, DiBenedetto’s results really started to turn in the corner in the summer; there’s no indication it won’t be the case again this year, especially with Wood Brothers Racing’s car supplier Team Penske having all three cars solidly in the playoffs. Byron, meanwhile, has shown speed but has been lacking in results.

There’s really not much of a chance of a wildcard winner anymore, barring a rainout happening any weekend. With the race at Sonoma Raceway being canceled this season and the race at Watkins Glen International being in serious jeopardy due to recent travel restrictions in New York, that last race at Daytona may be the only true wild card race of the last 13 races.

Outside of the bubble, there are two notable veterans who have competed in the nine races post-COVID break after receiving playoff waivers from NASCAR. Matt Kenseth has largely struggled in his surprise return to NASCAR, with just three top-20 finishes and two lead-lap finishes since his return.

The 2003 champion is 30th in points and is thus playoff eligible, but he has struggled compared to the rest of the field; only two drivers ahead of him in points have a worse average finish on the season. It’s hard to completely count out Kenseth, but it’s also hard to bet on the 48-year-old turning it around over the summer.

Ryan Newman, on the other hand, is more or less where he was prior to his Daytona 500 wreck. He hasn’t gotten a top 10 since, but he does have six top-20 finishes and his average finish is in the Dillon-Buescher range. Newman sits 25th in points on the heels of finishing 24th in his 666th career start at Talladega, remarkable considering he was fighting for his life in ICU just four months ago.

Ultimately, however, that consistency doesn’t mean much; while he’s shown more speed than Kenseth, he’s still 102 points off of the cutoff line of the playoffs, which isn’t an impossible gap to make up on consistency, but a win would take a lot of stress away from that team.

What’s going on in the world of COVID-19?

This week has led to some big developments on the coronavirus, with multiple states that NASCAR does business in having outbreaks or responding to outbreaks in ways that may effect the sanctioning body’s announced schedule.

Over the past 14 days, the state of North Carolina has had 1,000-plus new daily cases 11 times. This has prompted the state to finally put in place a mask mandate and has led New York state and others to implement travel restrictions on those who come from a state in North Carolina’s current situation.

The good news for NASCAR is that New York is open to coming to an agreement with MLB to waive it away from this requirement, but a baseball team isn’t comparable in the size and scope of hundreds of people from NASCAR descending onto the state, as would be the plan if the August race at Watkins Glen goes on as scheduled.

Texas, the site of a big NASCAR weekend next month, is in pretty bad shape right now. June 23-24 were two straight days of 5,000-plus new cases in the state amid reports that the hospital situation in certain parts of the state are about to be at a breaking point.

WWE and pro wrestling in general are sports in the sense of being athletic events with close contact between multiple people and having TV rights deals that allows them to run financially solvent events without fans. WWE has been the only sports organization, along with rival All Elite Wrestling (AEW), that has continued to run regular events, not testing their talent for COVID-19 and instead focusing on temperature checks. Last week, after a WWE developmental wrestler testing positive, WWE began to test its talent prior to every taping, which has now led to reports that multiple employees/contractors have tested positive from WWE’s testing.

As of this writing, NASCAR continues to not administer COVID-19 tests to at-track crew members, track staff or race officials. While they have an advantage that WWE does not, being all outdoor events with much more aggressive mask mandates/social distancing measures in place, the travel to and from different locations every week is a huge problem wrestling doesn’t have. NASCAR is going to need to address this sooner or later, especially considering just how many people in its industry live and work in an area with a large amount of community spread like North Carolina.

Will the double-header at Pocono Raceway be a success?

This weekend will mark the first official double header in NASCAR’s history since the modern era began, with two races on back-to-back days at Pocono.

The second Pocono race was reportedly moved to this weekend so that NBC would have less conflicts with its NASCAR coverage and its summer Olympics coverage. It actually has now turned into a big blessing for schedule makers, as that weekend was open from the start and allowed NASCAR to have a weekend to run the Cup Series at New Hampshire Motor Speedway.

Pocono is such a unique racetrack. The three corners at Pocono are all based off what was, at the time of its construction, turns from three of the oldest paved super speedways in the country. Turn 1 is based off of Trenton Speedway, a kidney-shaped track in New Jersey that closed in 1980. Turn 2, the tunnel turn, is based off Indianapolis Motor Speedway. The final and flattest turn at just six degrees of banking is based off of the Milwaukee Mile, which leads into the frontstretch of the track, which is slightly shorter than Talladega’s backstretch but feels longer as the drivers start off at a smaller speed entering it.

Pocono is such a mixed bag when it comes to who does well there. With how good Reddick has been this season, it actually wouldn’t be surprising to see him perform at Pocono. The adage used to be that Pocono was such a different beast, and with just Cup visiting it every year, rookies would be at a loss of how to get around. But Reddick has some experience at the triangle with track time in both the NASCAR Xfinity Series and NASCAR Gander RV & Outdoors Truck Series, and that adage falls apart after considering that Hamlin swept both Pocono races as a rookie.

So was there really a noose at Talladega?

Yes, there was a noose. The whole situation was a complete coincidence and a huge misunderstanding, especially considering this was the only noose style knot not just at Talladega, but also in all 29 NASCAR national touring series track garages which boast over 1600 garage stalls all told.

NASCAR just released a photo of the garage pull rope that was fashioned into a noose at Talladega. pic.twitter.com/gRAUAJoYv2

There really isn’t much else to the story at this point. NASCAR President Steve Phelps said in his teleconference following NASCAR’s internal investigation that he should have been more careful with his wording during the FBI’s investigation, but NASCAR’s actions were ultimately the right things to do, and there were much less of them then the average Facebook commentator thinks there were.

I 100% believe NASCAR in this situation, because NASCAR really doesn’t lie that much, believe it or not. It definitely pushes narratives (just tune into SiriusXM for an hour in the drive-home slot), but it either deals in opinion statements (“The racing has never been better”), statistics or polls. Sure, it manipulates the fan council polls, but it’s not outright lying about them; otherwise, why manipulate the polls to begin with?

Bubba Wallace is not Jussie Smollett. Smollett allegedly lied about a hate crime, while Wallace never lied about anything. A noose was found at his garage stall, per the FBI. Everybody in the industry and every fan should be happy it was a misunderstanding and not premeditated, because the alternative of there being a racist hate crime perpetrator at large in the garage is a significantly better outcome than Ann Coulter spewing word vomit about the situation on Twitter.

“Bubba” is guilty as sin because his whining on TV right after the poor ropes discovery, he went out in LOONYLAND and pled his case as a “victim”! He went out there super quick, I am surprised he doesn’t have whiplash. If he was so concerned about anything, a little proof on his part, some validation, some other sources, etc! Nope he went right to CNN (a bastion of truth, LOL) and other places. He played a part, a bad part…….so yeah he is guilty in my eyes, and the only diff I see is while “Bubba” didn’t “set up” (we are told) the drama he like Jussie, his victim status whining on TV sure as hell is identical to the clown in Chicago! “Bubba” has been around these people for years, and they he. Really? Really? Love the new photo being shopped around today by NASCAR, it seems. Shameless, everyone involved. I wonder if all the rope we have in our garage is now called a “noose”. Lordy how these people twist shit and double down, and the lemmings believe. Good gig I guess if you have no morals and wanna stoke the flames of hatred towards a class of peep!
Tis the “WOKE” thang to do!

The other drivers and sponsors who don’t because they disappear.