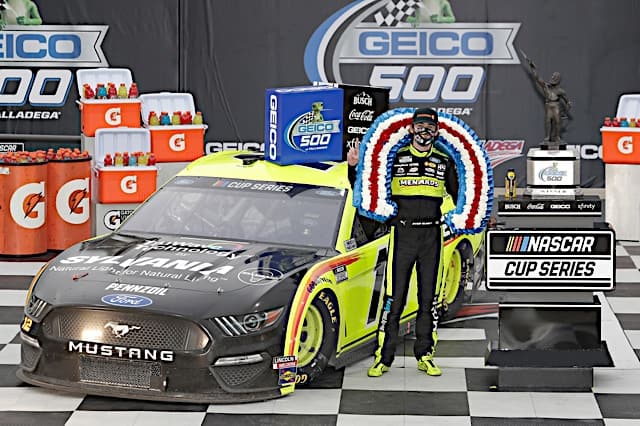 It’s another big weekend for our sport with a doubleheader scheduled for picturesque Pocono Raceway. This will be the first time in the modern era of NASCAR that a track has hosted back-to-back Cup races on consecutive days in keeping, perhaps, with this year of unprecedented change. We start out on Saturday with a 130-lap, 325-mile race and follow it up with a 140-lap, 350-mile affair on the Sunday. One thing that will be interesting to watch is how the results differ between the two events. Will one driver hit the perfect set up and dominate for two wins? Or will we see a good deal of variance? Adding to the mix is that the top 20 of the finishing field will be inverted for the start of the second race.

The weather, often an issue at Pocono, will be another crucial factor this weekend, with scattered thunderstorms in the advance forecast for both race days. The Joe Gibbs duo of Kyle Busch and Denny Hamlin won the races in 2019 at Pocono, with the driver of the No. 11 having the most wins at Pocono amongst active drivers with five. Here’s hoping the weather holds up and we have two great races this weekend.

With his Penske teammates already at two apiece in the win column, it was about time Ryan Blaney broke through in 2020 to secure his first win of the season – and his fourth career victory in 162 races. In the last seven races, he’s finished third, third, 40th, fourth, second, third and of course has the win at Talladega last Sunday. Pretty impressive numbers for Blaney for sure, and with seven top fives under his belt already, it seems safe to say that he’ll eclipse his season-best total of 11 top-fives – perhaps even before the playoffs begin. I saw a Reddit thread after Blaney’s victory which noted that, at this age (26), he already has more career victories than Jimmie Johnson, David Pearson, Cale Yarborough, Dale Earnhardt, Bobby Allison, Darrell Waltrip, Kyle Busch, Kevin Harvick, Denny Hamlin, and Matt Kenseth – an august list if ever there was one. Now this certainly sounds impressive, but the difference here is in the number of races run. Blaney has the aforementioned 162 starts with the next closest being Cale Yarborough (60 races). Clearly the partnership with new crew chief Todd Gordon is paying dividends, though, as Blaney has been fast every week. He could very well be a big factor in the playoffs if he continues his current torrid pace.

With 13 races in the books, we’re already halfway through the regular season of certainly the most unusual year in NASCAR’s long history. I also wondered where we should have been had the world not been turned upside with COVID-19, if the season progressed as expected. By my count, we would have just finished race 17 at Chicagoland Speedway this past weekend. Looking back at the original schedule seems so odd now, I have to say. So, at the halfway mark, what are we seeing? Well for one, a return to form for Hendrick Motorsports with Chase Elliott and Alex Bowman particularly fast. Team Penske looks strong, winning five of 13 events, and while Kyle Busch hasn’t won yet, you know those wins are coming – likely in a bunch. Busch’s JGR teammates Denny Hamlin (3 wins) and Martin Truex Jr. (1 win) will also be factors come the post season, but perhaps the one to watch might just be Kevin Harvick, who has a series best average finish of 8.2. All told, it’s setting up nicely for the run to the post season.

I didn’t write last week, which meant I haven’t had a chance to mourn what would have been the race weekend for my local track of Sonoma Raceway. Over the past six years since I moved to the West Coast, I’ve really enjoyed my experiences at the track both for NASCAR and formerly IndyCar and it’s my favorite (personal) weekend of the year – just don’t tell my better half, okay? In the last three years, I’ve had official photographer duties for Frontstretch, which means I’m at the track for the practice and qualification sessions as well as the race itself, and it’s a radically different race experience than you would get just sitting in the stands. Here’s hoping Sonoma is back on the schedule as usual in 2021 because goodness knows I’ve missed it this year.

I can’t imagine what life must have been like for Bubba Wallace of late, so I want to close out this week with a simple and clear message: #IStandWithBubbaWallace

Shame they can’t race at Sonoma this year. Always enjoy the road courses.
Please no rain this weekend but it appears to be in the forecast yet again.