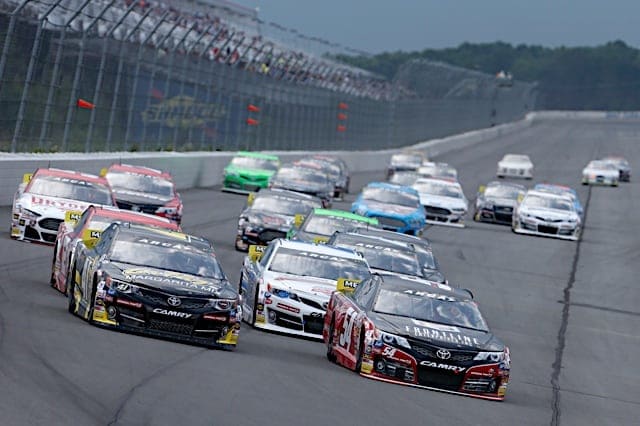 On Friday afternoon (June 26), the ARCA Menards Series will hit the “Tricky Triangle” for the 67th time. The series will kick off the big weekend at Pocono with the General Tire #ANYWHEREISPOSSIBLE 200, where last season, Ty Majeski earned the victory in the first event while Christian Eckes used his victory in the second event to lead him to the ARCA Menards Series championship.

Before we dive into what to expect at Pocono, let’s fill you in on what happened last weekend at Talladega Superspeedway. Drew Dollar continued Venturini Motorsports’ streak of victories this season last weekend at Talladega. Much like Team Penske did on Monday (June 22), Venturini held the pack in check Saturday afternoon. Three of its drivers spent a majority of the race up front with Ryan Repko and Michael Self following Dollar. Other standouts include Bret Holmes, who came very close to earning his first career victory in his backyard. Riley Herbst led 40 laps, the only other driver to lead the race. The biggest moment of the event was the greatest save in recent ARCA history. Herbst and Self made contact, sending Self around sideways. Self kept on the gas sliding sideways and managed to keep his car pointed in the right direction; he’d finish fifth.

Self continues to lead the way in the points standings. He leads by 11 points over Talladega winner Dollar. Hailie Deegan sits third, Holmes holds the fourth position and Thad Moffitt rounds out the top-five with a 27-point margin. Self, Deegan, Holmes and Moffitt all have experience at Pocono Raceway while Dollar will make his Tricky Triangle debut.

Since 2010, there have been 20 different winners in 20 races at Pocono Raceway. None of the previous winners are entered in Friday’s event, meaning one driver will make it 21 different winners. Of all manufacturers, Chevrolet has the most victories at Pocono with eight, with the last Chevrolet victory coming in 2017 with Justin Haley. Toyota has six victories since 2010 and Ford has five.

Majeski earned the victory in the second event last season and in his place on Friday with Chad Bryant Racing will be New Smyrna race standout, Derek Griffith. Griffith put the No. 2 Ford Fusion on the pole in his first start and threatened for the victory but came up short of Sam Mayer. Griffith will have sponsorship support from Original Gourmet Lollipops as he makes his first career ARCA superspeedway start.

“I’m excited to get to Pocono on Friday,” said Griffith. “It’s going to be a big challenge as it will be the largest track that I’ve ever competed on, but I feel like I’m heading there with one of the best teams in the garage. It’s going to take a few laps to get comfortable, but I think with some confidence in myself and the leadership of the Chad (Bryant) and Paul (Andrews, crew chief) we can turn some heads.”

On his 17th birthday, Sam Mayer will return to action in the No. 21 for GMS Racing. The year started off hot for Mayer winning at New Smyrna Speedway and at the Bullring at Las Vegas Motor Speedway, the respective season openers for the ARCA Menards Series East and ARCA Menards Series West. COVID-19 forced him to pause, but his momentum stayed extra hot as he finished second at Toledo Speedway in the East’s second event of 2020. Friday will be his first start on an ARCA superspeedway.

Ty Gibbs was the driver who defeated Mayer at Toledo, and on Friday the two will go at it again as Gibbs makes his debut at a track where his grandfather has seen much success. Joe Gibbs Racing has earned 14 career NASCAR Cup Series victories, one NASCAR Xfinity Series victory and one ARCA victory at Pocono. Friday, Gibbs will also make his superspeedway debut and look to add his name to the Joe Gibbs Racing legacy at Pocono.

Venturini Motorsports isn’t messing around this weekend either with three strong entries. Dollar and Self will look to continue their season successes while Chandler Smith will look to go 2-for-2 in 2020. Smith will make his second start of the ARCA season. The last time Smith was in the field, he earned the victory at Phoenix Raceway. In his Pocono debut last season, Smith finished eighth. Of the Venturini drivers, Self has the most success at Pocono with two career third-place finishes. The trio of Venturini drivers will certainly be one to keep an eye on this Friday.

“I’m looking forward to carrying the momentum we have from winning at Talladega Superspeedway into Pocono Raceway this weekend,” said Dollar. “We’ll have limited practice, and I’ve never been to Pocono before, but I’m confident that I will be able to quickly get up to speed. I know my Venturini Motorsports Toyota Camry is going to be really good, and I can’t wait to get back to the track.”

With this lineup, Venturini Motorsports will look to remain undefeated this season as Self won at Daytona International Speedway, Smith won at Phoenix, and Dollar won at Talladega.

Deegan returns to the site of her superspeedway debut hot off the trail of three straight top-10 finishes. She finished seventh at Pocono in 2019, and in nine starts has only finished outside the top 10 twice. Deegan will look to continue her streak as, for the first time in her ARCA career, she returns to a racetrack she’s been to once before. Deegan is one not to overlook Friday as she looks to move closer to the points lead.

“Pocono is a fun track,” said Deegan. “It’s really hard to get your car set up and good for every single corner. I think going there with DGR-Crosley, with all the guys working hard here, that I’m going to come with a good setup. I’ve been on the simulator a lot and getting a lot of practice. I’ve been trying a lot of different stuff seeing what I’m comfortable with and seeing what we want to baseline with since we’re not getting much time on the track. It’s going to be fun.”

“I have been frustrated with our results in the last few truck races,” said Gray. “I know finishing 11th and 12th isn’t that bad, but it’s frustrating when I know I can do better. Not being able to practice has definitely hindered our performance. That’s a big part of why I’m running the ARCA race on Friday. I’ve never raced at Pocono before, so any amount of experience I can get there will be a bonus and help us on Saturday. It looks like a really fun track and I’ve watched a lot of film of last year’s race. It goes so fast, so you have to be good from the start. There isn’t a lot of time to feel it out and think about adjustments. Without being able to qualify, if you start mid-pack you have to get up front as soon as you can and be able to stay there since 60 laps goes by fast.”

Entry List for the General Tire #ANYWHEREISPOSSIBLE 200 at Pocono

The General Tire #ANYWHEREISPOSSIBLE 200 will run on Friday, June 26th at 6 p.m. ET on FOX Sports 1.

Let’s hope the broadcasting crew will get Katie Osbourne name right, instead of Katie Holmes. Even Phil A didn’t catch that on his Critique of last weeks ARCA race.