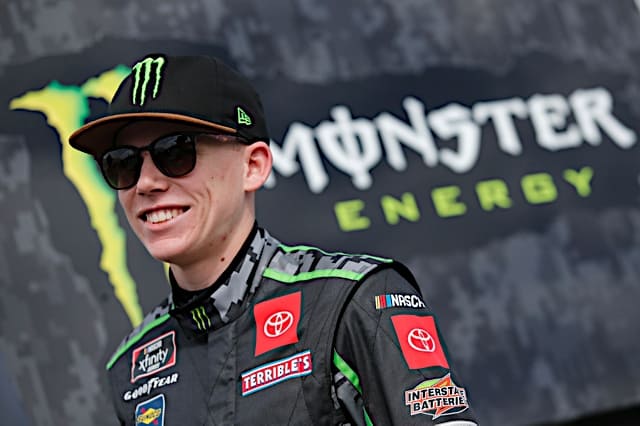 With a crop of young but relatively inexperienced talent filling Joe Gibbs Racing’s NASCAR Xfinity Series program in 2020, expectations were limited. Collectively, each of the three drivers put those expectations to the side, including Riley Herbst, who made the jump to full-time competition in 2020.

Herbst has spent the majority of the past three years in ARCA, running 47 of 60 races. His lone win came at Pocono Raceway in his rookie season (2017), during which he rattled off five additional top-five finishes.

Since that June afternoon, Herbst has been consistent, leading 346 laps in 49 total starts (including 36 last weekend at Talladega Superspeedway). But the California native has yet to find victory lane again, leading to speculation of his move, essentially two rungs up the ladder, to Xfinity.

“The competition is way harder,” Herbst told Frontstretch of running full-time in Xfinity. “I’m just looking forward to the opportunity of going out there and trying to win. The competition is stiff, the cars drive a little similar [to ARCA]. […] I’m going to have to take that learning step.”

Herbst made 10 Xfinity starts between 2018 and 2019 for JGR, preparing him for what was to come in 2020. Of those starts, he had just four top-10 efforts, recording a best of sixth in his series debut at Iowa Speedway in June 2018.

And though he only made seven Gander RV & Outdoors Truck Series starts for Kyle Busch Motorsports in that same time frame, the move to Xfinity, he believes, was the right one.

“I can sit [in ARCA] and try to get more trophies and things like that because the results haven’t been up to my standard, but there’s a time to move on,” Herbst said. “I feel like it was kind of weird to walk into the ARCA garage [originally at Daytona] because I was the elder man.”

Plain and simple: Herbst expected more in his time where ARCA was his primary focus. His best year in the championship standings came in his sophomore season, finishing third.

By only making eight starts in 2019 (he shared the No. 18 car with Ty Gibbs), Herbst had a different mindset, believing he had something to prove. Despite picking up a pair of runner-up finishes at Talladega Superspeedway and Pocono, racing wasn’t fun for the driver anymore.

For that reason, Herbst feels he only needs to validate his own satisfaction when it comes to results on the racetrack this season in Xfinity.

“Last year, I feel like I was on a something-to-prove statement, and it didn’t pan out,” Herbst continued. “I didn’t get the results I wanted, and I wasn’t having fun at the racetrack. […] I was putting too much pressure on myself, making the stage too big for what it was. It just wasn’t good, and I think it hindered some of my results.

“I’ve already proved it to myself that I deserve to be here and that I want to be here, and I’m capable of being here, so I’m just going to go and have fun, smile at the racetrack and the results will come.”

Herbst has five top-10 finishes, including a runner-up result to fellow JGR rookie teammate Harrison Burton at Auto Club Speedway in late February. The following weekend at Phoenix Raceway, the third driver in the trio of teammates – Brandon Jones – was victorious.

Following that runner-up finish, Herbst had a message to people who believe he doesn’t deserve the opportunity to drive the winningest car in the series over the past 15 years.

“Keep on talking, because we’re coming for more wins this year, for sure,” Herbst told FOX Sports following his second-place result.

Herbst is aware that people are indifferent about him driving the No. 18 car. But quite frankly, he couldn’t care less, believing in his own talent.

“Everybody’s got an opinion, and I respect everybody’s opinion, but I’m here,” he added. “Joe Gibbs Racing is a great organization, and Joe is a very smart man. He wouldn’t have put me in this opportunity if he wanted me to go out and embarrass him or the [No.] 18 car. I take that with great honor and [am] just going to go out there and try to get Joe Gibbs Racing some good finishes and let the rest speak for itself.

“I’ve read everything there is to read about how Joe Gibbs Racing is going to go from however many wins Christopher [Bell] got over the past few years to zero because me, Brandon and Harrison can’t do it.

“There’s also the opinions that we’re going to do just fine. I would like to think we’re going to go out there and win races, but I also like being realistic too, and I’m a young driver and most of the tracks we’re going to I’ve never been to before. I’ve got to learn my way as well.”

Scrolling through his Twitter timeline, Herbst doesn’t find motivation in proving the doubters wrong. He would rather just do it on the racetrack, similar to his performance at Fontana.

“I don’t need any motivation,” Herbst stated. “I’m in the [No.] 18 car, that’s the most anybody can ask for. It’s the winningest car in the Xfinity Series over the past few years, so what more motivation do you need? Coach has given me all the tools I need to go out there and win races, so it kind of takes the pressure off of me if you look at it from a different angle because it’s on me now.”

In the opening third of the season, his two JGR teammates have shown out. With Herbst’s track record at Pocono in ARCA, this upcoming weekend could be a pivotal moment in his rookie season.

Umm…. isn’t his Grampa a billionaire?