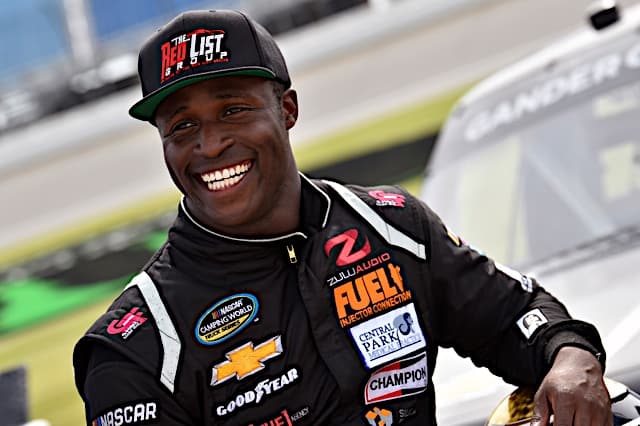 While Bubba Wallace has been the leader of NASCAR’s improved stance on social injustice movement in the United States, Jesse Iwuji, the lone other African American driver in the top three national touring series, hasn’t competed in the Gander RV & Outdoors Series since May 26 at Charlotte Motor Speedway.

After all, Iwuji has only competed in eight Truck races, including his debut in 2018 at Canadian Tire Motorsport Park.

His debut coming on a road course is surprising. Why? Iwuji doesn’t have a racing background, instead focusing on football while attending the United States Naval Academy. But just before Iwuji set his mind to racing, he said he’d take his personal cars to a drag strip or road course.

Fast forward five years into his racing career. Now at 32 years old, Iwuji has seen the ins and out of NASCAR, going from late models to the K&N Series, sporadically running ARCA Menards Series races before Trucks. One of the things holding the Texan back: sponsorship.

Based on injustice issues African Americans have faced throughout the history of the United States, one would think perhaps that applies to finding sponsorship in NASCAR. Remember, only two African American drivers in history have reached the Cup level.

But Iwuji isn’t sure he sees it that way.

“I don’t think it’s hurt me at all being African American as far as acquiring sponsorship,” Iwuji recently told Frontstretch. “Maybe it has, I don’t know. I’ve been able to acquire sponsorship. To the level that I need it, not really, but I’ve been able to get some. That shows that it’s definitely possible.

“I think being African American, being in the military, that definitely makes me different from all the other drivers. If we’re out here and we’re all competing for the same watering hole, you’ve got to have something that makes you different. … At the end of the day, you’ve just got to keep grinding until you find the ones that do want to jump on board.”

Unfortunately for Iwuji, gaining the sponsorship he needs hasn’t happened. Wallace has faced similar issues throughout his racing career, starting in the Truck Series with Kyle Busch Motorsports before moving to Roush Fenway Racing in the Xfinity Series, where, in 2017, his No. 6 team had to shutdown due to a lack of funding. Since moving to Cup full time in 2018, Wallace has been outspoken about Richard Petty Motorsports not having enough funding to be as competitive as possible.

Regardless, Iwuji admitted funding is what’s holding him back from running an entire season in any series.

“Funding is definitely the limiting factor holding me back, running full seasons, having enough funding to run in the competitive equipment you need to try to run up front, that’s the biggest piece,” he said. “Once I have that, I can put myself in a better position to do better.”

As for NASCAR’s recent improvement in its social justice stance, Iwuji said he is pleased, hoping drivers, teams and the entire sport continues to stand with Wallace. The sighting of the sport being unified as one on Monday (June 22) at Talladega Superspeedway, was “cool” for Iwuji to see.

“NASCAR and the sanctioning body, I think they’ve done a really good job of handling everything,” Iwuji said. “They’ve been really quick and swift to take action on everything. It hasn’t been like, ‘OK, we’ll think about it for a while.’ When Bubba Wallace said, ‘We need to get Confederate flags out of here,’ the next day NASCAR is like, ‘They’re out.’

“They are doing everything they can. If they see something that can be deemed as racism or racist at all, they’re taking it out and removing it — people, flags, whatever.”

Iwuji admitted he doesn’t have much of a relationship with Wallace; he said he doesn’t even have his phone number. And just like Wallace, he has been receiving more hate than any person could possibly imagine on social media. Iwuji sees it, too. However, it’s likely nothing compared to what Wallace sees on a daily basis.

“I haven’t really experienced a ton of racism, but I have seen stuff online and on social media – I have had stuff directed my way,” Iwuji said. “Nothing to my face in real life, just on social media. I would say every year at least once or twice, someone will make some little meme that they think is funny and it’s usually super racist. When I say super racist – the most recent one happened a few weeks ago. Basically someone had my picture and they wrote a meme and the meme said, ‘What a stupid n-word.’ That was it, big bold letters, can’t mistake it. It’s really, really sad.

“Recently, with everything that’s been going on, I’ve been getting more and more direct messages from people who are just super racist. They’ve really been showing their colors. Just before this call, I got a message, and someone said – I’m going to read it out to you: ‘Bubba put the noose in his garage, dumbass.'”

Iwuji said he’s seen other where people have called him a “complete idiot” because he supports NASCAR. But he has a direct message to those people that send him racist messages.

“At the end of the day, people that are sending this stuff, they’re nobodies,” he said. “They don’t have a real life, they’re losers, they’re never going to go anywhere in life, they’re going to consume themselves in their own negativity, and that’s fine. I know I’m going places, I’ve been places and I will continue to go up in life, so I can’t even get upset with people like this. All I can do is expose them so the world knows who they are and where they’re at, and I let the world handle them.”

The way Iwuji stays away from the negativity is staying “laser-beam focused.” On top of focusing on a racing career, he’s started a couple of small business, including The Red List Group LLC and JBJE Transportation.

Iwuji said, though, that since he’s been a part of the NASCAR community, none of his competitors have been racist toward him.

“I haven’t had any incident like that where a fellow competitor called me that, not to my face,” Iwuji said. “I’m not the smallest guy in the world, also. I’m not the skinniest guy in the world, I’m obviously an ex-football player and I’ve actually gotten a little bit bigger muscle-wise since when I played football. So if someone did say it to my face, bless their heart, bless their soul.

Moving forward, he said he’s hoping NASCAR continues to be inclusive to all walks of life. An idea he has involves the sport giving away tickets to minority groups so they can experience the roar of 750 horsepower once fans are allowed back to the track in full capacity.

“I want to see [NASCAR] continue to bring other backgrounds to the track,” he said. “Get free tickets to inner-city communities that may the majority black, Mexican or whatever. Bring them to the track. Give them a free opportunity to come to the track and try. I don’t know if they could give 100, 500 tickets, but bring them and let them get exposed to it and when you get exposed to it, they’re going to like it. They’re going to want to come back on their own dime the next time.”

Iwuji will make his ninth start in the Truck Series on Saturday (June 27), running the No. 33 for Reaume Brothers Racing at Pocono Raceway.

Jesse is an intelligent class act. He has character and integrity. I hope hie gets more opportunities in the near future. I don’t have the same compliments for Wallace. In fact there is no comparison.

It’s not going to help him get to Cup any time soon.