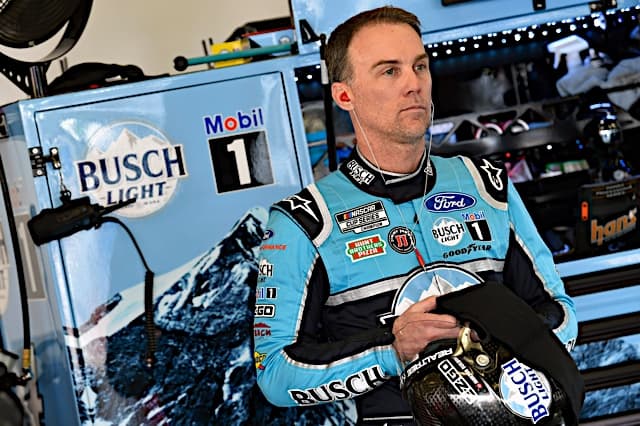 NASCAR loved Pocono Raceway so much that they decided to have a Cup Series double-feature at the triangular-shaped track. The Pocono Organics 325 is set to run on Saturday, June 27 at 3:30 p.m. ET and will air on FOX. Sunday’s race, the Pocono 350, will air at 4 p.m. ET on Fox Sports 1.

Note: Drivers and DraftKings prices in this article are for Saturday only, but you may use some of the information for Sunday’s race as well.

As usual, there won’t be any practices or qualifying for these races. NASCAR is trying to slow the spread of the coronavirus by ensuring only necessary personnel are on-site. In fact, Saturday’s starting lineup has already been announced. Aric Almirola drew the pole and will start alongside fellow Ford driver Ryan Blaney. Sunday’s lineup will be based on how drivers finish on Saturday. The top 20 finishers will invert, while 21st on back will keep their position.

Since this weekend’s events are at a completely different type of track than last week, the strategy will be different as well. The 2.5-mile Tricky Triangle has three unique corners and contrasting straightaways, each with its own length.

In previous Pocono events, a winning DraftKings lineup featured one or two lap leaders, the first-place driver and some lower-priced drivers who finished better than where they began. However, there are less laps in this weekend’s races — 130 on Saturday and 140 on Sunday. You’ll probably still take a similar approach as before, but just remember that you’ll get more points for those who gain a lot of positions on the track.

Before I move on to this week’s picks, let’s go over what happened last Sunday at Talladega Superspeedway.

Almirola, who ended in third, and Brendan Gaughan provided great value to the total score. While it wasn’t a high-scoring lineup, it did cash the $1 double up. Additionally, it won $1.50 in the $1 Happy Hour contest.

Harvick nearly won the GEICO 500 last Sunday, but unfortunately ran out of gas in the closing laps and settled for 10th. He still has two wins so far this season, including the first race back from the break and then the Folds of Honor QuikTrip 500 at Atlanta Motor Speedway. He also leads the points standings after 13 races and has more top 10s than any other driver.

Not only has Harvick been good this year, but he’s also performed well at Pocono. The No. 4 Stewart-Haas Racing pilot has seven top fives and nine top 10s in the past 11 races there. In addition, he’s led 181 laps in the last four events — 62 of which came last July. Harvick starts ninth Saturday but could still get to the lead if he has a clean race.

If you wish, you may go down to Brad Keselowski; he has similar track stats as Harvick.

Busch has somehow figured out this track since the July 2016 event, as he’s had results of ninth place or better since. Additionally, the No. 18 Joe Gibbs Racing driver led 375 circuits in that span. Oh, did I mention, Busch also has three wins in the past five races?

Even though Busch has yet to win this year, he still has six top fives and seven top 10s thus far. He also has three runner-up finishes, the last one occurring at Atlanta earlier this month. Busch is certainly a favorite to win this weekend, but if he doesn’t, look for him to still finish near the front.

I don’t play Byron often in DFS, but when I do it’s for good reason. The No. 24 Hendrick Motorsports pilot may have competed in only four events at the Tricky Triangle, but he knows how to get to the front by the end of the race. In 2018, he started 38th and ended sixth; a year later he began 31st and ended up fourth. This time he’s starting 16th, but he should still have a good result.

Although Byron has endured a rough season, he seems to have turned things around since Bristol Motor Speedway where he crossed the line in eighth place after starting 13th. He earned another eighth at Martinsville Speedway and followed that up with a ninth at Homestead-Miami Speedway. These results helped him get close to 50 DraftKings points.

Hopefully, Byron will continue his top 10 streak at this big track.

This will be Reddick’s first Cup event at Pocono, but he did finish second in the Xfinity race last season. He also earned a ninth place in 2018. While those results are admirable, I want to take note of how last year’s No. 8 Richard Childress Racing driver performed. Daniel Hemric gained 10 positions in both races last season and earned a top 10 in the second race. Reddick is in the same car and could have a similar result, though he’s starting 15th Saturday.

I’m not sure why Jones is so inexpensive. He’s only had one finish outside the top 10 at Pocono, which came last year, using a similar package as this year,when he crossed the line third and second in each event. All four JGR Toyotas have been quick (and dominant) there recently, and Jones is no exception. He could use a good finish since he only has five top 10s this season. Maybe he could continue the momentum he gained from Talladega into Saturday’s race.

Custer is here due to his low price and potential. While his lone Cup start was with Rick Ware Racing, he did stay on the lead lap and completed the race 26th. However, it’s his Xfinity stats that you should notice. The No. 41 SHR driver won from the pole last year after leading 58 laps. He’s also led an additional 37 laps in the two events prior to that dominant victory.

Unfortunately, Custer has concluded the past three races outside the top 20 this season. He starts 25th on Saturday, though, so he could potentially get a top 20. If he does, that would be a nice value score on DraftKings. Don’t be afraid to put the young rookie in your roster.

By the way, Chris Buescher has a few races where he’s finished better than he starts. He’ll begin one position ahead of Custer and could easily earn a top 20.