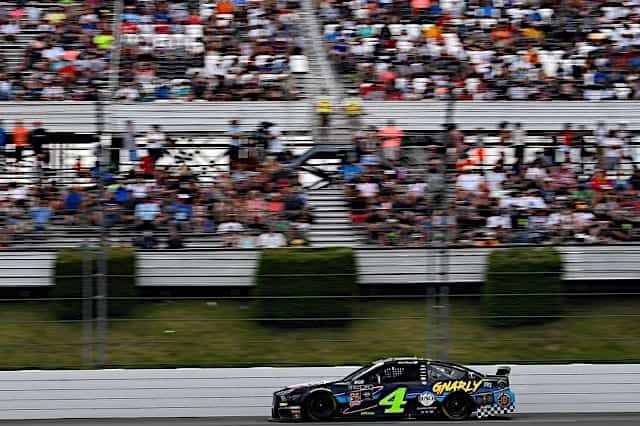 Pocono Raceway is a unique racetrack.

The two-and-a-half-mile triangle has a weird Frankenstein-esque layout. While the track is fairly flat in its three turns, those three turns are all slightly different, and all three are based on the turns at different racetracks. Turn one is based off turns at the old Trenton Speedway, a now-defunct oval in New Jersey that had a distinct kidney shape, with a kink in the backstretch.

Turn two is homage to Indianapolis Motor Speedway, while turn three is replicates the Milwaukee Mile, which was in active operations for over 115 years.  Ironically, Milwaukee’s annual open-wheel race was traditionally the first major event race following the Indianapolis 500. Whether the turn construction was a reference by the Matolli family or a coincidence is unknown.

This will be the first NASCAR weekend in nearly 50 years where there are two Cup races. This practice was a tradition in the 1950s, where multiple Cup races in a day were fairly common, usually on one of the coasts. But outside of qualifying races, it’s a rare sight in NASCAR’s history to have back-to-back points races at one facility in one series on the same weekend.

Also, with only 0.1 points awarded for each lap led by a driver, the need for a dominator is less important when building a winning lineup. Both races this weekend will have a total of around 13.5 points per-race up for grabs in this category. Take note when building your roster and focus on mid-pack competitors who can climb up toward the front on race day.

Harvick, strangely, has never won at Pocono. Instead, Harvick has built a consistent record at the Pennsylvania triangle. Seven of Harvick’s top-five finishes have come in the past 11 Pocono races, with four of those finishes being runner-up finishes.

The points leader enters the back-half of the regular season in great shape. As statistically excellent as Harvick’s seasons were in 2015 and 2018, his average finish of 8.2 is actually slightly better than either season. Outside of a 26th place blemish at Homestead-Miami Speedway, Harvick has not finished outside of the top 15 this entire season.

Pocono is a very off-the-wall track for Truex. Sometimes he does well and wins; sometimes he has an engine failure and finishes 35th, like what happened to him last year.

Bowman doesn’t have a fantastic record at Pocono, but it seems like the No. 88 team is going to heat up. Bowman finished sixth at Martinsville and followed it up this past weekend with a seventh at Talladega.

Bowman is eighth in points and is solidly in the playoffs, courtesy of his win at Auto Club Speedway earlier in the season. But he’s in a no-mans-land right now, better than the drivers before him but also a tier below Harvick and Denny Hamlin in the series. If Bowman is going to rise and truly contend for a championship instead of being a second round elimination, he has to start becoming more consistently competitive at non-intermediate tracks. And Pocono really isn’t an intermediate track.

Reddick has never run a Cup race at Pocono before, but he does have two top-three finishes there in five races in the NASCAR Xfinity Series/NASCAR Gander Outdoors Truck Series.

This rookie kind of reminds me of Hamlin, in that he has gotten way more out of his car than any recent driver had before him. And Hamlin was able to sweep both Pocono races as a rookie. Not saying to expect Reddick to win even one of these races, but as bizarre as Pocono is as a track, it shows that even somebody with no track experience like Hamlin can figure a way around the racetrack.

Okay, this is the Hail Mary to end all Hail Mary’s. The Australian will have never turned a lap in a Cup car before the engines fire for Saturday’s race. Davison has, however, driven a stock car; a handful of NXS starts over the past five years ensures that Davison won’t be completely out to lunch this weekend.

Davison comes from a primarily road course racing background. That could play into his hands at Pocono; while not all road course aces excel at the triangle, enough do so to where Davison may surprise this weekend. Davison has also competed in multiple Indianapolis 500’s, which is the most similar oval to Pocono in the world.  Finally, with Pocono’s length and how short both races will be this weekend, Davison should be able to stay on the lead lap, keeping him in position for the lap completion bonus and a chance at steal some positions in the closing laps if there is a late-race caution.