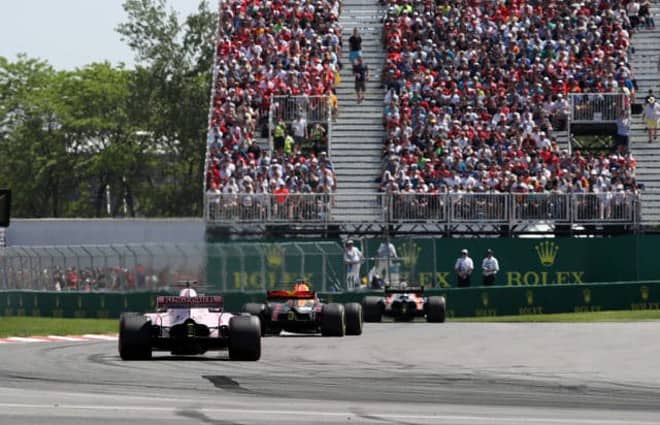 It appears that Canadian F1 fans might get a little more to celebrate than just Thanksgiving this fall.

According to a rumour from the French language magazine Pole Position, the previously postponed Canadian Grand Prix might be rescheduled for October. The magazine claims that an “unidentified, yet reliable European Source” told them that the Grand Prix will now be held on October 9, 10 & 11 with the Nissan Micra Cup and the Canadian Formula 1600 Series acting as the support for the weekend.

The race which was originally scheduled to be run in July is traditionally held at the Circuit Gilles Villeneuve on the Ile Notre Dame, a man-made island in Montreal, Quebec.

These rumours that are making a race look promising have come on the heels that an announcement is allegedly coming from Formula One on July 5. However, when various outlets have reached out to the track promotors, none have been able to receive a comment on the matter.

One thing that could potentially derail this proposal is the Government of Canada’s reluctance to open their borders up in the face of the COVID19 pandemic. As Canadian Prime Minister Justin Trudeau said June 22nd that the country is looking to avoid a potential second wave of the virus. With over 8,500 recorded deaths in Canada and nearly 5,500 of them coming from Quebec alone, the concern of F1 teams entering the country with hundreds of employees and personnel could prove to be too much.

The country has also closed its border with the United States to all non-essential travel until at least July 21.

Another thorn in the side of the plan is the weather itself. As reported on by Autoweek, the average temperature in October is around 48 degrees Fahrenheit, which is substantially cold when considering most F1 events are run in warm climates and weather. Although snow usually doesn’t hit until November, a popup snow squall around Thanksgiving is not out of the question.

The Canadian Grand Prix serves as a chance for two F1 drivers to race on their home soil. As of the 2020 season, Montreal-native Lance Stroll will be joined on the grid by Williams driver and fellow Montrealer Nicholas Latifi. While Stroll has three starts at Montreal, with a best finish of ninth, Latifi has yet to turn laps on the historic track in an F1 car.

Regardless of the problems that may face the promoters, Canadian F1 fans will have their eyes glues to social media come July 5 to see if, in fact, they will get a race in their home and native land.

The currently revised 2020 F1 season will kick off with the Austrian Grand Prix July 3-5, kicking off the first of 8 scheduled races.

Six-time F1 World Champion Lewis Hamilton announced on June 21 that he will be creating a new commission aimed to help increase diversity in motorsports.

Hamilton’s commission aims to help use motorsports as a way to get more Black young people from backgrounds involved in things like mathematics, engineering as well as science and technology with the ultimate goal of getting these kids ready to work in Formula One one day.

“I’ve been fighting the stigma of racism throughout my racing career — from kids throwing things at me while karting, to being taunted by fans in blackface at a 2007 grand prix, one of my first Formula One races,” he wrote in the British newspaper The Sunday Times.

“I’m used to being one of very few people of colour on my teams and, more than that, I’m used to the idea that no one will speak up for me when I face racism, because no one personally feels or understands my experience.”

Hamilton’s initiative looks like it could be a game-changer for years to come.

Williams F1 has been down in the dumps these past few seasons. After saying goodbye to long-time sponsor Martini as the end of the 2017 season, the British outlet was dealt another blow when just yesterday it was announced that former title sponsor Rokit phones inked a deal with Mercedes.

On June 25th, Williams unveiled their new sleek While, blue and black livery sporting the sponsors Sofina, Lavazza & Acronis in place of Rokit.

Former F1 chief Bernie Ecclestone has recently has come under fire due to his racist remarks during an interview on June 26 with CNN.

Ecclestone, who was removed from his position by Liberty Media in 2017, said during the interview that, “In lots of cases, Black people are more racist than what White people are.” Ecclestone’s statement was said in response when asked about Lewis Hamilton’s diversity commission, and was immediately condemned by both the media and F1.

Formula One’s official statement read, “At a time when unity is needed to tackle racism and inequality, we completely disagree with Bernie Ecclestone’s comments that have no place in Formula 1 or society.”

Ecclestone is no stranger to controversy, having once stating that he admired Hitler’s abilities as a leader.

Alex has been writing in the motorsport world since he was 19. Starting his career with the NASCAR Pinty's Series, Alex's work has been featured in Inside Track Magazine, TSN & NBC Sports as well as countless race programs. Alex has also worked within the junior hockey world in Canada, appearing as a desk host for the OHL's Barrie Colts. He also got the opportunity to cover the 2018 Chevy Silverado 250 which appeared as the headlining article on NASCAR.com.
@@alexgallacher95
Previous Sebastien Bourdais 2020 IndyCar Season Preview
Next Ty Gibbs Nabs 3rd ARCA Menards Series Win at Pocono