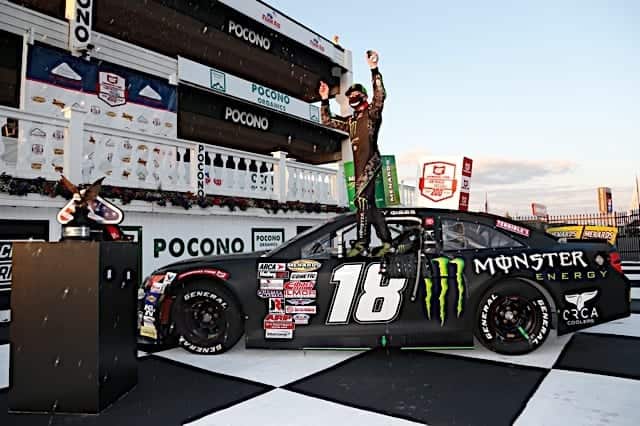 “That was awesome man!” Ty Gibbs exclaimed as he climbed jubilantly out of his winning No. 18 Joe Gibbs Racing Toyota. For the third time in 13 career ARCA Menards Series starts, Gibbs won, this time at Pocono Raceway. He dominated the 2020 General Tire #AnywhereIsPossible200 on Friday, June 26, the first of five races in three days at the 2.5-mile track.

Gibbs ran a flawless race, leading 65 of the 80 laps at The Tricky Triangle.

“It feels good to be back in victory lane at Pocono,” Gibbs told Fox Sports 1 after winning the race. “It sucked to see Riley (Herbst) get wrecked last race and we came back here and won. It’s good revenge. This is a dream come true. I’ve come to this track when I was a kid and now I’ve come here and won. It feels good – I love these guys, I can’t thank them enough.”

The 17-year-old grandson of NASCAR Hall of Famer Joe Gibbs has celebrated two wins since ARCA returned after its hiatus due to the COVID-19 pandemic. Gibbs also won the ARCA Menards Series East race at Toledo Speedway.

Gibbs led the field when ARCA officials threw the yellow flag on laps 20 and 55 for five-minute breaks for teams to pit their cars.

Only eight drivers of the 20 car field finished on the lead lap. In sixth place was rookie, and the most recent winner at Talladega Superspeedway, Drew Dollar. Rookie Hailie Deegan finished seventh and Derek Griffith, making his first career ARCA Menards Series start, finished in eighth. Ryan Huff and Scott Melton rounded out the top 10 finishers, in ninth and tenth, respectively.

Gray began the race with a pass-through penalty due to switching lanes before he crossed the line to begin the race. He found speed in his No. 17 DGR-Crosley Ford. Unfortunately, after he ran his fastest lap of the race, he made contact with the wall which proved terminal to his race.

“I’m definitely bummed but it’s the price you pay for being dumb,” Gray told Fox Sports 1 after his DNF left him with a 15th place finish. “It’s 100% percent on me. We knew we were too free to start the run. I just pushed the issue and it was too early to do that. I’m definitely disappointed in myself.”

Self remains the series points leader. His teammate Dollar is in second place, 11 points behind. Deegan is 14 points behind in third place. Holmes is in fourth place, 24 points behind Self. Thad Moffitt is in fifth place, 27 points back, after finishing last (20th) due to a blown engine on lap 2 of the race.

This arrogant and entitled kid demonstrates that local racing heroes are ignored while Princes of the “sport” get foolproof opportunities.
Joe Gibbs, you’re proud of this spoiled child???

He is vain. Worried about his hair more than his sponsors or team. They should have had a mirror instead of a microphone at the interview!

I see presidential material there.

I forgot about the ARCA race coming on Friday night. On Saturday morning I saw who won and was glad I missed it. Can’t stand this kid.