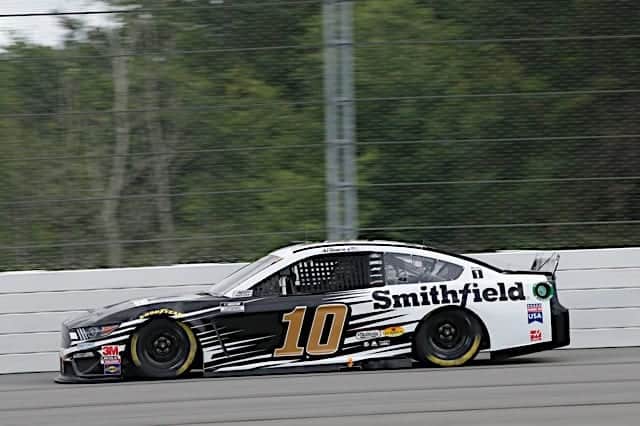 After drawing the pole for Saturday’s race (June 27) at Pocono, Almirola proved to have the dominant car from the drop of the rag. In a short 25-lap opening stage, the No. 10 would dominate until a late caution flew, allowing Joey Logano to get by for the stage victory. Still, Almirola placed second.

In the second stage, Almirola remained in cruise control, getting the lead back from Logano before making a pit stop shortly after lap 40. Ultimately, his crew chief, Mike Bugarewicz, split the race into thirds, allowing the No. 10 Ford to make it to the end on two pit stops. Because of that, Almirola won stage two, ahead of Logano.

Come the final stage, Almirola led until he pitted on lap 93. Because he needed a full tank of fuel, the No. 10 car took four tires, while others, including Kevin Harvick and Denny Hamlin took two tires, opting for a shorter stint on pit road.

When green flag pit stops cycled out, Almirola was in fifth, making ground and passing Kyle Busch and Christopher Bell, who both took two tires. When the checkered flag flew, Almirola rounded out the podium in third for the second consecutive race.

“If you told me I was going to finish third, finish second in a stage, win a stage, I would have said, I’ll take it, let’s not even go,” Almirola said of his race at Pocono. “After the car we had, leading all the laps that we led today, man, it was a hard one to lose.

“We opted to go and score as many stage points as we could and try to out-point them today.  It got us a couple spots short of a victory. […] We’re keeping momentum going, three top fives in a row.”

Three consecutive top-five finishes, indeed. Almirola started off the recent hot stretch of racing — the best of his career — with a fifth-place finish at Homestead-Miami Speedway. On Monday (June 22), he put his superspeedway skills to use, spinning across the finish line in third. He backed that up — and more — by leading 61 circuits at Pocono, a track he hadn’t seen much prior success at.

Even though Almirola came up short, he’s staying positive, believing his time is right around the corner.

“I’m proud of the cars we’ve been bringing to the racetrack. […] When we get on these rolls like this where you consistently run in the top five, it just builds so much confidence in myself, in my crew chief, in my team guys.”

With 12 races remaining in the regular season, Almirola sits 11th in the championship standings, 83 points above the cutline. On Sunday (June 28), the second race of the Pocono doubleheader, he will roll-off 18th, using the same No. 10 car he used on Saturday.