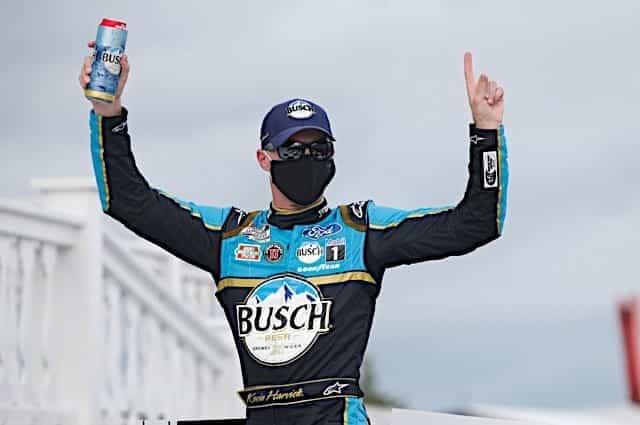 For most of the first 100 laps of Saturday’s Pocono Organics 325, few drivers were able to do much in the way of getting past Aric Almirola.

But with the stroke of pit strategy, Kevin Harvick did just that, getting his first win at Pocono Raceway and his third overall of the 2020 season in the NASCAR Cup Series. NASCAR’s top division races at the Tricky Triangle again on Sunday.

“We weren’t where we needed to be to start the race. We lost a bunch of track position,” Harvick said. “We came back, made some great strategy calls, and were able to get out front and make some good laps.”

Kevin Harvick says he's not doing any victory celebrations until the fans come back. No burnouts, no standing on the car, etc. Says he misses the fans and misses being with his team in victory lane.

Almirola, looking for his first win in NASCAR’s top division on a non-superspeedway, led a race-high 64 laps and looked to be on the way to the win. But when the leaders pitted with 36 laps to go, Almirola took on four fresh tires while Harvick’s crew chief Rodney Childers was able to just change two tires. The pit call shaved time off in the pits for Harvick during the final round of green-flag pit stops. The built-in advantage, coupled with the caution flag not flying the rest of the way, prevented Almirola from being able to rally back.

Almirola, however, took a lot of solace in the amount of points gained by finishing in the top three of all three stages on Saturday.

Denny Hamlin charged late, coming within about half a second, but was unable to get past Harvick. Hamlin persevered in the closing laps despite reporting a vibration to finish second. Almirola ended up third ahead of Christopher Bell and Kyle Busch. The rest of the top 10 was rounded out by Martin Truex Jr., Clint Bowyer, Michael McDowell, Brad Keselowski and Chris Buescher.

Outstanding job by the entire @Team_FRM organization to bring us a really fast @FordPerformance Mustang today at @PoconoRaceway!

Drew put together a great strategy and our No. 34 team did awesome on pit road all race long.

Ready to do it all over again tomorrow! pic.twitter.com/IMkuvFpsXR

Almirola used starting from the first position to his benefit, leading the first stage until being passed by Joey Logano with five laps to go. Almirola finished second in the stage and beat out Logano to win the second stage. Overall, Almirola led 33 of the first 45 laps.

The caution flag flew three times for on-track incidents. The most noticeable came on the 71st lap.

Both Erik Jones and Tyler Reddick saw hopes of a solid run come to an abrupt halt six laps before the end of the second stage. Jones checked up to avoid a slower Kurt Busch to the outside coming out of turn 3, and he collided with a surging Reddick to his inside. Both made significant contact with the inside wall of the frontstretch. Jones’ car was unable to continue while Reddick nursed his wounded Chevrolet back to the attention of his pit crew.

If either driver opts to use a backup car for Sunday’s race, they’ll be required to start from the rear of the field.